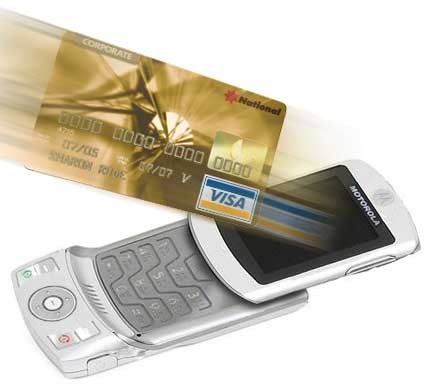 You may be content to shop online. Or, you may be the type who enjoys the occasional (or, God help you, chronic) visits to Home Shopping Network or QVC on the television. Perhaps you're old-school and prefer mail order or picking up the land-line to place orders with some underpaid Indian telephone attendant who will gladly take your credit card information and shipping address. I don't know - maybe you shop at Circuit City.

What if the world was about to change?

What if manufacturers realized that verbalizing or typing in orders was simply too much work?

What if you just had to click the equivalent of "Me want. Send now." and it arrived at your door?

Such is the dream of m-commerce proponents. M-commerce is short for Mobile Commerce, and like e-commerce before it, it aims to make purchasing goods much more of a "reactive" and easygoing experience. Let me paint a picture:

You're riding on the 'L' train in Chicago and see a billboard. The Billboard says "Edible remote controls - 5 packs in fruity flavors! Order now with code: R5FF7Q" Wow, edible remote controls - what a concept! I've got to have it! You pop open your cell phone, click on a QuickShop icon, enter in the 6-digit alphanumeric, select quantity, hit 'confirm' and - BANG - the product ships to you. Sweeeet (literally!)

You see, the phone already has your preferred shipping address stored. Credit card info is on file with the system and all you really need to do is indicate the product you'd like to ship. Everything else... well, it just happens.

THIS is the dream of retailers everywhere. Tapping into the impulse buyer and providing a way to elicit new ways for them to make purchases (act upon their impulses). Is this a Good ThingTM? I don't know. Like anything else (credit cards, bank loans, chewing gum) it can be used for good or evil. It's up to whether you are a controlled person. The convenience certainly cannot be denied.

But What About Security?

Security is certainly an issue, but not one that is very difficult to overcome. Biometric fingerprint readers are already starting to show up in consumer-level products everywhere and with the advancement of technology, it won't be long until that type of feature is readily available on most cell phones. Right now in fact, Sharp and a company called Pantech already have models under development that will read fingerprints to lock and unlock the phone. Biometric security isn't necessarily foolproof, but neither are credit cards or signatures. I don't know about you, but that pretty much makes all of this e-commerce "theory" look like a very realistic potential.

For years retailers have been discussing ways to modify the current system and "free" the consumer from the current constraints of shopping at a location or having to go somewhere to seal the deal. Here are some interesting progressions that have taken place to direct the market towards these ends:

You may wonder what all of these items have in common. The answer is that they form the groundwork of a commercial system whereby consumers are able to purchase goods through the use of mobile devices.

So What's the Hold-up?

Are the cards stacked against m-commerce? Yes and no. There are certainly details to be ironed out and systems to be put into place, but ultimately I believe the market can bear it and will, in fact, make demands for it sooner or later. The general "hold-up", as it were, can be any of a number of things - any one of which is a stumbling block to moving forward with m-commerce:

Unfortunately, the next steps seem to involve waiting. With Apple's new iPhone I had hoped they might break through into this new way of thinking, but indications of this are unclear. They certainly seem poised for m-commerce, however we have not yet seen clear direction from them that this is something being pursued on a large enough scale as to seem significant. In addition, they have done several things to limit their influence:

The good news, is that should Apple decide to pursue some form of m-commerce, even on a smaller scale, even a modicum of success may be enough to spark the revolution.

Here's to a revolution!

Read the Complete Thread
carlowhite posts on August 29, 2013 02:15
Today, it's never been impossible to shop right in to your phone. Before the smart phone, a person that was out shopping would have to base their decision solely on the price and what they could determine from having the product in front of them. Now, it is perfectly normal to see a customer looking at a product, talking to a salesperson, and searching the web for additional information. This type of comparison shopper is the new norm. In many instances, a company’s web presence makes or breaks a deal. A quick Google search on their phone or tablet tells them what they need to know. Find out more mobile commerce at Intelligent Automated Bulk SMS Text Marketing - FREE DOWNLOAD.
franksummer posts on August 24, 2013 00:51
With today's great innovations, it is never impossible to make everything you wanted in just a click away just like even shopping at your mobile phones. Well, while it may sound like science fiction, the technology is not too far off. More often, technology already reach NASA that has made provisions for astronauts who need to pay bills or shop online while on missions in space. At the rate things are going, it isn’t too hard to imagine a colony someday being established on the moon or on other planets. When that day comes, it only makes sense that the colonists there will need to make purchases from space just as today’s astronauts do. So while it is still a ways off, don’t be surprised if some day mobile commerce from space becomes a reality.