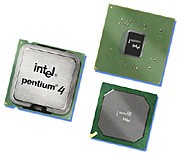 In one of the most significant PC platform changes in a decade, Intel Corporation today announced products that usher in a range of audio, video and other capabilities previously found only on specialty PCs. In addition to making the PC experience more entertaining and productive, these technologies pave the way for such emerging capabilities as High Definition (HD) video, 7.1 surround sound and robust file protection for office and home users.

"Intel innovation is taking the PC through a significant evolution that opens up a broader set of new consumer uses," Burns said. "This evolution will help people to better enjoy digital music, photos, videos and games on PCs and other devices in and around the home. At the same time, the technologies we are introducing for the PC platform will help drive new uses that boost office productivity, such as simultaneously using multiple monitors with just one PC to work on and track several projects."

A trio of new Intel® chipsets - the "glue" between the microprocessor and the rest of the PC - and several new Intel® Pentium® 4 processors supporting Hyper-Threading Technology (HT 1 ) are the foundation of these new platforms. PCs powered by Intel® 915 G/P and 925X Express Chipsets, formerly codenamed Grantsdale and Alderwood, became commercially available worldwide today. These new chipsets are coupled with the latest Pentium 4 processors supporting HT Technology 5xx sequence, which are built on Intel's most advanced 90nm manufacturing process technology and run at speeds up to 3.60 GHz.

Advanced Sights and Sounds
Audio quality on the PC is upgraded with Intel® High Definition Audio, which supports 7.1 surround sound. The proliferation of DVDs (more than 1 billion were sold worldwide in 2003 2 ) coupled with the rapidly growing availability of high-definition video content raise the importance of advanced audio. These events are leading up to making the PC an "all-in-one" entertainment device.

The new platforms support other compelling new audio capabilities, such as the ability to use a simple software setting to turn all the output jacks on a PC into headphone jacks so several colleagues can listen simultaneously from the same PC in a quiet environment. This ability gives the consumer much more flexibility in configuring how audio plays or is recorded on a system. The Intel High Definition Audio solution also allows the unique capability of sending multiple sound streams simultaneously through the PC's output jacks, allowing one user to listen to an MP3 with headphones while another user is watching a video with multichannel surround sound from the same PC.

Also introduced is Intel® Wireless Connect Technology 4 , which enables consumers to set up and configure a wireless home network in four steps. On systems configured with an optional version of an Intel 915 G/P or 925X Express Chipset plus a separate Intel® PRO/Wireless 2225BG Network Connection solution, this feature allows for easier sharing of digital videos, photos and music in and around the home or office. It also allows for multiple wireless-enabled PCs to share one Internet connection or printer. Intel® Wireless Connect Technology has been introduced with systems expected to be available in limited quantities later this year.

"These new technologies will help drive the digital revolution in the home and make the digital office more secure and productive," Burns said. "The Intel 915G Chipset is a key component of the desktop platform for the next iteration of the Intel® Stable Image Platform Program (Intel SIPP). Intel SIPP can help companies reduce IT costs by simplifying the testing, deployment and management of their PC infrastructure."

Improved Graphics Capability
Integrated into the Intel 915G Express Chipset, the Intel® Graphics Media Accelerator 900 (Intel GMA 900) will provide new graphics features particularly suited to digital home and office applications. For example, one function allows workers to use dual-independent displays - utilizing multiple screens with just one PC - to make use of old monitors and be more productive. Video editors and people analyzing multiple sets of data are just a few of the users who will benefit from this capability. Additionally, support for wide screen LCD televisions has been added to the Intel 915G Express Chipset, including support for cutting edge HD-TV formats such as 1080i. Today's 3-D entertainment on the PC is demanding increased performance; special new features being used in many of today's cutting-edge games are supported by Intel GMA 900.

Upgraded Internal Infrastructure
In a major boost to the computer's video, graphics and overall data throughput performance, the Intel 915 GP and 925X Express Chipsets will be Intel's first PC chipsets to feature a new higher-speed memory called DDR2, which provides headroom for the continued growth of PC platform uses. They will also feature PCI Express* bus architecture, a new, higher bandwidth bus technology with up to 3.7X the throughput capability 6 of the decade-old PCI standard. This increased bandwidth coupled with the multitasking benefits of HT Technology optimizes playback and simultaneous recording of HD video content, allowing a user with an HDTV tuner and appropriate software to watch a movie while recording a television program at the same time on just one PC, all in crisp HD quality.

Additional technical information about the Intel 915 G/P and 925X Express Chipsets is available at: http://developer.intel.com/design/chipsets .

Systems and motherboards with these processors and chipsets are currently shipping in volume with solutions available from major OEMs and more than 150,000 Intel® Resellers around the world. For more information visit www.intel.com/reseller .


Intel, the world's largest chip maker, is also a leading manufacturer of computer, networking and communications products. Additional information about Intel is available at www.intel.com/pressroom .

Intel and Pentium are trademarks or registered trademarks of Intel Corporation or its subsidiaries in the United States and other countries.

* Other names and brands may be claimed as the property of others.

1. Hyper-Threading Technology requires a computer system with an Intel® Pentium® 4 processor supporting HT Technology and an HT Technology enabled chipset, BIOS and operating system. Performance will vary depending on the specific hardware and software you use. See www.intel.com/info/hyperthreading for more information including details on which processors support HT Technology.

6. All numbers are based on theoretical maximum concurrent bandwidth.