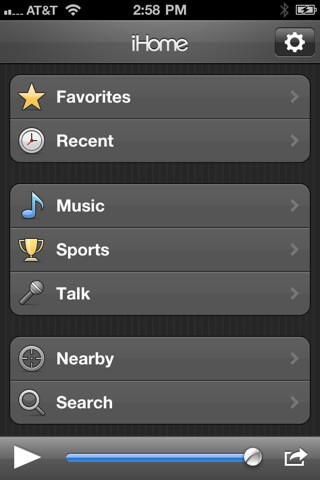 iHome, a leading supplier and pioneer of innovative iPhone/iPod speaker solutions, announced that iHome+Radio is now available for download on the iTunes App Store for $1.99. iHome+Radio is an Internet radio music app that uses RadioTime's program guide to deliver tens of thousands of local and international internet and broadcast radio stations to your iPhone and iPod.  The app also provides added functionality to iHome's app-enhanced line of speaker systems.

"iHome+Radio is a great stand-alone app for enjoying a multitude of Internet radio stations from around the world," said Evan Stein, Vice President of Marketing, iHome.  "However, when integrated with one of our app-enabled units like the iA5 and our award-winning iHome+Sleep app, the level of enjoyment and overall experience is enhanced, giving our customers the ability to sleep, wake or casually listen to their favorite radio stations from around the globe, regardless of their location."

iHome+Radio is powered by RadioTime to give users direct access to tens of thousands of Internet music, talk, sports and news stations locally or from around the world.  Today, iHome+Radio supports stations streaming in MP3 and AAC formats, and will be adding more formats available from RadioTime in future releases.  iHome+Radio syncs with a user's presets stored on RadioTime.com for a seamless extension to a mobile device.

The new app also works with iHome’s "App-Enhanced" products to transform the units into an Internet radio for full range audio performance and a new level of alarm clock.  Music fans can sync their favorite stations stored on iHome+Radio to iHome+Sleep, where the stations are then made available as Bedtime and Wakeup music options.

iHome+Radio also includes controls and settings for iHome's app-enhanced product line, so customers of the iA5 and the upcoming iA100 will benefit from some of iHome’s exclusive innovations.

iHome+Radio is now available for $1.99 on the iTunes App Store.  For further information, please visit http://www.ihomeaudio.com/apps/ihomeradio.asp.

About iHome
iHome was established in 2005 as a division of SDI Technologies to develop and market iPod electronics.  The first iHome product introduced, the iPod Clock Radio, was an exceptional success that became the top-selling iPod accessory for the year, and firmly established iHome as the premier brand in the iPod electronics market.  Since then, iHome continues to be the #1 brand in iPod/iPhone docking speakers according to NPD data and has been at the forefront of design with a growing lineup of award-winning iPod-compatible audio products that includes alarm clocks, clock radios, portable and home speaker systems, headphones and charging stations, as well as a new licensed line of computer accessories.