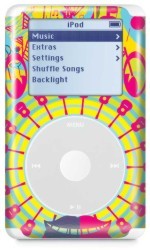 MIAMI, Aug. 27, 2004 - HP today announced its expansion into multiple new consumer digital entertainment and digital photography categories with a range of offerings aimed at making it easier than ever for people to live digitally. The offerings include new digital cameras and photo printers, home theater projectors, plasma and LCD flat-panel TVs, entertainment-based notebooks and desktop PCs, and the Apple iPod from HP - all in time for the back-to-school and holiday shopping seasons.

Highlights of today's announcement include:

HP makes it easy to create high-quality, affordable photos at home
HP is taking digital photography to a whole new level by making it easy and affordable for people to click, print and share high-quality photos. HP's new digital cameras and photo printers, which are supported by a new line of branded inks and specialty papers, make it better, faster and cheaper than ever to print at home and even on the go. 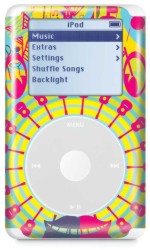 New HP Printable Tattoos allow consumers to personalize the look of their iPod with album cover art from top bands and recording artists, as well as to create their own personalized artwork and photos printed on Tattoo media via an HP color printer.

The ultra-thin HP Printable Tattoos are easy to apply and remove from the player's exterior. They are durable and water-resistant, which helps protect the iPod from scratches and scuffs as music lovers carry it around. HP is working with industry recording studios to offer consumers access to the latest album art from the newest releases. The HP Tattoo Gallery at http://www.hp.com/music will be regularly updated with the hottest album art, so consumers can continually personalize their iPod.

Consumers can quickly start enjoying their iPod with the help of HP's unique user guide and an easy-to-follow setup poster. In addition, the Apple iPod from HP is backed by HP's Total Care customer support, which includes one year of phone support and a one-year warranty.

New wave of advertising to debut at VMAs
HP will debut new advertising campaigns during the MTV Video Music Awards on Sunday, Aug. 29. Award-winning music video producer Paul Hunter directed the suite of music ads that will launch the Apple iPod from HP. New digital photography ads, showcasing the latest photo printers, including the new Vivera Inks, digital cameras and printers, will feature the innovative artistry of French director Francois Vogel and the song "Picture Book" from the Kinks.

HP and MTV kicked off the first phase of this strategic marketing partnership by announcing a global promotion called "YOU Are Your Music." At the end of September, consumers in the United States will be able to enter a promotion to win a trip to the 2004 MTV Europe Music Awards in Rome by submitting a digital photo of an image representing "what music means to them." The promotion will continue in Latin America, Europe and Asia, where the contest will launch around MTV's award shows in those regions.

Detailed information regarding HP's digital photography and entertainment offerings, including fact sheets and product specifications, is available in an online press kit at http://www.hp.com/go/digitalexplaunch/2004 . A recorded webcast of the press conference featuring Fiorina's unveiling of the new digital lineup will be available at http://www.hpbroadband.com/program.cfm?key=B3Launch27Aug2004EXT shortly after the conference ends, and will remain available for approximately one month.

(1) With compatible 802.11g and b devices. Wireless performance is dependent upon distance and terrain between wireless network clients and all-in-one.

Bluetooth is a trademark owned by its proprietor and used by Hewlett-Packard Company under license. Intel and Centrino are trademarks or registered trademarks of Intel Corporation or its subsidiaries in the United States and other countries.