Hologram Projectors - The Next Portable Must-Have? 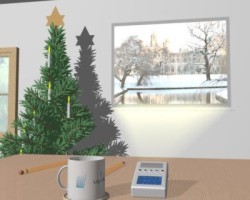 Nic Lawrence, Edward Buckley, Adrian Cable and Peter Mash, researchers within the Photonics and Sensors Group at the University of Cambridge, Department of Engineering are developing ground-breaking holographic technology, which will power a new generation of pocket-sized digital video projectors. Digital video projectors that produce large, high quality images are becoming increasingly popular, but there are limitations in the technology that make miniaturisation very difficult, preventing projectors from making inroads into the potentially lucrative mobile device markets.

Holographic projection of 2D (rather than 3D) images represents a compelling alternative to conventional image projection. Holograms are efficient: they work by routing light to the places where you want it, and away from the places you don't. Video projectors based on this holographic technology require only a very few components, which means they can be made very small - and the smaller you make holograms, the better the image that results. So a projector could be integrated into a laptop, a PDA, or even a mobile phone.


Why has this not been done before?
The concept of a holographic projector is not new, but up until now technical issues have prevented development of an actual product based on this technology.

-- Holograms are extremely complex objects mathematically, and calculating them fast enough for video applications is very difficult; even the most powerful computers would take minutes to generate a hologram to project just a single video frame.
-- The projected images produced by holograms tend to be speckled and of very low quality.
-- The lasers that are required to illuminate the holograms have, until very recently, been very expensive and limited in availability.

In the Photonics and Sensors Group in the Department of Engineering, , liquid crystal over silicon (LCOS) devices have been developed for real-time holographic displays as well as applications in telecoms systems. Several major breakthroughs have been made, together making possible the generation and display of high quality holograms at video frame rates, using just a single custom chip that Nic Lawrence and his team have designed.

Light Blue Optics has been set up as a spin-out company in order to commercialise this ground-breaking research through exploitation and development of their strong IP portfolio. Light Blue Optics is currently developing links with a number of industrial partners, and welcome contact from companies potentially interested in integrating this technology with their products.

How does it work?
A hologram pattern, which to the naked eye looks like a collection of random dots, is displayed on a small liquid-crystal-on-silicon (LCOS) microdisplay - a tiny, very fast liquid crystal display built on top of a chip. The hologram patterns are calculated by Light Blue Optics' proprietary "hologram chip" so that when the microdisplay is illuminated by laser light, the light interferes with itself in a complex manner through the physical process of diffraction which, when carefully controlled, results in the formation of a large, high quality projected image on, for example, a screen or a wall. Unlike a conventional video projector, heavy, bulky lenses are not required: diffraction does all the work for you, and the projected image is sharp and in focus at any distance. What will this lead to?

There are a huge number of applications for this technology in fields including business, home entertainment, automotive, aerospace and advertising. At present, the focus is on 2D applications, in particular tiny personal projectors for business and home use. The illustration shows an artist's impression of a potential early product - a personal video projector, which you could download movies to and then play anywhere, using a wall as the screen. In the future, the same technology could be extended into 3D applications - while this is some way away yet, the technology could bring the holographic video displays of science fiction one step closer to reality. 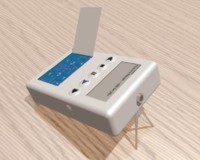 When will products be in the shops?
At present, Light Blue Optics has a lab-based demonstrator, which converts a standard composite video signal into high-quality 2D holographic video, in real time. The hologram generation engine runs in a commercially available FPGA (field-programmable gate array) chip, whose design extends naturally to cheap mass production. Other processing platforms including low-power digital signal processing (DSP) ICs are also under development. Light Blue Optics is working with several strategic partners to further develop this technology into real products. It is envisaged that devices based on this technology will be in the shops in the next two to four years.

Dr Nic Lawrence is an Embedded Researcher within the Photonics and Sensors Group at the University of Cambridge, Department of Engineering.