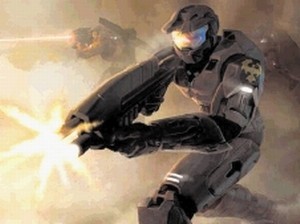 The latest installment of the Halo franchise, Halo: Reach, has become the most popular game on Xbox Live. Microsoft’s online gaming service, exclusive for Xbox 360, has been dominated recently by Call of Duty: Modern Warfare 2. Since MW2 has broken records as the most popular video game of all time, who knows what haloed sales figures the latest Halo might have reached? But it has to be said - console exclusives are a raw deal for developers – not to mention anyone with the wrong console.

Microsoft announced on the day of its release that Halo: Reach sales topped $200 Million. That’s a lot of copies for a game destined to remain a console exclusive for Microsoft’s Xbox 360. The current heavyweight champion of video game sales is Call of Duty: Modern Warfare 2, which sold 4.7 million copies in its first 24 hours of release. Earning $310 million tops not only any video game before it but all media, including movies.

By now you’re aware that Halo: Reach takes the Halo story from the beginning. It’s a prequel to the first Halo that has grown into a legendary online, multiplayer, first-person franchise. The campaign game won’t disappoint the dedicated fans of the franchise and should make up for any doubts that emerged after Halo 3 back in 2007, which received mixed reviews at best.

The Halo: Reach story can be described as grandiose, with graphics to match. From the initial invasion by Covenant forces to the details of Noble Team and its heroic journey to save the planet, it’s non-stop, classic first-person action. You’ll play your small role in grand battles and like the other Halo games, get behind the controls of some of the most advanced weapons and vehicles ever conceived.

If you’re a Halo veteran, I want to recommend you start the game on Heroic difficulty level rather than Normal. Solo action is so much more intense and will test you with better enemy AI and force you into a more tactical experience. It doesn’t simply add up to a greater number of enemies as is seen in other FPS action games when you bump up the skill level, Heroic over Normal is a true game-changer.

But let’s face it, many of you will run through the single player game in a day and spend the rest of your time online in multiplayer. You’ll be happy to note there are tons of new multiplayer options in Halo: Reach. Best of all are the customizable battles you can engage. You’re able to set everything from gravity levels, hit tolerance to weapons availability. Try a zero gravity hammer-only match for some utter chaos.

A lot has been said about the future of Halo. Rest assured, based on sales, Microsoft isn’t going to let the Halo franchise die. But the involvement of Bungie has ended. The games developer has said that Halo: Reach would likely be its last Halo game. This has been all but assured with Bungie’s recent announcement that it’s entered a 10-year agreement with Activision.

Bungie’s Brian Jarrard and Joseph Staten recently spoke on the Activision deal and said that there will be no more Halo for Bungie. Jarrard and Staten spoke of an upcoming “crazy, ambitious” project that the whole of Bungie will be dedicated to for the next ten years with Activision.

It will be interesting to see what Bungie and Activision come up with, and to see what direction Microsoft takes the Halo franchise now that Bungie is gone.