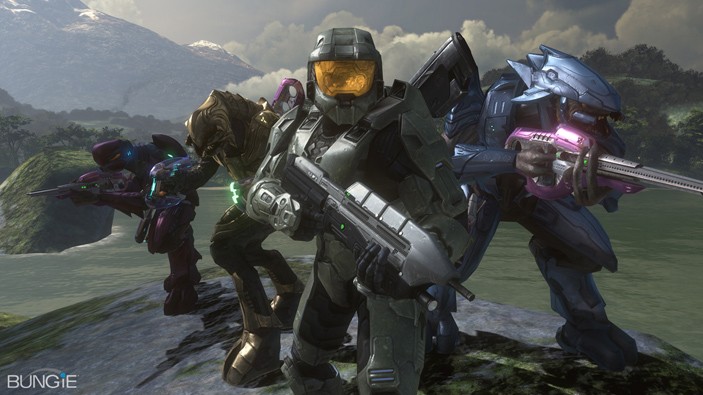 We at Audioholics have been fans of Halo and Bungie games for some time now, however a recent foray by myself and Tom Andry into Gears of War left us with a salivating desire to see more co-op games arrive on the Xbox 360 scene. With the pending Halo 3 being released soon we were salivating over the prospect of Xbox Live co-op.

The trouble is those rumors were just rumors. Bungie would never confirm, and actually seemed to be shying away - stating that multi-player co-op is tough due to the map sizes and issues of vehicles, separation and distance.

Fortunately, all of the speculation can now end. Bungie has announced not only co-op in the upcoming release of Halo 3, but FOUR PLAYER co-op mode which works through the main storyline.

Here is their official announcement:

It’s time for us to sack up and tell you what’s what regarding online co-op.

So you were probably wondering why we didn’t want to commit to two player co-op online over Xbox Live. We certainly got plenty of mail asking, no, demanding that we make it happen. Of course we were working on it, but we were also working on something better. Not two player co-op. Not three-player co-op, but up to four player co-op. Online. On Xbox Live, or sure, System Link if you prefer.

That is correct – up to four player co-op in Campaign mode on Xbox Live or System Link.

We’ve been playing it for quite some time, and bluntly, having some of our greatest ever Halo experiences. We wanted to make sure all our “t”s were crossed and our “i”s dotted before unveiling this important new part of Halo 3’s Campaign mode.

Apart from the horrifying network challenges this new mode presented us, were the various gameplay balance issues it adds to the fray. So we got it all together, polished it, and that’s why we’re revealing it now. As a result, you’re going to want to play co-op as hard as you can stomach it. We’d certainly recommend Legendary, but we’ll be revealing some more ways to make the game more interesting and challenging for multiple players in the very near future.

Acting as a team is a fantastic new twist to the Campaign gameplay – something that works as well on foot, in close confines as it does on the battlefield, with large scale vehicle mayhem. Scared of Jackal snipers? Send out a scout to see what dangers lie ahead. Terrified of an open field? Flank your enemies and swipe their rides. The combinations and scenarios are endless – and you’ll be able to enjoy them time and time again in Saved Films of your co-op exploits.

We mentioned that we’ve been having a blast. We have a lot of stories. Many of them would require that we explain some of the reasons replay will be a big factor, but not quite yet. Soon, we promise.

Like every other aspect of Halo 3, this mode is chosen from a Lobby. Simply select Campaign, choose your network (Xbox Live or System Link) and invite your friends to join you, or they can simply join your session once it’s set up and in a lobby (but they cannot join a game once it’s in-progress). They will pop into your lobby instantly, and when you have all the players you need (anywhere from one to four) you can begin the game from the beginning – or from any of your saved checkpoints.

Split-screen co-op is as ever, limited to two players per screen – but they can if they wish join two other friends online or via System Link.

For fictional reasons, we decided to avoid Halo’s slightly surreal compromise of two identical Master Chiefs and rather, use this opportunity to expand the Halo universe just a little bit. Player one will control the Master Chief, player two will control the Arbiter and players three and four will get the chance to control two brand new Elite characters.

The new players will include the Arbiter, but will also bring in two new Elite characters:

Name: N’tho ‘Sraom
Affiliation: Fleet of Retribution/Special Warfare Group/Special Operations
History: N’tho ‘Sraom is the youngest member of his Special Operations unit and is one of a growing number of human sympathizers amongst the Sangheili youth. He is a fairly typical young male adult Sangheili—he began compulsory military service at the end of adolescence, and remains unmarried with no close, non-familial relationships outside of his martial order. N’tho Sraom refused to stand idly by while the Prophets replaced Sangheili units with Jiralhanae packs, and now bears deep resentment toward those Sangheili politicians who landed his kind in their current predicament.

Although N’tho ‘Sraom’s romanticized nationalism is emblematic of all Sangheili, he has developed a healthy respect for humanity—not for their physical abilities or martial prowess, but for their audacity and resolve.

Name: Usze ‘Taham
Affiliation: Fleet of Retribution/Special Warfare Group/Fleet Security
History: Although Usze ‘Taham was born into a respected merchant family he was fathered by Toha ‘Sumai—one of the preeminent swordfighters of this age. Usze graduated with honors from the top War College in the Iruiru region of Yermo, Sanghelios (a distinction he shares with Rtas 'Vadum). Shortly after receiving his first post within the Covenant Navy he was offered a place on the Prophets’ Honor Guard but he declined citing “lack of practical experience”. In truth, he had no desire to be part of a largely ceremonial unit, and at the end of his third combat tour, Usze ‘Taham again refused the post—even though his superiors warned him such behavior could be misinterpreted as apostasy.

Since that time Usze has evaded countless punitive actions, at least two assassination attempts, and served with distinction for two additional tours before the Schism. Following the dissolution of the Covenant, he was approached by the Ascetics to become one of their liaisons within the Navy.

All players will have identical abilities but the initial weapons will be different for obvious reasons. We can't WAIT for the game to release and are looking forward to being able to work through co-op as a team, something we've only experienced through Tom Clancy's Ghost Recon Advanced Warfighter 2 to date...

bashful, post: 292686
“With the pending Halo 3 being released soon, and the fact that it's built on the Unreal 3 engine - just like GoW - we were salivating over the prospect of Xbox Live co-op.”

I can't believe I missed that. There's no way Halo 3 uses the Unreal 3 engine…as Bashful says, it wouldn't work for the type of game that halo is.
bashful posts on August 06, 2007 10:04
Uh, there is a MAJOR MISTAKE in that article

“With the pending Halo 3 being released soon, and the fact that it's built on the Unreal 3 engine - just like GoW - we were salivating over the prospect of Xbox Live co-op.”

I assure you, you guys are the only people in the media to have come up with something like this… it has never been stated by Microsoft or anyone else.

Microsoft owns the majority of the engine components in Halo3. Sure, there's Havok and a few other 3rd-party bits in there. But no Unreal 3 engine! Their Bungie group basically took their Halo 2 engine & toolsets and made it all work on the ‘360, with improvements of course.

There’s no way you could take a generic multiplatform product like Unreal 3 and do Halo 3 with it. Halo 3 is way too much of an envelope-pusher. Unreal 3 licensees make middle-of-the-road multiplatform games. (Gears is a special case… not done by a licensee, and not a simultaneous multiplatform ship either, made by the engine maker so they're customizing the engine and spending lots of time on it)
obscbyclouds posts on August 02, 2007 18:01
I think all the rampant cheating in Halo 2 really helped ruin the matchmaking system as well. Most of the higher levels cheated to some extent. Hope Bungie has made cheating more difficult than in H2, but i'm sure people will still find a way..
Post Reply