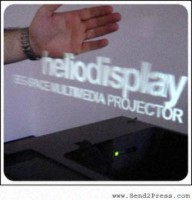 SAN FRANCISCO, CA - August 16, 2005 - IO2 Technology today announced on August 16, 2005 the release of its Heliodisplay(TM) projector, which projects video onto thin air. IO2 Technology creates and commercializes next-generation display technologies, and the Heliodisplay(TM), is the first such device released by the company. This revolutionary technology displays any video source in full, high-resolution color in free space, without need for a screen. After a year of development, the eagerly anticipated Heliodisplays went on the market today.

Consumer reaction to the units has been extremely enthusiastic. Viewers can walk around, or even through, the floating image, something possible only in science fiction until now. "IO2 Technology is opening a new frontier in video display technology," said Philip Liang, a researcher at the MIT Media Lab who bought two units immediately after previewing the Heliodisplay(TM).

Heliodisplays are available in projecting image sizes from 22 to 42 inches (diagonal), and is available with interactive features. IO2 Technology's website ( http://www.io2technology.com ), which has Heliodisplay(TM) units available for direct purchase, demonstrates how a user can move the image of a watch in mid-air with their finger. Instead of a mouse, a viewer uses their hand (no special glove needed) to move an image, or a finger to move the cursor. The Heliodisplay(TM) can be used for advertising, tradeshow displays, consumer-market applications such as movies and videogames, or any other use that employs a video display. 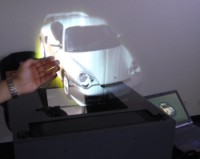 "This is only the beginning of what can be done with this technology," Liang observed. Chad Dyner, CEO of IO2, said, "Based on the initial reaction and feedback we've received, the consumer and commercial applications for Heliodisplay(TM) are endless. We've combined the unique display technology with innovative design and production to forge new possibilities for advertising and marketing as well as defense applications," Dyner continued. Dyner declined to comment on future releases, but said that a strong product pipeline is in development. According to technology industry sources, IO2's development units have larger and clearer images, leaving industry insiders and observers alike to wonder what will be next from IO2.

Discuss This Technology In Our Forums