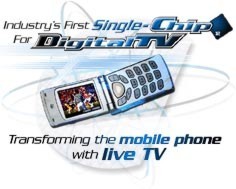 Code-named "Hollywood," this single-chip will receive live digital TV broadcasts using new television infrastructure that is being developed for cell phones. Subscribers will have access to different types of content including:

"Hollywood" will complement the video processing capabilities that OMAP processors deliver today to enable TV viewing on cell phones with the content streamed over the cellular network. "Hollywood" will take digital TV on cell phones steps further by bringing you the same TV you watch at home - but on your cell phone. Wherever you are, you'll receive live, crisp images at real-time speeds so you don't miss a second of your favorite show.

Inside "Hollywood"
While no single standard will be used worldwide, TI believes that the most prevalent standards will be those that are open and non-proprietary, including:

"Hollywood" will support both of these standards.

Because the "Hollywood" chip will use a separate air interface, not the cellular network, to transmit the TV signal, this will enable live digital TV to be broadcast in real-time (25-30 frames per second) rather than streamed over the network (1-15 frames per second).

Availability
TI expects to provide samples of the "Hollywood" chip to customers in 2006. TI's "Hollywood" offering will also include all needed software for television signal processing. The associated OMAP processor-based development platform will allow handset manufacturers to create customized user interfaces, enhancing the consumer experience. This is expected to enable manufacturers to launch products in conjunction with the first mobile digital TV infrastructure mass deployments in 2007.