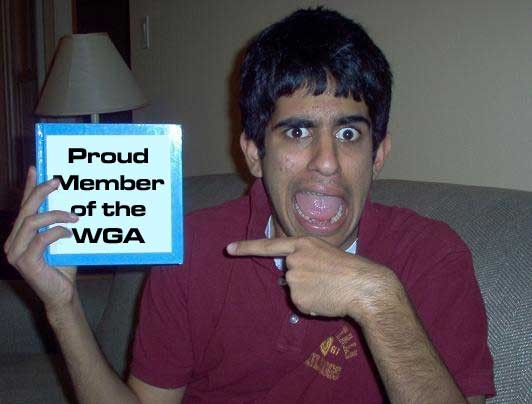 As with many things in Hollywood, there are a lot of behaviors that simply defy logic or explanation. One of those behaviors is centered around the rather unpleasant, yet common occurrence of actors, writers, directors, gaffers, electricians, beauticians, and shoe salesman striking on the day following the anniversary of contract renewals. Currently, we've just come off of a four month long strike by the Writers Guild of America which started back in November of 2007. These east and west coast unions represent just about all of the film, television and radio writers working in the United States. Like all unions, when they don't get what they want, they resort to the ridiculous practice of striking, which often results in putting thousands of other people out of work.

For most of America, if you're not happy with your job you move on and find something better. For Hollywood, if you're not happy, you stop working and put everyone around you out of business. With the median home price in the LA area costing around $550,000, you can just imagine how many people were absolutely tickled at the WGA's little temper tantrum over Internet download residuals. I guess everyone in Hollywood should be grateful, however, since the last strike in 1988 lasted almost two months longer (nearly 6 months). While most union employees will tell you (publicly drinking the kool aid at least) that it's the principle of the matter, we wonder how the lost 14 weeks of revenues (approximately $342.8 million in wages) will compare to the pennies the average writer hopes to earn in residuals with the new 3-year contract.

Remember, the wealthy A-list writers are the ones concerned with these residuals - enough to pitch a hissy fit (er, strike) over it. And make no bones about it, they are the ones stirring the pot for the union employees.  While the writers for shows like The Simpsons are worried about not making extra money from free-to-consumer, commercial-sponsored, Internet downloads, Johnny Q Writer should give a rats nest about the union negotiations for his meager writing contract that has little hope for national syndication. As with all politics, the average C-list employee and especially the poor guys who make up the rest of the production, post-production and broadcasting teams (who can't work since everything is shut down) all get royally screwed.

Former Paramount and Fox CEO Barry Diller also has stated the strike is "stupid." In comments to Fox Business Channel, he said, "There are no profits for the work that writers do that is then digitized and distributed through the Internet." Diller is currently the CEO of the Internet conglomerate IAC/InterActiveCorp. Diller also suggested that the writers guild should have waited five years to see where the revenues from new-media ventures were coming from. "We want to freeze this area until we can understand the revenues, which aren’t going to develop for another few years."

The basic premise of these contents is: We don't know what's going to happen with Internet downloads, why on earth would you spill your guts on something that isn't even realized yet. It's a lot like a guy feeling great about winning the $10 poker pot after the first hand... and then 12 hands later, after he's left the table, the pot is up to $15,000. Writers are negotiating on something that is worth almost nothing at present and, as such, have no clear idea how to best structure the deal for the future. The business model is in flux.

Of course, next comes the whole issue of the Screen Actors Guild. SAG is also apparently very concerned with residuals in new media and has been particularly supportive of the WGA's strike effort. Everyone is watching their reaction closely because if the new media issue is not resolved to their satisfaction by the DGA or WGA by July of 2008, SAG will likely follow suit and go on strike when their contract expires. And when SAG strikes, expect the entire film industry to grind to a second halt.

The same sort of vigilance will be needed to assist members of SAG and AFTRA.They are about to go through a similar process to the one we experienced. Their support of our cause was invaluable. We must use all our efforts and experience to support them as well. Further gains that they can achieve will have an immediate, positive effect on our contract.

Apparently, even the WGA (post-strike) expects SAG to go through intense, strike-inducing negotiations regarding Internet downloads and new media which could potentially result in a prolonged strike and subsequent loss of revenues and work throughout the country.

In a time of economic slowdown we can only ask these simple, practical questions:

After 14 weeks, did the strike TRULY accomplish anything or was everyone so desperate to get back to work that the negotiations become more political "save-face" in nature than practical. Ie. Did the WGA simply waste everyone's time and then act like 3 year old orphan getting her first pair of shoes for Christmas? The "believability factor" of this whole experience reminds me of some old atomic bomb propaganda films I have seen on YouTube.

So was it worth it? Did they truly accomplish anything worthwhile? Well, while many commentators supportive of the strike are saying yes, after analyzing the data I'd say there is absolutely NO benefit to the common employee given the amount of lost revenues and damage to the industry. Remember, it's not as simple as coming back to work, entire shows were canceled for the season, leaving hundreds of people scrambling for what is now a tighter job market. So what are some of the details:

Now, we'll have to hold out and see what happens when the SAG contract expires in June. Everywhere you turn it seems the expectation is that a strike will ensue. It's absolutely mind-numbing that they would cause another industry shut-down so soon, however as the above shows, we're not dealing with the clearest thinkers in the country. My only hope is that (please!) America does not turn to reality TV programming to fill the gaps. Folks, this is a great time to get your family in the habit of turning off the TV and playing together, going for walks or visiting with your neighbors.

Or as my Mom used to say to me when I was growing up: "Go outside and play!"

Read the Complete Thread
Clint DeBoer posts on March 04, 2008 09:55
IF I put on my “union hat” I'd have to say that the strikers blew their… er, moment… on something that resulted in almost no gains. BECAUSE online downloads are making almost no money, the unions had no real leverage. This isn't like DVD at all in my view.

Now, this strike has to last them for a while - cause if they pull this crap in 3 years, I think the day will come when people start pulling out of the union left and right. How many times can the average writer afford to have his entire industry shut down? How about all those poor guys who were lined up to work on this season of 24? Now they have to scramble for work, all so that some writer can make another $0.05 per download… maybe… after 24 days… if the download isn't free.

Of course I'd be all over that, but I'm a known anti-union guy anyway. I think they are worthless relics made up of people willing to pay to have their jobs negotiated and protected by what amounts to some sort of legal mafia.
aberkowitz posts on March 04, 2008 07:47

zipkin119, post: 383678
Some ignorance of history on view here. Writers and actors were told “wait till we see what the revenue stream is” once before, at the dawn of the DVD era, then that contract was used as a precedent to lock us out of the gusher of DVD revenues over the last two decades. The “stupidity” denounced by the CEOs is a direct reaction to the studios' policy over twenty years of keeping DVD revenues away from the creatives, and what has resulted is a "never again' militancy.

But how can you negotiate for something if you're not even sure that money will ever come out of it?? Online streaming makes NO MONEY today- and there's no guarantee it will make any money in the foreseeable future. Does it really make sense to bet all of your goodwill on the fact that one technology might emerge as the technology to make you all of the money? Why is it that the directors recognized this but the writers couldn't?
zipkin119 posts on March 04, 2008 05:00
Why the Strikes

Some ignorance of history on view here. Writers and actors were told “wait till we see what the revenue stream is” once before, at the dawn of the DVD era, then that contract was used as a precedent to lock us out of the gusher of DVD revenues over the last two decades. The “stupidity” denounced by the CEOs is a direct reaction to the studios' policy over twenty years of keeping DVD revenues away from the creatives, and what has resulted is a "never again' militancy.
As for the commenter who blamed the writers for the banality of TV, blame the execs, please. Most writers I know in TV are capable of far better than they're allowed to do, but they want to keep up payments on their mortgages, too.
rnatalli posts on March 03, 2008 10:44
TV sucks these days. Everything seems virtually the same. I would have fired every one of the writers and recruited some young blood from college campuses to start writing. There are plenty of talented people out there who want to write in Hollywood even for free.
Clint DeBoer posts on March 03, 2008 10:37
Yeah, just look what they did to your people!
Post Reply