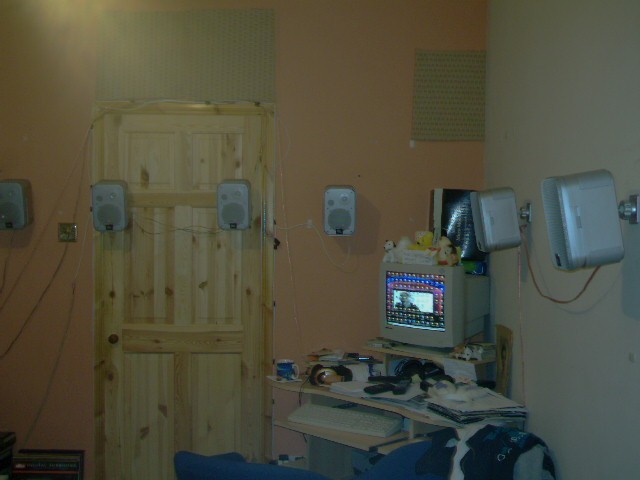 Dude, you need an upgrade...

D&M Holdings Inc. is launching an innovative web-based contest for Boston Acoustics® and Denon Electronics® in which consumers will be able to share homemade videos and photo essays for a chance to win a "Home Theater Makeover" featuring electronics gear, furniture and installation worth more than $17,000. The "Makeshifters" contest includes the participation of both consumer electronics giant Circuit City and leading furniture company La-Z-Boy.

Consumers will be able to enter the contest via a specially created web site, www.makeshifters.com, where they’ll be able to post homemade videos and photo essays that tell personal “home theater horror stories” about their makeshift home entertainment systems. Such makeshift systems might include a mix-and-match of outdated components (for example: a 13” CRT television hooked up to your grandfather’s 1960s-era stereo system, with PA speakers left over from your high-school garage band days).

In addition to being able to share their home videos and photos at the makeshifters.com web site, visitors will also be able to utilize Web 2.0 social networking features to interact by tagging, rating and reviewing entries, as well as virally spreading them, linking them to other sites and embedding them in emails or blogs (can you say "experimental marketing technique?) Entrants with the highest rated videos will be rewarded with a variety of prizes. The Grand Prize Winner will receive a total “Home Theater Makeover” that will include a high-performance flat-screen TV from Circuit City, premium electronic components from Denon and a complete Boston Acoustics surround-sound speaker package. Circuit City will provide the Grand Prize winner with a variety of DVD movies and music CDs, and send its professional Firedog technicians to install the system in the winner’s home. The First Runner Up prize in the video contest will feature a La-Z-Boy recliner and a $500 Circuit City shopping spree; and four third-prize winners will each receive selected home entertainment components from Denon and Boston Acoustics. (The total value of all prizes is over $25,000.)

Noted Mike Angiletta, VP, Strategic Marketing, D&M Holdings, North America. “With the Makeshifters campaign, we’re getting consumers involved in a fun interactive contest that lets them express themselves and share their stories while learning about how Boston Acoustics and Denon products can help enhance their lives. The goal of the campaign is to highlight the visibility of both the Denon and Boston Acoustics brands, reach out to new, particularly younger audiences, and educate consumers about our premium quality home entertainment solutions. By utilizing an exciting and fun new Internet medium, we’re also hoping to help eliminate some of the intimidation people might feel about home theater in general.”

Rewards will also be available through monthly “Quiz Prizes, ” as well as “Everybody is a Winner” Circuit City $10 Gift Cards for all entrants. For more information about contest rules and available prizes, please visit www.makeshifters.com.

Update: Congratulations to the winners!

Read the Complete Thread
highfihoney posts on May 31, 2007 16:51
I think between the booze & drugs most of us concocted some goofy a$$ systems when we were kids,ya smoke enough jibbers & drink enough Jack, even a home made wall mount grid kinda thing would sound great kickin out black sabbath.
avaserfi posts on May 31, 2007 14:52
This is one of those times I wish I had pictuers of what my friends and I wired up in highschool. One of our friends dads was going to junk his POS floorstands because the MDF was rotting (they were about 20 years old at the time) so we took it off his hands made a 2x2 grid with 2x4s and drilled a speaker in each section of the grid. It sounded amazing! Especially with our custom wall mounted installation…
majorloser posts on May 31, 2007 14:35
I won't tell him if you won't
Rowdy S13 posts on May 31, 2007 12:58
Im wondering how long it will take him to notice that?