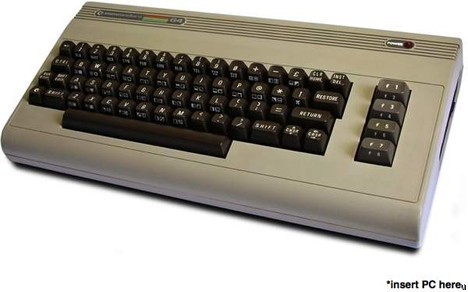 Commodore USA, the computer company permanently trapped in the 80s, will be rolling out its latest device known as the Commodore PC64. The new retro PC will apparently be powered by an Intel Atom processor and support up to 4GB of DDR3 RAM, and a SATA 1TB hard drive. We're not sure what the defaults will be, but there is some configuration possible. The all-in-one-minus-display includes an HDMI output allow people to play Pong on their TVs... just kidding... There is also a side-mounted optical drive that you can configure as a read/write DVD/CD or Blu-ray. This PC defined nostalgia and retro with its OEM beige Commodore case and hidden peripherals.

The goal is to have it hit shelves (or at least be able to be ordered online) in time for the holiday buying season and the expected retail price is between $475 and $1,295 depending upon how many configurations they offer. This is truly for those who want a conversation piece as it's going to be somewhat price-prohibitive for anyone looking for a value product.

So would you buy a retro Commodore PC64? Hit the link below and let us know in our forums.

skizzerflake, post: 746463
O my gawd….a Commodore? It's interesting, but why? I recall suffering with them way back when.

Suffer in what way? They were great systems in the 80's and for a good part of that decade there wasn't another system that could compete with them in both sound and graphics.
skizzerflake posts on August 28, 2010 01:15
O my gawd….a Commodore? It's interesting, but why? I recall suffering with them way back when. I hope they keep the blocky characters, cassette drive and crude graphics, but really…why?
gliz posts on August 27, 2010 14:14
iiiiiiiiii like it !
kevon27 posts on August 27, 2010 12:41
Ah man. This brings back memories. There was a time when computing was fun. We had competing platforms (Atari, Apple, Dos, Commodore, etc). Software were plentiful and priced well. Gaming on the C64 was awesome. I actually learned how to program when I was a kid (the manual actually taught you basic programming).
All in all I would not buy this new machine. Those day are gone, I'm a slave to windows (all hail master Gates). I don't program anymore (want something done, have someone else write the program, download it (open source) or just Bitxxxxxx it - just kidding I don't steal.
Post Reply