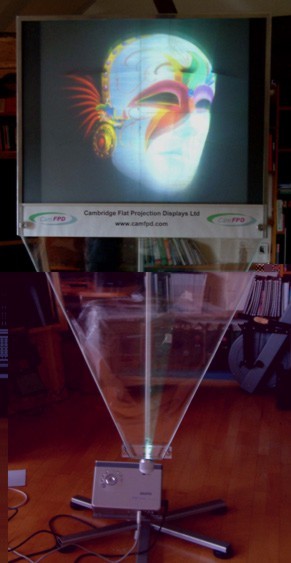 A Cambridge UK academic has come up with a completely new flat TV concept relying on total internal reflection in a wedge shaped piece of clear plastic. It is fed by the same LCD video projectors that drive rear-projection televisions. The technique promises to cost about a fiftieth of the price of current plasma screens and yet deliver a similar quality picture.

The system works by introducing light at the bottom edge of the wedge, which bounces across and back again up the length of the wedge until it reaches the critical angle at which it escapes and leaves the face of the screen as light. A precise mathematical formula ensures that light for the correct pixel exits the screen at just the right distance up the wedge. While still basically a super-compact LCD rear projection system, it allows superthin TVs to be made by folding the wedge in on itself to allow the light to be bounced within a smaller confined area.

Additional expansive uses of the technology are already being thought of by the Cambridge team:

Rollable displays - using narrow wavelength (laser) illumination allows the Wedge® display to be very thin, which could ultimately allow it to be rolled up. The use of a graded index film would prevent the interface from being scratched.

Multiple image displays - two or more projectors can be pointed into the Wedge® panel and the images channelled to different parts of the room or eye by using polarised light and polarising spectacles. Also by using two directionally selective Wedge® screens back to back, in conjunction with two projectors, the panel could be made to show a different image on one side to the other. This would be useful in, for example, a point-of-sale advertising screen hanging from the ceiling of a supermarket.

Sensing displays - Wedge® optics could be used in the reverse direction in conjunction with a sensor array (such as the CCD arrays used in digital cameras), for example to recognise fingers touching the display or even to recognise gestures. In order to simultaneously project an image in the forward direction without the projection source blinding the sensor, laser illumination could be employed in combination with filters which prevent the laser wavelengths from reaching the sensor.

Window displays - using a rollable diffuser film as a window blind would allow the Wedge® display to appear like a window when not in use. This could be used in boardroom applications. Another way to do this would be to combine the Wedge® panel with either a switchable liquid crystal diffuser, or a holographic diffuser and a switchably opaque background.