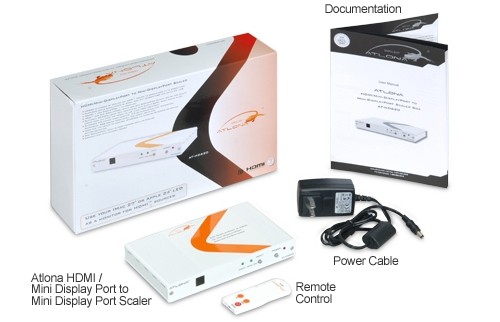 Atlona Technologies today announced that the company is now shipping its AT-HD620 HDMI to Mini DisplayPort converter, which is capable of up-converting video signals to dual-link resolutions up to 2560x1440. For HDMI users, the unit solves compatibility issues with Mini DisplayPort displays, such as Apple iMac 27-inch or 24-inch monitors, by scaling any HDMI input to match their native resolution.

"The AT-HD620 caused quite a stir when it was first unveiled, and we are very excited to say that it is now available to our discerning customers. The AT-HD620 fills a gap in multiple applications, from boardrooms to video editing. Until now, a product designed to allow HDMI users to utilize the full dual-link resolution capabilities of Mini DisplayPort displays had been missing. We are happy to provide it."

The AT-HD620 features an HDCP-compliant HDMI input, in addition to a Mini DisplayPort input that functions as a pass-through for Mini DisplayPort sources. The unit allows users to switch between the two inputs, enabling them to use both a connected Mini DisplayPort computer such as a MacBook Pro, Mac Pro, or Mac mini, as well as an HDMI source such as a PlayStation PS3, Apple TV, or Xbox 360.

The converter scales any resolution, including 1080p, to dual-link resolutions up to 2560x1440. Support for 3D motion video adaptive deinterlacing allows for the best possible image, while providing less than a single frame delay.

About Atlona Technologies
Atlona Technologies is a global manufacturer of cutting-edge digital connectivity solutions. The company supplies an extensive range of high-quality products — from cables, splitters, and extenders to distribution amplifiers, converters, switchers, and much more — to a diverse client base spanning the consumer electronics, home theater, computing, retail, systems integration, professional A/V, broadcast, entertainment, medical digital imaging, and digital signage markets. Made from the finest materials and offering unique feature sets, the company's value-added products can be found in places such as the most prominent hotels in Dubai; NASA's Ames Research Center in Mountain View, Calif.; and across hundreds of thousands of home theaters across the globe. More information about Atlona Technologies is available at www.atlona.com.

Read the Complete Thread
victors posts on December 24, 2010 20:18
Atlona just released the DP300 for those who want to save money and don't need the MDP switching.

I got one and I can say first hand, it makes the PS3 look crazy sharp on a 24" Cinema display.
Post Reply