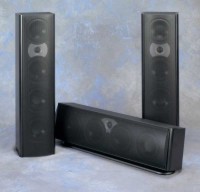 Atlantic Technology has introduced two new loudspeaker models that are sonically and visually optimized for use with the latest generation of flat screen video displays. The Model FS-3200LR and FS-3200C are high-performance, low-depth two-way systems that feature multiple innovative options for mounting either on-wall, or as striking freestanding models. 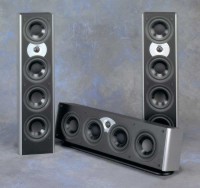 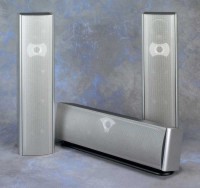 The Atlantic Technology Model 3200 speakers include a pair of adjustable rear panel controls developed for the company's high-end C.O.R.E. technology speaker systems. These allow the speakers to be sonically tailored for a wide variety of room acoustics, listener preferences, and mounting configurations. They can be combined with any of Atlantic's highly regarded subwoofers, and surround speakers such as the company's TriMode ICTS ceiling surround speakers or freestanding system 4200 SR dipole/bipole surrounds to create a stunning and immersive home theater system.

Each Atlantic Technology FS-3200LR speaker employs two GLH (Graphite Loaded Homopolymer) 4 -inch (115mm) woofers and an advanced 1-inch (25mm) Ferrofluid-cooled, damped soft dome tweeter with a powerful neodymium magnet. A pair of 4 -inch GLH Bass Pressure Drivers work with the woofers for full-bodied sound down to 80Hz. The active drivers are mounted as an MTM array, providing for excellent off-axis response and linearity. The cabinets are composed of acoustically inert, heavily braced MDF, and are magnetically shielded so they may be placed close to any type of video monitor without degrading video performance.

The FS-3200LR can be mounted directly to a wall using built-in keyholes, or with a choice of two included wall-mount brackets. A straight bracket is used when it is desirable to point the speaker directly ahead, and an angle bracket is also included that toes the speaker in toward the listening position ten degrees. An optional floor stand is also available that converts the speaker to a sleek, free-standing column speaker-perfect for use alongside one of the new DLP or LCD rear projection TV's.

The FS-3200C employs the same driver complement as the LR speakers, but in a horizontal arrangement that features a raised tweeter to minimize the off-axis nonlinearities that plague most horizontal center speakers. It can be mounted directly to the wall with keyhole mounts, and also includes a choice of either a straight bracket for mounting perpendicular to the wall, or angle bracket that aims the speaker slightly up (when mounted below the display), or down (when mounted above the display). Lastly, the center channel also includes Atlantic Technology's exclusive rocker base, which allows the speaker to be mounted on a shelf or on the video display itself, and tilted toward the listening area at any angle needed.

Both the FS-3200LR and C speakers include a pair of rear panel controls that allow their sonic character to be tailored to the listening environment, mounting location, and listener preference.

The three-way HF Energy control adjusts the tweeter's output in order to compensate for varying room acoustics. The Boundary Compensation adjustment can be engaged to adjust the lower frequency output to compensate for the typical sound colorations caused by placing the speaker very close to a large surface, such as a TV screen, a wall, or on a shelf in an entertainment unit.

For more information on Atlantic Technology and its many fine products for home theater and custom audio/video installation, visit www.atlantictechnology.com or call 781-762-6300.