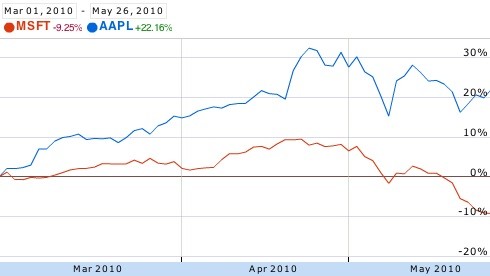 Something happened yesterday. Something big. And yet it remained largely unreported in the traditional news outlets, but tech sites everywhere perked up. The big news was that Apple had finally overtaken Microsoft in terms of market capitalization. Market capitalization is simply a public company's value measured as their share price x number of shares. It's a simple formula that more or less tells you the value of the company. For a company that almost closed its doors during the 90's this is an incredible testimony to the leadership of Steve Jobs and the new board at Apple.

Yesterday, Apple's shares rose as much 2.8 percent on the Nasdaq. When Microsoft's shares dropped a bit, the result was Apple's market value rose above $229 billion, pushing it into the lead behind only Exxon Mobile Corporation. Here's a snapshot of the three largest company's market caps as of this quarter:

To give you an idea of the incredible growth of this company, largely due to the iPod and iPhone and Apple's commitment to be a value and leader in the laptop segment, shares of Apple are worth more than 10 times what they were a decade ago. Apple hasn't had a higher market value than Microsoft since 1989. Just for reference, that predates both Windows 3.1 and Mac System 7 (remember back that far?) Color monitors weren't in most users homes and if you had a Mac it was likely a Macintosh II or Macintosh Plus.

In 1997, Apple took a $150 million investment from Microsoft in order to stay solvent. back then, Microsoft was over 5x larger than the ailing Apple.

So what's going on? Analysts are all over this, and it seems that it's a referendum on the importance of innovation. Apple has it, Microsoft doesn't. It's not that Microsoft doesn't innovate at all, but it does so on a much smaller scale. Rather, much of its efforts seem focused on playing catch-up - many times to Apple. Think about the recently dropped tablet Microsoft had been working on to compete with the iPad, or the stumbled Zune media player, or even the history of Windows playing catch-up to feature Apple released in its Mac OS. It seems clear that the corporate ethos surround Microsoft stifles creativity and indeed is more reflective of a giant ship with a tiny rudder. It takes a long time to change directions and those more maneuverable ships, though often smaller, are able to quickly turn as needed to pursue greatness.

Conversely, the downside is that Steve Jobs appears to be the rudder that steers Apple quickly. When he eventually gives up the reigns it will be interesting to see if the company can continue in its present role as a quick, thinking, visionary-led corporate anomaly. One thing is for sure, no one saw this coming 20 years ago.

skizzerflake, post: 722053
I think it's vertical integration…they are a long way from a monopoly on anything.

Fair enough: though “product” is so… flexable in terms of “monopoly”.

Certainly I cannot start a company that makes iPhones, nor a device that runs iPhone apps, nor can I sell iPhone apps without apple getting a cut. iTunes itself exerted signifigant control over the digital audio market until relatively recently.

Certainly, to me, the fact that in order to use one thing from Apple *say an iPhone“, I will be limited to one carrier, and one plan, and one source of software, and expandability, etc has all the things I dislike about monopolies: but I think it's more philisopical than germaine to the discussion: so ”integration" it is
skizzerflake posts on May 31, 2010 23:16

As an interesting aside: Microsoft owns a signifigant stake in Apple… and so has made a few billion off Apple's rise.

I think it's vertical integration…they are a long way from a monopoly on anything.
JerryLove posts on May 31, 2010 12:03

skizzerflake, post: 721870
Apple has had an excellent strategy. They're only a small part of the desktop market but they control both the hardware and the OS software.

They call it a “vertical monopoly”.

As an interesting aside: Microsoft owns a signifigant stake in Apple… and so has made a few billion off Apple's rise.
skizzerflake posts on May 31, 2010 10:17
Apple has had an excellent strategy. They're only a small part of the desktop market but they control both the hardware and the OS software. Having their IPods being such a big thing and with the IPhone as the most talked about smartphone allowed them to grow. Unlike MS, which mainly does software, Apple micro-controls their gadgets from top to bottom. The best example of this is the IPhone (and IPod Touch), where you have at least 10 times as many apps as the runner up phones and where every single app that is sold comes from the App Store and gives Apple a piece of the action. The IPad is following the same pattern. I'm not an Apple zealot at all, but I have to admit that I'd be lost without my IPhone. I have forgiven Jobs for his paternalistic approach to selling and fortunately, I'm not interested in phone-porn or extreme phone violence, which are banned by Steve. Mainly what I like is that everything works, is simple, is incredibly convenient and is right in my pocket. It's refreshing to have a product that really works.
haraldo posts on May 31, 2010 07:06

lsiberian, post: 721502
The iPhone is an example of good engineering. I can't believe how awesome it is.

What software can't you load to the iPhone that would be compatible with it anyway?

Can you make phone calls with it too?
For me the first version of the iPhone looked like a joke… a phone that didn't even support MMS, somehing that's been on all phones for years….

Now Nokia gone completely another way with a customized Linux distro on their N900, wonder what gives you most freedom of choice and what's most open?
Post Reply