The Promptu remote is designed to replace a conventional remote control and includes a "Talk" button and a built-in microphone, together with an infra-red receiver used in conjunction with an existing cable box.

The remote control translates spoken commands into speech features that are sent the receiver and then to a small runtime application in the set-top box. The actual voice recognition is performed at the cable head-end on commodity PC based Linux systems. This can be tuned to regional accents and can include a large vocabulary database. The response is returned in around a second, and an on screen prompt indicates when the command has been understood.

The remote control can be told to change channel by name or number, or show programme selections by up to 75 pre-defined categories. This perhaps demonstrates the problem of genre classification for television programmes and displays a certain North American bias. So there are currently categories for Cheerleading and Rodeo, but only one for Performing Arts, which might indicate something about the intended market.

It comes with a handy reference card that helpfully explains "You can also find an actor in an Adult program by saying 'Find Adult Actor' and the actor's name".

Voice control always seems to be a feature of visions of the future. While not dismissing its potential application for ensuring accessibility, the Promptu approach still requires a remote control and the user needs to hold down the Talk button when giving commands. However, the real advantage is that it may eliminate the requirement for keyboard entry when searching for titles, or adult actors. 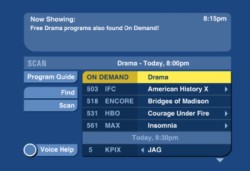 Promptu is currently on trial by Comcast and Time Warner in the Philadelphia region. Comcast chief executive Brian Roberts has been quoted as calling it "one of my favorite new pieces of technology".