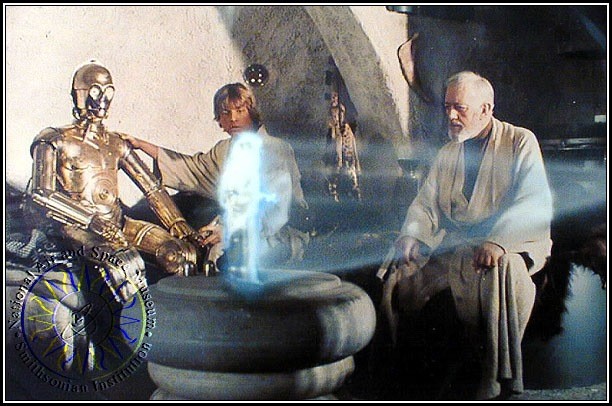 "Help me Obi Wan Kenobi, you're my only hope!" Now, after 30 years of geek-longing for honest-to-goodness holograms, US researchers have unveiled holographic technology to send and receive actual full-motion 3D images. Scientists at the University of Arizona (it's always colleges that come up with this stuff) say their prototype “holographic three-dimensional telepresence” (stupid name) is "the world's first practical 3D transmission system that works without requiring viewers to wear special glasses or other devices."

The new research was just published in the journal Nature. Of course, nobody is thinking about home telephony applications. After all, it's been over 70 years since the invention of the videophone and we just now got FaceTime from Apple computer, which is hardly ubiquitous. Instead, the first likely applications of the new technology will probably be in the areas of telemedicine and teleconferencing to mass entertainment. We think it should be built into TVs so that you can hologram your friends into your living room - I mean, come on, we've been waiting for over 30 years!

"Holographic telepresence means we can record a three-dimensional image in one location and show it in another location, in real-time, anywhere in the world."

Right now, 3D technology in the form of holograms is limited to static 3D images that can't move, or 3D images projected onto 2D surfaces that usually require the use of glasses. Anything that has involved motion and 3D has been extremely low resolution and entirely impractical. The new technology allows for motion and the impression of a physical presence for the images being projected. It's based on a new “photographic” polymer developed by the California division of Japanese electronic materials company Nitto Denko.

The way the holographic technology works (and they REALLY need to find a beter name than "holographic three-dimensional telepresence" is that a 3D image is recorded with several cameras, so that multiple angles are captured. That info is then recorded and played back by a fast-pulsed laser beam that can play back the image as holographic pixels in the photographic polymer. They are calling the holographic pixels “hogels” - which makes sense. The image is created by the optical interference pattern created between the two laser beams. Right now it's monochrome and only 10-inches in size. It also only updates every 2 seconds, but you can imagine that once the technique is devloped it's just a matter of time before they figure out how to speed it up. Couple that with better laser and computing technology and the odds go up even faster.

Professor Peyghambarian believes they are looking at 7 to 10 years work before a consumer version of the system will be ready for testing. This is something that I think definitely represents the future. Now all we need to do is get cracking on those flying cars!

Read the Complete Thread
gmichael posts on July 31, 2012 08:58
I'm actually surprised that it's taken so long. It was back in 1989 the first time I saw a room dedicated to holograms. It was set up so that two people could play handball without a court or ball. It may have been a far cry from a holodeck, but it was 23 years ago.
It's good to see that someone is moving forward with it.
Adam posts on July 31, 2012 08:44
Cool. I was on hiatus when this article came out, so I didn't see it until this morning. Pretty neat. Instead of 7-10 years, now it's just 5-8 years…until George Lucas can remake Star Wars again. Giggity.
BoredSysAdmin posts on July 31, 2012 08:35

Sandra498, post: 897834
Remember there is nothing new under the sun, except us….they will find a way and some.

True 3-D can only be achieved holographically and not thru cheesy glasses/display screens that winks at us causing eye strain. I hope research keeps going in the holographic avenue.
Sandra498 posts on July 30, 2012 19:22
Remember there is nothing new under the sun, except us….they will find a way and some.
Post Reply