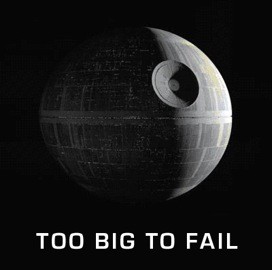 BDXL - Too big to fail

On Friday the Blu-ray Disc Association (BDA) announced the finalization and release of the specifications for BDXL, the new multi-layer recordable Blu-ray Disc format with up to 128GB of capacity. Rather than a new movie format, it is targeting commercial segments such as broadcasting, medical and document imaging enterprises with significant archival needs. BDXL will be offered as write-once and rewritable 100GB (triple-layer) discs, and write-once 128GB (quadruple-layer) discs.

On the consumer side, applications include the capture and playback of HD broadcast and satellite programming. That's only really applicable, however, in markets (like Asia) where set-top recorders are more common.

Of course it's completely incompatible with existing players. That's right, the new BDXL specification is going to require new hardware to play back or record BDXL media. Earlier this year Sharp Corp developed a blue-violet semiconductor laser for Blu-ray Disc (BD) recorders whose optical output is as high as 500mW under pulsed operation. It has an oscillation wavelength of 405nm and a capability of writing at 8x speed on triple- and quadruple-layer Blu-ray discs. The company already started volume production of a blue-violet semiconductor laser with a 320mW pulsed output about a year ago.

The only saving grace is that, since the new media specifications are extensions of current Blu-ray Disc technologies, future BDXL capable recorders can at least be designed to play back existing 25GB and 50GB Blu-ray Disc formats.

What strikes us as odd is the reason for designing an optical or disc-based archival system at all. I mean, why not simply wait for solid state storage to increase and eliminate the need for fragile and unreliable (in our opinion) optical-based storage. With capacities at just 128GB, BDXL is hardly a boon for archival and in fact is trumped dramatically by existing hard drive storage solutions (even on a cost-per-gigabyte level). That leaves only space - and solid state is sure to trump that, including cost, within the next several years.

The completion and approval of the specification allows manufacturers to obtain licensing information and license applications needed to begin production of the high capacity write-once and rewritable discs and hardware.

We'd call this a non-starter, though we're sure there will be some hardware support. With how delicate we've seen optical media be in the past, there's no way I'd want to trust 128GB of critical info to am optical storage device anytime soon. As for home consumers, shaking up the current "standard" with a new format this early in the game also seems counter-productive, even for Asian and other markets that seem to jump all over new technology faster than we get it in the west.

Read the Complete Thread
Ponzio posts on October 30, 2013 10:24
This is why I keep 3 2TB 7200 HD's as my backups using SyncBackFree software daily/hourly and pray. Knock on wood none have failed in 4 years and when one of them does … as it surely will … I'll replace it/them. They may not be the most reliable but with the cost of storage at an all time low for standard HD's … you can pickup a Fantom 2TB USB3 unit anywhere from $99, on sale, to $139 … it seems to me to be the cost effective solution.
Cyberstorm posts on October 29, 2013 17:16
Long Term Archival

With regards to long term storage, there have been several technologies, though only a few remain.

Kodak produced their 74min 650MB Gold plated discs in the 1995-2000's or so, and were the single best disc for long term storage (as far as I know - no source - might be incorrect) – up to 200 years in accelerated tests.
Kodak also produced 80min 700MB Silver+Gold plated discs in 1998-2003 or so, and were also very good for long term storage, claimed to last up to 100 years in accelerated tests.

I still have quite a few of both types (burned in 1996, and 1998 up to 2005 when DVD's took over), that still works flawlessly - even though quite a few other brands of cd's and dvd's have failed miserably.

VHS tapes, Casette Tapes, DAT Tapes, Floppies and Harddiscs of various types (IDE, ATA, and SCSI) most likely have failed at least some bits (even though they may seem to read correctly - Bit rot is most likely present in every type).

With Harddiscs in particular, I have seen so many fail, that I tend to buy new ones every 2-3 years, BEFORE they have a chance to fail - this is just about every brand - Seagate, IBM, Maxtor, Connor, Western Digital, Hitachi, … well name one, and it will most likely fail within 2-5 years if used often enough — though proper cooling (much more that the producers claim is necessary) – can prolong the lifespan.

Recently when researching long-term storage, I stumbled upon a “new” format — Milleniata … a Disc format designed from the start to last 1000 years - based on Stone inside the disc, instead of dyes. Go watch Milleniata's Promotional video's they give a nice overview. At first they produced 4.7GB DVD-R's and have now begun manufacturing 25GB BD-R's. It requires a very high powered laser to burn the stone-layer in the disc, and the burner itself have to be "M-DISC“ certified — though,

I have read that some recorders can be firmware upgraded to be able to cope with M-DISC's (at probably a lot lower write speed than their normally stated max, as the M-DISC requires very high powered laser (same goes for higher speed - thus if you lower speed, you MIGHT be able to burn M-DISC's - with the right firmware)

Finally - if you really want to preserve ”stuff" - implementing a Parity area – like e.g. Nero's SecurDisc implementation, or simply PAR2 - or another kind of Parity writing software and md5 sums to ensure that the data really IS intact, is some of the way to ensuring proper long term archival of data.

And yes, DNA is quite resilient, with many safeguards against mutations - Mutations still do occur — but at least in data preservation with parity sets and md5 sums one will be able to detect it at the very least.
BoredSysAdmin posts on January 29, 2013 18:01
The key words are large capacity and second I forgot to mention - digital
How are going to print out a movie, music or human voice? Old school film and Vinyl Record both terrible at preservation

Who knows , maybe they will develop some sort of cheap large capacity solid storage which will be suitable for archiving (and we haven't even touch digital formats issues)
slipperybidness posts on January 29, 2013 17:47
Printed works seem to have lasted for several hundred years, immune to EMP, etc. Just bulky
BoredSysAdmin posts on January 29, 2013 16:38
I agree with Clint analysis - this as dead as MO media and drives there
Is there large capacity good archival format exists? I don't know really…
Isn't DNA storage is still in very, very early research stage and nothing much could be said about it.

PS: SD isn't type of of storage, but more of interface. SD uses flash memory, but much simpler and cheaper kind than any SSD.
Technically no one prevents to make high quality SD based storage, just no one in their right mind would buy it
Post Reply