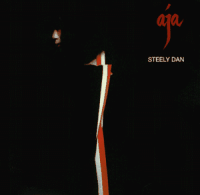 Steely Dan's Aja represented a defining moment in my young musical development; being a jazz-lover and serious student of music (drums/percussion), I had never imagined that a Rock-and-Roll album could sound like this. Of course, with its predecessor The Royal Scam and a literal "who's who" of the era's finest studio musician's, you could almost see it coming. By the late 1970's, Donald Fagen, Walter Becker, and producer Gary Katz had mastered the multi-track analog recording medium. Ironically, it took Becker and Fagen over 20 years to finally win a Grammy (for Two Against Nature), having added the duties of producer to their many talents and adapting to the digital world. Nearly every track on this disc features a memorable line or performance that, even years later, represents the "Steely Dan sound".

The only Steely Dan tune to later be covered by a rapper, this track features memorable solo performances by the late, great Victor Feldman (fender rhodes) and a young Tom Scott (tenor sax). It's also worth noting that Tom Scott wrote ALL of the horn arrangements on Aja , the first time his unique phrasing and styling were heard outside of his solo releases. Trivia fact: drummer Paul Humphrey made his mark on the old TV show "Name That Tune".

The title track is part jazz and part rock structured almost like a three part symphony; musically speaking, it has a head and chorus, but what would be the bridge features some of the most virtuoso free-form Tenor Sax (Wayne Shorter of Weather Report fame) and Drum (all-time great session drummer Steve Gadd) solos ever recorded. In fact, I remember studying the transcribed Steve Gadd drum solo for weeks on end; this was one of those performances you "learn" how to play your instrument from. Trivia fact: if you listen carefully, you can hear Timothy B. Schmit's (of Eagles fame) high backing vocals in support of Donald Fagen.

This track became an instant classic for both its lyrics and solo tenor sax performance by Pete Christlieb. In fact, you can still find this big band jazz arrangement in the performance books of many high-school and college jazz bands. This was the lone track featuring Walter Becker on bass, quite a departure from the band's early days where he was the featured bassist. Trivia fact: remember those screaming sax solos you used to hear from the Tonight Show band coming out of commercial breaks? That was none other than Pete Christlieb.

This track was one of the two "hits" (along with Josie) from Aja. It's been described as one of the most densely layered Top 40 recordings ever, again featuring a famous guitar solo in what is essentially a 13 bar Blues. It also featured a very memorable Michael McDonald falsetto refrain, coinciding with his emergence as a driving force (and Grammy winner) with the Doobie Brothers. Trivia fact: guitar soloist Jay Graydon (another Grammy winner) later went on to write and produce for such notable performers as Al Jarreau, George Benson, and Earth, Wind & Fire.

A clever re-telling of Homer's Odyssey (Fagen was actually an English major in college), this track is best known for Bernard "Pretty" Purdie's driving beat that became an instant classic among drummers (if you can lay down the Home At Last groove, you can play drums!). Purdie, who also played on Deacon Blues, was nearing the end of a career as a first-call studio musician that began in the 50's and included some of the most famous R & B hits of the 60's. It is also the only track on this release to feature solos by both Donald Fagen and Walter Becker. Trivia fact: careful listening will once again reveal Timothy B. Schmit's perfect backing harmonies.

While arguably the weakest track on the release, it never-the-less features a solid groove and steller background vocals by the now instantly recognizable Michael McDonald.

The other big hit off the release, this track is considered by some to be a rock classic. It combines typically cynical lyrics with outstanding guitar solos over yet another unique drum groove provided by Jim Keltner, another first-call session drummer from the 60's & 70's (who played with members of Cream and the Beatles to name a few). While the steady Chuck Rainey played bass on nearly every track, Aja features 6 different drummers on 7 tracks, unique even by today's standards.

Over the years, I've used both the LP and CD versions of this Original Master Recording to evaluate nearly every element of the audio chain; the other such reference recording I've used is John Klemmer's Touch (see review elsewhere on this site). A testament to the fine work at Mobile Fidelity Sound Labs, these releases represent the finest examples of their respective generations: analog (LP) and digital (CD). In fact, these are the oldest (dated) CD recordings I own (with only a handful even close), and still sound as good or better than many newer digitally mixed and mastered CD's. I use Aja to analyze the audio chain's ability to accurately reproduce dialog/vocals, including some tightly spaced vocal harmonies. Of course, it also represents some of the finest percussion (especially snare drum and hi-hat) recording techniques at the time, which are often some of the hardest sounds to accurately reproduce.

Aja is one of those uniquely rich musical experiences that crosses the boundaries of rock/pop/jazz/whatever. Even better were the extensive liner notes and, for the first time, detailed musician listings for each track so you didn't have to guess which famous musician was playing on which track. For those of you wanting a more in-depth look at the studio scene of the late 1970's (and the making of this album in particular), I encourage you to checkout the DVD from Columbia's "Classic Albums" series on Aja . In addition, if you really enjoy the recording engineering work, you should checkout their top 10 single FM (from the movie soundtrack of the same name), which was recorded around the same time and features the playing of both Becker and Fagen along with the late, great Jeff Porcaro on drums (of Toto fame) and a classic Pete Christlieb sax performance. If you want to experience the finest of what the original 2 channel stereo CD format can offer, you can still find the UDCD version of Aja second-hand in used CD stores or online (like eBay).