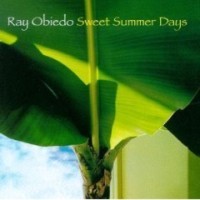 While all six of Ray Obiedo's CD's are quite good, I'd have to say this one was the "sweetest". If I had to rank them, I would place Sweet Summer Days a very close second to his debut release: Perfect Crime. In addition, this CD contains one of the best (original) vocal tunes I have ever heard on a jazz release: Sweet Summer Days (the title cut), featuring Peabo Bryson.

Ray Obiedo's gifted musical talents are equally matched by his recording production expertise. You know there has to be a lot of overdubs when the same guy plays the keyboard and guitar parts, and the quality never waivers. The CD opens with one of my favorite tracks: Casserra. I guess I should get out of the way that my other favorite is the slow groove of Current State, with an excellent sax solo by Marc Russo (of Yellowjackets fame). That's not to say there's not plenty more good music on this release; in fact, there aren't any songs I really don't like (or can't listen to). Blue Catcus has a nice (and rare) trombone solo. Not only does the title cut "break the mold" for my general dislike of vocal tunes on jazz CD's, it's actually one of my favorite tracks; while it received airplay on some soul/jazz stations, it never made it onto the pop charts. Both Cha La Island and Juliet are nicely done slow grooves (nice for relaxing). There's something about the bass line on Macondo I just love, and the guitar melody is haunting. The final three tracks round out a nice set, with the final cut (One Wish) being my least favorite on the CD.

With this release, I assumed Ray Obiedo was heading into the middle of what would be a long and successful recording career. Alas, he would only release one more CD (the very good Modern World) before falling into relative musical obscurity. I continue to wish that we'll see something new from him, and can only hope that he'll pick-up where he left off (musically speaking) in a few years.