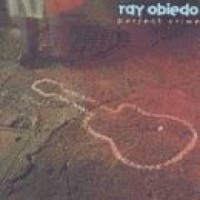 Ray Obiedo's excellent debut release was followed by five more over the next 10 years, after which he seemingly disappeared from the music scene. While the decline in jazz recording artist contracts is largely to blame, I had always thought that such a dynamic talent would continue recording and releasing music own his own (as so many now do via the Internet), but unfortunately you can't even find a website for him. In addition to his writing and producing talents, Ray Obiedo plays both guitars and keyboards on every track; and if that wasn't enough, he also does the horn arrangements!

Audio quality is excellent throughout, as nearly all Windham Hill jazz releases were digitally mixed and mastered by this time. My two favorite tracks make bookends of this CD: Short Stories (which received radio airplay at the time), and the title track Perfect Crime. The title track features one of the best horn arrangements on the CD. Blue Kiss features a haunting flute melody and wonderful guitar solo; One Look, One Smile also features a nice melody and wonderful steel drum solo from none other than the steel drum master, Andy Narell (who also co-produced the CD). No Fiesta is probably the only track I really don't like, but it's short and sweet. Marc Russo (of Yellowjackets fame) lends his instantly recognizable alto saxophone sound to both Sienna and Criss Cross, demonstrating why he was so in demand in the late 1980's and early 1990's. All in all, a very strong set.

At the time of this debut release, Ray Obiedo was one of the freshest talents out there, and some would even trace his style (along with artists like Acoustic Alchemy) to the beginnings of what we now call smooth jazz. I still listen to nearly all of Ray Obiedo's CD's in their entirety as they are remarkably consistent both in their style and high production quality.