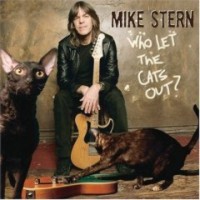 Guitarist/composer Mike Stern has had a recent string of strong releases with Grammy nominations, and this one is no exception. In fact, Who Let The Cats Out? could finally land him a much deserved win in the category of "Best Contemporary Jazz Album" for 2006 as it's got some of the intangibles that voters often look for: unusual instrumentation, compositions just a bit on the "outside" (as they say), and a strong line-up of both new and established musicians. This CD is appropriately named considering some of the "cats" that grace it: Dave Weckl (drums), Jim Beard (keyboards/producer), Anthony Jackson (bass), Richard Bona (bass), Victor Wooten (bass), Bob Franceschini (sax), along with newcomers Kim Thompson (drums) and Meshell Ndegeocello (bass). A few of these "cats" also tour with Mike Stern, and he's said that Kim Thompson--one of the best female drummers I've heard in years--may be a future addition.

There's a ton of great music on this CD: over 70 minutes' worth of jazz/rock fusion, straight-ahead jazz, and ballads. The opening track alternates between a funky groove on the head and straight-ahead swing for the solos. Any long-time Mike Stern fan will instantly recognize the trademark doubled guitar/sax sound. It's almost redundant to say "great guitar solo" on a Mike Stern CD, so I'll say it once and let you repeat it for every tune: SCREAMING guitar solo. KT is named for drummer Kim Thompson and features an interesting laid-back groove, but trumpeter Roy Hargrove really steals the show on this one. He alternates between a muted and open trumpet, climaxing with a soaring solo. Good Question is a drum showcase with an amazing scat solo from bassist Richard Bona. Language is another hard-driving tune that you'll find yourself singing (Richard Bona style!). We're With You is one of two ballads (the other being All You Need ) on the CD that both feature interesting instrumentation (harmonica or vocals) and memorable melodies; you'll once again find yourself humming along with All You Need . We're With You is unique in that Mike Stern puts down his trademark electric guitar for a nylon acoustic one, and you'd never believe the guy hardly ever plays it. Leni Goes Shopping was written for Stern's wife (a guitarist/vocalist in her own right), and is a basic straight-ahead swing romp. Two of my favorite tracks on the CD come one right after the other: Roll With It and Texas . Roll With It features the funkiest drum groove on the CD along with special guest Bob Malach on saxophone (you can find him on many old Mike Stern CD's). Similarly, Texas features the most laid-back drum groove on the CD along with some haunting harmonica work. I guess I'm just partial to the feel having lived in the Lone Star state for over 20 years. The title track alternates between a rock groove on the head and straight-ahead swing for the solos; plus, it's the only other track featuring outstanding trumpet work by Roy Hargrove. I can remember when I took a History of Jazz class back in college, and we were assigned certain historical pieces of music to study for certain reasons. I think that someday, when teaching a rhythm section how to lay down a groove, someone will put on the track Blue Runway , and say "this is how you do it"! Forgetting about the fantastic individual talents of Dave Weckl and Anthony Jackson, you can hear (and feel) what comes from over 20 years of musical collaboration. I guess it's no surprise that this track went straight to my all-time favorites list for Mike Stern.

As you can see, there isn't a single weak tune on this CD. It landed (and has stayed) on my iPod in its entirety since it's release. If you enjoy this CD, you might also want to checkout Mike Stern's recent concert DVD (simply titled Paris Concert ); the touring band uses essentially the same personnel with one exception: the great Dennis Chambers (a long-time Mike Stern sideman) appears on drums. Finally, the liner notes are extensive-including photos--rating this CD an "outstanding" in all categories. For all the great jazz artists who have been dropped from the dwindling rosters of the record companies, I'm glad that someone like Mike Stern continues to thrive. He's been making CD's for over 20 years now, and I can only hope he's got another 20 years' worth in him!