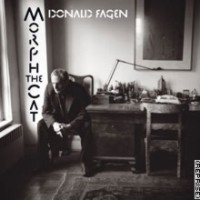 It's finally here: another Steely…err…Donald Fagen CD! This once-per-decade phenomenon (Fagen's third solo release since 1982) has been highly anticipated by Steely Dan fans everywhere, and I'm happy to say it was worth the wait. In fact, the Steely Dan ties are so strong, you'll find many of the same musicians (minus Walter Becker) that played on Steely Dan's last release ( Everything Must Go ). Present are the usual double entendres and cynical wit; in this case, the overarching subject matter is basically death. Fagen, now in his late 50's, claims this release completes a trilogy that began with The Nightfly . Sadly, I get the sense that this may be his final solo release; at the same time, if you view his releases as "bonus Steely Dan tracks", maybe that's enough to keep you going until the next one.

Here comes the H Gang: I would play in that band for free! More than any other track, this one reminds me of OLD Steely Dan (circa late 1970's): the chord progression, the background vocal arrangement, the guitar solo. This is probably my favorite track on the CD, and a great choice for the lead single.

This is another one of my favorite tracks. I like the simple refrain and love the piano sound: kind of a "dirty" Fender Rhodes (inspired by Ray Charles). It has a laid-back, steady rock 'n roll groove.

This is a very hip tale based on a famous W.C. Fields saying (death is "The Fellow In The Bright Nightgown" ). It's hard to believe the falsetto is Donald Fagen doubling himself on vocals: I'm impressed! Nice horn arrangement over a groove that practically swings.

5) The Great Pagoda of Funn

This is basically a love story with a couple of nice solos. Veteran Marvin Stamm's muted trumpet solo should become a classic.

The combination of an open ride cymbal and tambourine gives this track a throw-back rock-n-roll sound. This is an unusual account of going through airport security like only Fagen can tell. Yet another nice vocal arrangement.

7) The Night Belongs To Mona

This is probably my least favorite tune on the CD, but not so bad I can't listen to it.

This track has double-entendre written all over it; even the chord changes sound mysterious. This is another favorite because I really like the groove.

We've heard this somewhere before…

I would be shocked if the audio quality on this CD wasn't top-notch, and it definitely lives up to the expectations. Essentially the same production crew won a Grammy in 2000 for "Best Engineered Album/Non-Classical" for Two Against Nature . As expected, the band features an outstanding mix of hot newcomers and talented veterans of the recording industry.

While I highly recommend this CD, I'm going to give it an overall rating of 4.5 (out of 5) for one reason: I miss the variety of bands/musicians/soloists that we used to see on Donald Fagen (and Steely Dan) releases. For example, while Keith Carlock is obviously an excellent drummer, I think that "mixing it up" a bit with other drummers would add even more variety to the grooves. Being a drummer may make me more sensitive to that particular element, but I would also enjoy hearing other great soloists besides the one or two featured. Unlike some of the iconic rock bands, most don't identify Donald Fagen's (and Walter Becker's) music so much by the musicians as by the music. For any other artist, this would be nit-picking, but I think the standards these guys have established over the last 30 years are extremely high. Having said all that, I think this CD is stronger than the last Steely Dan release ( Everything Must Go ) and MUCH stronger than the last Donald Fagen solo release ( Kamakiriad ). If you just can't get enough, check-out a streaming audio interview with Fagen (including links to some Steely Dan interviews) on NPR's World Café.