The Truth About In-Wall Speakers 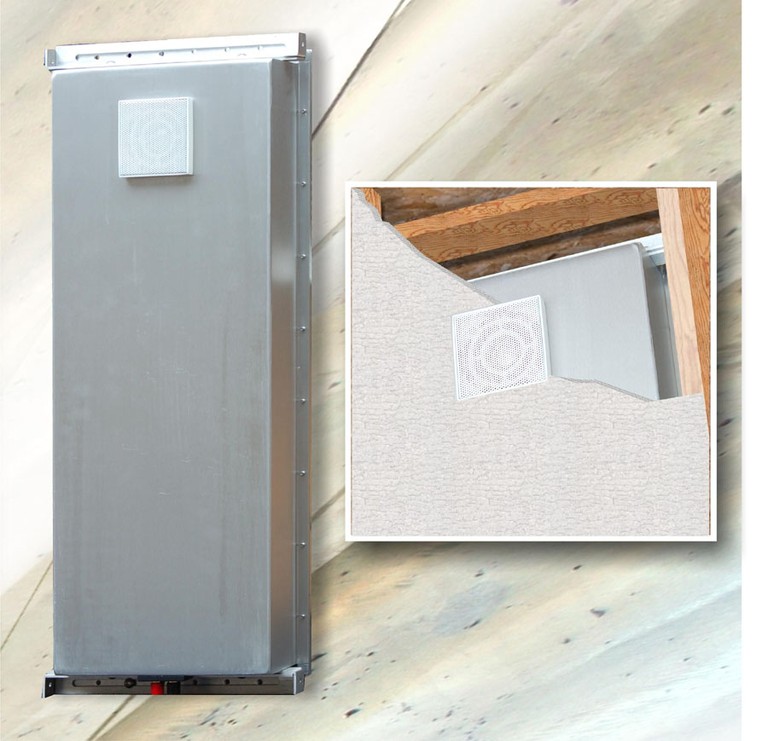 Going back thirty-five years, I labored as a custom/high-end AV salesman in the Chicago market. We had an upscale clientele on the affluent North Shore, and their homes were usually opulent and stylish. Quite often, my clients would pass on having sound in a room because speakers would have been visually intrusive. We had no good-sounding custom speaker options available to us at the time, so we started spec’ing a/d/s 300i and 400i automotive speakers into homes, and installing them into walls, sometimes with subwoofers. These models were “plate” speakers; open-back, with audiophile woofers, tweeters, and crossovers. When then-a/d/s President Godehard Guenther asked us for some pictures of our high-end autosound installations, we sheepishly explained to him that we were installing them into the interior walls of houses far more often than into cars. We even convinced him to change the design so the speakers would flush-mount into walls rather than protrude an inch, as they originally did. We found that there were many situations where good sound was desired, but the speakers had to be architecturally installed. Having in-wall options helped both us and our clients. The same is true today, only with many more and far better in-wall options.

The majority of in-wall and in-ceiling speakers were designed to bring sound into a room without being visibly intrusive. These typically-inexpensive speakers rarely have an enclosure, and quite a few laws of physics are ignored, as well as almost all the Thiele-Small Parameters. (Thiele-Small is a set of electromechanical parameters that define the specified low-frequency performance of a loudspeaker driver in an enclosure.) Cheap, open-back in-wall speakers don’t play loudly and they are weak in the bass, but, sadly, sound quality in most applications isn’t as important as price and aesthetics. But despite the prevalence of cheap in-wall speakers, there exists a vast array of really good ones, too. In order to compare an in-wall speaker to an in-room speaker, it’s only fair that they each use high-quality components and are in the same price range. Apples to apples. There are a few high-end speaker companies that produce freestanding speakers and directly comparable built-in versions, and their performance is very similar. A serious in-wall design will have quality drivers, a proper crossover network, and most likely a fully-engineered and braced enclosure. And here is where we run into a problem. Nearly all in-wall speakers are open-back, because it’s cheap, lightweight, and easy. An open-back speaker will annoyingly bleed sound into adjacent rooms, but there’s another problem. A speaker arbitrarily installed in a stud or joist space will not have the optimum volume of air behind it as a speaker in an engineered enclosure will. Most likely, bass will not be very good. Or it might be; who knows? Because of the arbitrary nature of what’s behind a wall when you cut a hole, there can be no predictable bass performance from an open-back in-wall speaker.

It gets worse. Some in-wall companies offer “back boxes” for their in-walls. A back box is usually a flimsy, plastic box that fits behind the speaker in the wall or ceiling. It usually is not very rigid, has no acoustical material inside of it, and it hasn’t been designed with the proper internal volume needed for best bass performance, with no adherence to the Theile-Small parameters of loudspeaker design. They are rarely air-tight. Back boxes are more functional for isolation than for improved sound quality. Also, for local fire codes, some companies offer metal back boxes. And keep in mind that a speaker can be designed EITHER for open-back use OR sealed box use; not both. An optional back-box will almost always be too small, and it will cause the speaker to have a pronounced peak somewhere between 120 Hz-200 Hz with a rapid drop in bass response below that. And do not confuse a back box with a properly designed, substantial in-wall speaker enclosure. (As a caveat, there are a few brands of in-wall speakers that don’t use enclosures that still sound quite good.) There is a place for inexpensive enclosure-less in-walls, but let’s concentrate on higher-quality in-wall speakers, and discuss their advantages and disadvantages.

All speakers in all rooms are subject to compromise. It becomes a matter of how much compromise (and what type of compromise) we can live with. As we explore the advantages and disadvantages of in-wall speakers, let’s assume that we’re talking about comparably-priced and similar products that differ only in that one goes into a wall while one is placed in the room.

Harder to upgrade later
The reality is, once you’ve cut a hole and installed a speaker, the last thing on your mind is an upgrade. A new in-wall speaker will most likely require a different size hole, and that could mean sheetrock work, texturing, and paint. This is not a deal-killer, but upgrading an in-wall isn’t often trivial.

Moving an in-wall over to the left 18” is also much more involved than moving an in-room speaker. Again, you’re faced with sheetrock and paint work. Make sure you pick the correct location the first time, and then double-check a few times before you cut the hole. Carefully calibrate your seating distance before reaching for the saw.

Cannot be toed-in
Sometimes angling a speaker inward will improve the sound by putting you more on-axis and reducing reflected sound from the side walls. Very few in-walls allow for any movement or toeing in. You can compensate somewhat for no toe-in by installing your in-walls a bit closer together. Some in-walls and many in-ceiling speakers do have pivoting tweeters, and this is a feature that may appear to solve a problem, but it creates problems by guaranteeing there won’t be good frequency response from the speaker regardless of where you sit.

Installation is more involved
Obviously, plunking a box speaker down on the floor and running wire (five minutes) is easier than fishing wire through a wall, cutting a hole, and installing an in-wall (a few hours.)

A built-in speaker will be far less intrusive and it can look much better than a big black box sitting out in the room. In addition, the option of installing a really good in-wall speaker may be more appealing to “significant” other members of the family, and you may be able to talk everyone into better speakers because they don’t ruin the décor. “Honey, these in-walls will cost us $1,000 more, but they won’t look ugly next to your Mom’s armoire!” Win-win. (Please note that I eschewed the usage of the mildly-condescending and pejorative term “W.A.F.”) Nearly all in-wall speakers use some sort of perforated or expanded metal grill that can be painted to match the wall color, making it even less conspicuous. Some companies who build-to-order in America (Triad Speakers, for example), even offer custom paint matching of frames and grills.

Eliminate a wall reflection
Freestanding speakers interact with the floor, ceiling, the wall next to them, and the wall behind them. The reflection of lower frequencies with 360 degree radiating patterns causes peaks and cancellations that make bass and lower midrange response uneven. Installing the speaker into the wall eliminates the reflection from that wall, and helps to avoid unwanted peaks and dips in response. Here’s a link to the definitive article on the advantages of mounting a speaker into a baffle, penned by ex-Dolby, ex-THX industry icon/maven and all-around great guy, Anthony Grimani.

More gain
Mounting a speaker in a wall, which becomes a baffle, increases bass. Gain in the bass frequencies will increase 6 dB, and that’s significant. With almost every receiver or pre/pro now employing auto-EQ, those frequencies boosted by the boundary effect can be pulled down so the response is the desired “flat,” greatly increasing headroom, lowering speaker distortion, and using ¼ the power at those frequencies. (“Boundary effect” is the term used to describe the bass increase caused by a hard boundary such as a wall, floor, or ceiling.)

Surround speaker
Good in-walls are especially well-suited for use as surround speakers. If speakers flanking the seating area of a theater can be moved off the floor and into the walls, the possibility of a wine-induced mishap is greatly reduced. Speakers on stands next to seating in a dark theater is a recipe for disaster. There are many brands of enclosed in-walls that market direct-radiating, dipole, bipole, and surround speakers suitable for Dolby Atmos.

In addition to theater applications, many high-end in-wall and in-ceiling speakers work very well for distributed audio or two-channel systems, despite the apparent sacrilege. A well-designed in-wall speaker is capable of providing very accurate reproduction.

So in-wall speakers should not be treated as a pariah, because there are many excellent in-wall speakers available. And remember, the specific application should determine when and where an in-wall speaker is used. There are situations where freestanding speakers are not practical, such as in homes with toddlers (or hockey players), home theaters with acoustically transparent screens, shallow rooms with limited space, rooms where box speakers would destroy the aesthetics, rooms where your wife won’t let you place your Beloved Big Speakers, surround applications, or even a room where you just want to go stealth. Although the stereotypical (blatantly intentional pun alert) in-wall speaker may be a cheesy, 2 lb. plastic 6” 2-way speaker, there are hundreds of really well-designed and great-sounding in-wall speakers. Yes, some in-walls “suck.” But there are plenty of enclosed in-walls that rival freestanding box speakers at the same price point.

Read the Complete Thread
nathan_h posts on April 15, 2016 15:24
Glad to see audiophile grade in walls getting their due. Given the choice, I now choose such speakers when possible.

In addition to all the good points here, just the fact that the designer knows exactly where the closest boundary is, and can tune the speaker to take that into account, is a big advantage.

But I cannot blame people for not liking the added expense and inconvenience of installation.
awdio posts on April 15, 2016 14:02
Actually an in-wall speaker will reduce depth not increase it. With that said, at least with movies. this is not a major concern. A larger concern would be with sound leakage. Designing a home theater properly with serious regard to keeping all noise within the room is difficult enough without introducing more cavities in the walls. Extra measures and care will be needed to minimize leakage of sound from the room. Of course if the home theater is nothing more than a living room then in-walls can be a viable alternative for the obvious reasons mentioned in the article.
fmw posts on November 30, 2015 05:50
I've never heard in wall speakers and can't really comment on performance. I tend to side with the comment that they represent a design compromise but that is just opinion. I would have a problem with the hassle involved in moving them should they need to be moved. That and cutting big holes in the wall are enough to cause my lack of interest.
Archaeologist77 posts on November 29, 2015 17:25
Nice article. I'm just renovating a basement and partitioning half of the open space into a home theater and I was wondering today if I could adapt FULL-SIZE free-standing speakers and subwoofer for an in-wall installation into a baffle wall exactly as recommended in the THX article by A. Grimani.

The question I have:

How do I calculate the ideal curve for the three baffle walls?

Any ideas, let me know.
FABIO SAMU posts on August 01, 2015 15:29
How to construct a back box for in ceiling speakers? Is it good for the sound? Is there a video?
Post Reply