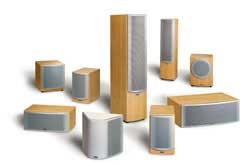 At my last gig with Harman Consumer Group I designed the just-released Infinity Beta Series speakers. As a part of every speaker's design process, each Beta system (except subwoofers) had to go through the well-known Multi-channel Listening Lab set up by Dr. Floyd Toole and Sean Olive. This neutral listening environment has a "shuffler" mechanism in the floor which can perform a double-blind test with four speakers at a time. Each speaker can be shuffled to the same listening location while still behind a black, acoustically transparent curtain.

The room is approximately 30 feet wide by ~25 feet deep. The ceiling is varies around 8 feet high in the listening area and has a combination of absorptive tiles and 2'x 2' foam RPG primitive root diffusors placed at strategic locations to randomly scatter reflections. You sit in the same fixed-position listening chair for each test sequence. The chair is located off the left-right centerline of the room and about two-thirds of the way into the room. There is a very shear black veil across the halfway point of the room. It is so sheer in fact that all of the set-up lights have to be turned off by the lab tech before a listener can enter. Otherwise one could easily see the speakers under test. The shuffler mechanism places the speaker under test directly in front of the listener, behind the shear curtain and about 3 meters away. Before each test series all speaker system levels are level-matched as closely as possible.

This speaker-in-a-neutral-room facility is set up to play a single Harman speaker and two or three other competitive speakers which Harman purchases, usually from a retailer. There are four specific, short vocal cuts, which are always looped. These are played back randomly for each of the 8 sequences that comprise a test. That is, in each single test the speaker that was "A" in the last test might still be "A" or it could be "B" or "C" or "D". The selections are- a very poor quality recording of a guy who sounds exactly like Jackson Browne with Little Feat, a James Taylor, a Tracy Chapman and a Jennifer Warnes cut.

Before they enter the MLL, all speakers to be tested, competitors included, have a series of tests run on them in Harman's large 4pi chamber. The most revealing test we used was called the "spin". The spin would rotate a speaker every 10 degrees for a complete rotation (360 degrees). This was done in both the horizontal and vertical planes. There was then a custom program, which would assign a weighting factor to each of the different angles. What we got outputted onto a single graph sheet was a set of six curves that gave us on-axis, listening window, early reflections and sound power curves plus two directivity indices. All in all these six curves paint an exceptionally accurate prediction of how a loudspeaker will sound in a "neutral" room.

During the time I was at Harman I participated as one of the twenty or so regulars who had been trained to listen critically in the MLL. I've got to tell you, it was very tiring doing this two or three times a week. Especially if you had to listen to several sets of really inexpensive home-theater-in-a-box systems!

The problem with inexpensive HTIB systems is that, as a category, they are sold for their small size and cosmetics. Thus, when held up to the standard of double-blind testing which helps to determine overall faithfulness of sound reproduction via controlled measurements, it is the HTIB systems which tend to stray furthest from the flat frequency and power response ideal. So, listening double-blind, what you end up listening for is the satellite system whose deviation from flat response tends to fall in the most psycho-acoustically "enjoyable" frequency areas. This can become a judgment call among the various listeners.

Another caveat in testing at this extreme low end is that only a single subwoofer is used to A-B-C-D each satellite. Matching each satellite with its own companion subwoofer would insert yet another highly variable parameter into the test, making choosing a "winner" almost impossible. Since I will be evaluating loudspeakers for Audioholics I will attempt to set up a listening room and test methodology, which hopefully can be repeated by an Audioholic in an accommodating dealer's listening room. Audioholics President Gene DellaSala tells me I'll have the use of the Rives Audio Pro Test Kit in a couple of months so I'll be able to verify what I'm hearing.