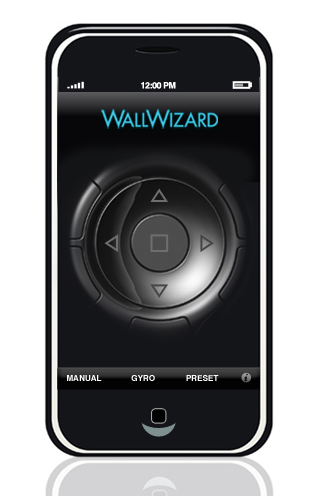 WallWizard gets the dubious honor of being the first ever app (that we've seen anyway) which is designed for enabling both automatic and manual control of mounts from iPad / iPod / iPhone via Wi-Fi and Smartphones via Bluetooth. The "ControlWand" software is proprietary and controls the company's newest motorized mounts such as the TA37 medium tilt mount, the TA55 large tilt mount, the SA52 large swivel mount, and the ZA52 large table swivel stand. All of the WallWizard motorized mounts will be equipped with a port (as a standard) to connect with the Wi-Fi and Bluetooth adapter (sold separately) that permits remote control operation of the motorized mounts with Apple iPad iPod iPhone via Wi-Fi and other smartphones via Bluetooth.

ControlWand allows the user to toggle among Auto, Manual and Gyro modes. In the Auto Mode, the mount recognizes whether the TV is on or off and automatically moves the mount up and down or left and right (depending on the model of WallWizard mount) accordingly. In the Manual mode the user can control the motion of the Mount by pressing on the appropriate direction arrow. One especially cool feature is the Gyro mode where the motion of the motorized mount follows the motion of the handheld device without having to push any additional buttons - as if moving the TV magically. ControlWand's user-friendly interface is organized intuitive so that Apple and smart phone users will feel right at home from the start

Available in the fourth quarter of 2010, ControlWand will be downloadable from App Store's and the Wi-Fi and Bluetooth adapter will be sold through WallWizard's authorized dealers. The WallWizard app will be available at a consumer selling price of $129.

They are motorized lift/mounts for various audio/video products.

Is this meant to be a funny? I honestly can't figure heads or tails from this preview. I even did some searches for WallWizard, ControlWand, and some of those mount numbers. I'm still just as confused as I was.
Post Reply