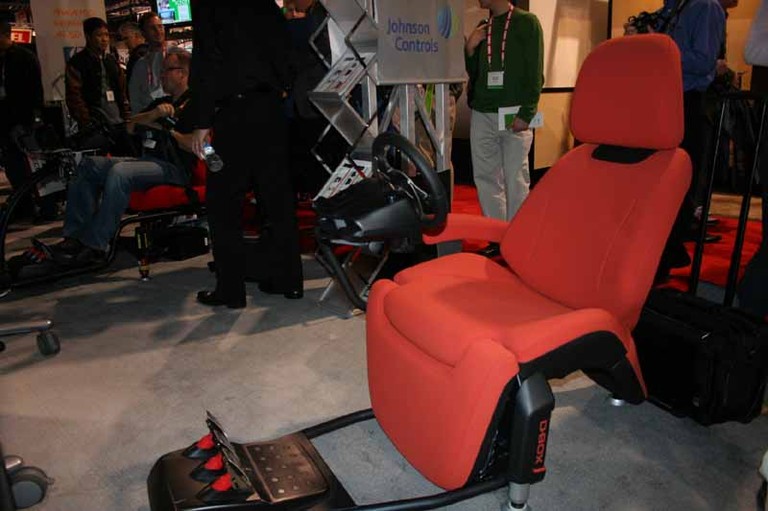 We looked at D-Box’s newest interactive gaming and home theater chair today at CES in Las Vegas.  D-Box’s latest GP PRO 200 from the D-BOX Pro Gaming Series is also an honoree for the Innovations Design and Engineering Awards Showcase at the CES Innovations 2008 Awards.  D-Box’s Motion Code lets you live the action in the comfort of your own environment. The D-BOX motion system is synchronized with the action on screen, making the viewer or gamer feel like he’s actually inside the movie or game, living the action. Built by gamers, the GP PRO200 is the first true motion gaming platform offering a combination of synchronized motion and intelligent vibration with onscreen actions and sounds, providing real time response for serious gamers. In addition to featuring its award-winning GP PRO 200 and Screening Room Series, D-BOX will be introducing the D-BOX Motion Code Premiere Series.  These new motion systems are expected to be launched later this year, and will bring D-BOX’s superior immersive entertainment experience to a new audience of home entertainment enthusiasts.

About D-BOX
D-BOX Technologies designs and manufactures high-technology motion systems destined mainly for the entertainment industry. Its unique, patented technology uses motion codes specifically programmed for each film, TV program or video game, resulting in motion that is perfectly synchronised with on-screen action. By forming strong industry alliances, D-BOX’s award-winning motion technology is creating a global standard in the entertainment world. For more information, please visit www.d-box.com.D-BOX is a registered trademark and Motion Code is a trademark of D-BOX Technologies Inc. Other names are for informational purposes only and may be trademarks of their respective owners.