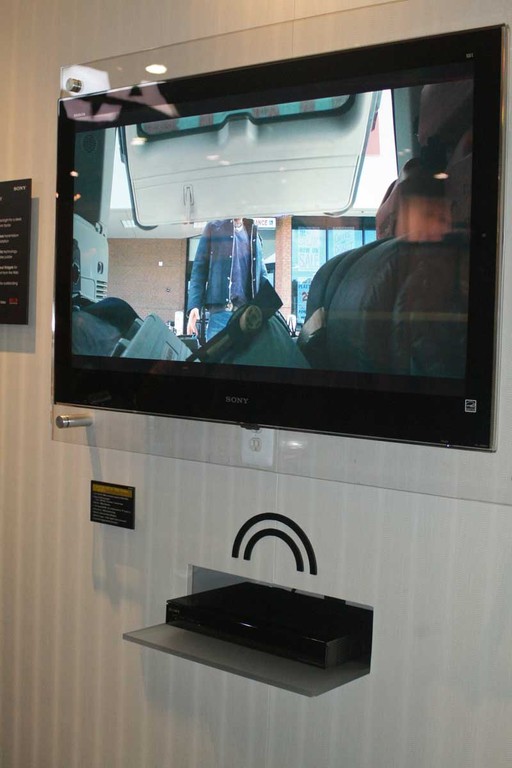 Sony showed off its new ultra-thin BRAVIA LCD HDTV. This new edge-lit LED display comes with two flavors and sizes. Sony claims an exceptional contrast ratio of over 1,000,000:1. But here's where it gets interesting. The XBR10 is really thin - largely because it receives full 1080p via wireless transmission from a separate media box. The receiver is embedded in the TV. This means that you can mount the TV out of the way, over a fireplace for example, and not have to run anything but power to it. That's a pretty compelling product, even if the price is a bit astronomical for flat panel technology.

Not content to just send video to the TV, the media box also accepts Ethernet, allowing users to directly access Sony BRAVIA Internet Video content. The network offers Amazon Video on Demand, YouTube, Slacker Internet Radio, and is scheduled to access Netflix later this year. Since the Bravia uses Internet Widgets powered by the Yahoo! Widget Engine, the possibilities for plug-ins are almost limitless - and they don't require firmware updates for the most part.

The display features Sony’s 240Hz Motionflow technology, which we have yet to fully sign on to with Sony's competitors (we'll hold judgement on Sony's implementation until we see it). Motionflow supposedly goes beyond 120Hz technology by quadrupling the frame rate and interpolating three new frames. In Sony's demo of this technology last year we noticed tons of artifacting, especially with fast horizontally scrolling objects.

The two new XBR10 models are Digital Living Network Alliance (DLNA) compliant, so they can access digital photos, music, and video stored on a PC or other DLNA server using the XMB interface and the TV’s remote control. They also offer a USB input for displaying digital photos or playing digital video and music files from a USB storage device.

Other notable features include:

For those whp care, the new XBR10 models exceed Energy Star 3.0 guidelines for energy efficiency, so even those die hard California politicans won't be able to pry this one out of your hands. Part of this comes from the use of Sony’s Light Sensor technology which adjusts backlight intensity based on ambient room light.

The KDL-52XBR10 and KDL-46XBR10 models will be available this October at Sony Style retail stores, www.sonystyle.com and at and at similar authorized Sony retail outlets across the country, for about $5,000 and $4,500, respectively.

Read the Complete Thread
audiohonic65 posts on October 08, 2009 12:39
This looks good, thanks for sharing this info. I am anyways a big Sony fan, another reason for me to keep them as my favourite.
bandphan posts on September 14, 2009 12:12
Let's hope the specs than the previous Gen XBR
finishers posts on September 14, 2009 06:46
Nice review. The device looks stunning and cool. The reviews are pretty good all over. Engadget has also rated this thing very high. Well i prefer Sony over other brands whenever i purchase display devices
Post Reply