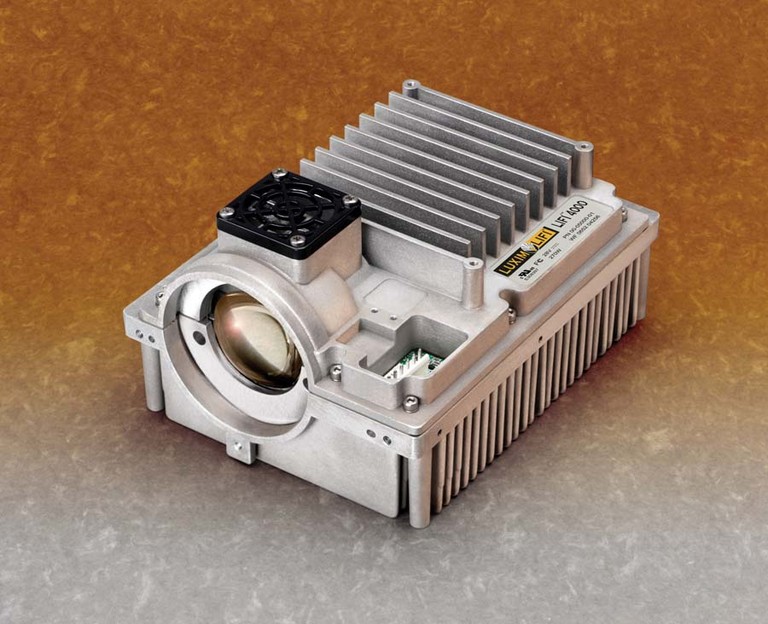 Luxim Corporation has announced that it is partnering with Panasonic to integrate its new LIFI, or Light Fidelity, lighting unit (lamp system) into their rear projection LCD TVs. The LIFI system creates intense light output with digitally-controlled dimming for high contrast applications such as those required for rear projection lamps. The lifetime of the unit is up to 20,000+ hours, a HUGE increase from the typical ~4000 hour expectancy of current bulbs.

The LIFI system also includes a fuller spectrum of color with specific reference to an extended range for reds and also features a faster startup time than typical Halogen-based technologies.

Conventional lamp technologies utilize metal electrodes to discharge energy into a gas (Such as Halogen, Tungsten, etc.) LIFI utilizes RF (radio frequency) energy which is injected (via an antenna of sorts) into a sealed gas capsule emitter. The basic idea is that system is driven by a guided microwave transmission into the sealed chamber which resonates and creates the light output.

Tech Note Submitted by a Reader: A Halogen lamp is an Edison type filament bulb with a Halogen gas inside usually Iodine to keep the life of the bulb longer by chemically retrieving filament metal (Tungsten) deposits from the glass and bring it back on filament. The only lamps that are really gas discharge are the Neon (and such) tubes where a high voltage (thousand of volts) is discharged into a controlled pressure gas environment. CCFL's are a different type of lights where the fluorescent coating of the tube is bombarded with UV from small amounts of Mercury (Hg) inside of the tube excited by a lower voltage (hundreds of volts) than that inside of Neon tubes . CCFL's are a better lamp that evolved from old type of fluorescent tube used for home illumination that were also a filament style lamp. The background illumination of LCD's is still the weak link of these displays and maybe LED's will solve the life duration and power problem if some other light source will not be invented in the future.

Since there are no degradable electrodes, the lifetime of the lighting system are significantly enhanced. The material in the emitter allows for a greater spectrum of color to be displayed as well.

The first company out the starting gate who is picking up the new LIFI system is Panasonic, who announced a new line of high definition rear-projection LCD televisions on August 22, 2007. The initial offerings are available in 50-, 56-, and 61-inch sizes and are available in both 1080p and 720p depending on the line (5 products in all).

Panasonic's displays will start up in about 15 seconds as compared to the 60 seconds of prior models.

LIFI lamps offer similar capability and life expectancies as LED-based lamp technologies, but at a reduced cost of entry. While the actual lamp part of the system is about 1/8th the size of a typical Tungsten lamp, the entire assembly is a bit larger, which shouldn't be a problem for rear projection sets. At 20,000 hours you're nearing the end-of-life for a television set, unless you're the type who runs soaps, QVC and The Price Is Right all day long. The only real negative with the technology so far is that it takes more energy to run, but not so much as to be considered a power hog. Currently a typical HID lamp-based television from Panasonic requires around 240W to run (with volume at maximum). At the same screen size, a new LIFI-based set requires 360W. That's a 50% increase in power needs over prior models (calculations based on a 50-inch set).

LED seems to be the main competition (and a better choice in terms of power consumption and color range) however for some reason the prices have not yet sufficiently dropped on that type of light generation technology. In the meantime, this is a good stopgap, provided that the low-level microwave system doesn't present any issues for users of this technology.

As more and more price drops are encountered with flat panels TVs it will be a miracle if rear projection sets under 50-inches are even in the marketplace a few years from now.

Thanks and best regards

JimLiFi, post: 304771
Is there anyone out there with this HDTV yet? I ordered mine last week from Panny and was curious if there is any hands-on reviews out yet

the website howstuffworks has a review. I can't post the link because I'm a new member.
JimLiFi posts on September 04, 2007 01:19
Mine is in the mail

Is there anyone out there with this HDTV yet? I ordered mine last week from Panny and was curious if there is any hands-on reviews out yet
docbethel posts on August 28, 2007 11:40
$$idea

Now what we need: a lamp with characteristics like LIFI or LED designed to replace our existing 2/3000 hr. lamps. Anybody working on that?
Post Reply