HDMI and Digital Audio
The HDMI spec allows for digital audio and auxiliary data to be carried within the horizontal and vertical blanking intervals of the digital video signal. All basic L-PCMsample rates are supported, including "Basic" 32 kHz, 44.1 kHz and 48 kHz audio as well as "Optional" 88.2 kHz, 96 kHz, 176.4 kHz and 192 kHz audio.

HDMI displays must support all "Basic" audio formats while HDMI sources need to support at least one. Both sources and displays can support any number of the "Optional" audio formats. Audio formats from two-channel 16-bit encoding all the way to eight-channel 24-bit encoding are supported by HDMI. The pixel clock frequency and video format determine the formats that are available for transmission, meaning that SDTV formats can support eight-channel uncompressed audio up to 96 kHz, while HDTV formats can handle the same number of channels at 192 kHz.

In continuing this line of control and data monitoring, HDMI also employs Consumer Electronics Control (CEC), a function based on the AV.link protocol used in European countries. Through the use of additional embedded high-level commands, CEC can have multiple electronics react and configure themselves based on the actions of a single device. For example, a consumer could engage the 'Play' function of a source component which would then turn on and switch to the correct input of a receiver, and also initiate a display device (including tuning it to the correct input.) CEC, if properly implemented across all products, can truly simplify the home theater experience. 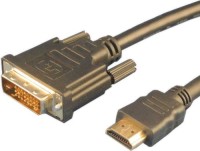 HDMI maintains backwards compatibility with DVI 1.0, however it makes significant improvements upon the format:

There are actually two "flavors" of HDMI connectors, similar to the dual-link and analogue/dual-link DVI connectors. In the case of HDMI, however, there was no desire for retaining any analogue interface and the two formats include a single-link and dual-link connector. The single-link, all-digital connector (15mm wide with 19 pins) is used for consumer electronics applications. The dual-link connector (20mm wide with 29 pins) is primarily for computer applications, and also permits compatibility with DVI's dual-link option.

On a purely personal experience note, I'd like to see a new revision of HDMI connector that provided some kind of strain-relief/secure connection that locked the connector to the receptacle with more than just friction. On more than one occasion I watched an HDMI cable being unfairly stressed by a heavyweight cable design - even to the point that it looked as if the connector would pop out of the receptacle at the slightest nudge. It shouldn;t be terribly difficult to make a backwards-compatible revision to the HDMI connector that offered some additional security without sacrificing ease-of-use. Installers everywhere would likely rejoice.

Originally developed by Intel for use with the DVI connector to provide a secure link between source and display, HDMI modified and adopted the content protection scheme for use with this connection (as HDCP 1.10). This secure transfer mechanism has been endorsed by the majority of major motion picture providers and the FCC has, barring any flips and flops, mandated DVI-HDCP or HDMI-HDCP for all DTV receivers sold as "Digital Cable Ready"*. In addition, the DVD Copy Control Association (DVD CCA) and 4C Entity have also approved HDMI-HDCP for Content Scramble System (CSS) and Content Protection for Pre-recorded Media (CPP M) content playback on DVD players.

The keys which are supplied by HDCP license authority are a 40-element array of 56-bit secret keys and 40-bit binary key selection vector (KSV). Essentially, the source device sends its KSV and 64-bit value to the display device, which responds with its own KSV. The source then simply confirms that the display has not been revoked and the two devices calculate a shared value that will be equal - which is then used to encrypt and decrypt the data on the link. At this point the authentication is established (it is also re-established every two seconds to assure that the link remains secure.)

What makes HDCP rather unique is that it is a "renewable" content protection scheme. An updated list of compromised display devices is sent to al source devices by the licensing authority (through the use of updated System Renewability Messages (SR M) stored on subsequent content medium.) This means that if a display device is compromised, future software that is released can automatically (and rather easily) block the display from being able to decrypt the content.

*This mandate is being phased in over a period of years based on the television screen size.

The HDMI Adopter Agreement mandates that adopters must submit their first product in four HDMI product categories for compliance testing at an HDMI Authorized Testing Center (ATC). The four HDMI categories are: source (e.g. DVD player, STB), sink (e.g. DTV), repeater (e.g. A/V receiver) and cable. ATCs are operated by Silicon Image in Sunnyvale , Calif. and Matsushita in Osaka , Japan . Subsequent products in the above categories may be self-tested by the manufacturer according to the guidelines set forth in the HDMI CTS.

According to your HDMI Connections Beginners Guide,

“HDMI pixel encoding includes support for RGB 4:4:4 as well as digital TV's YCbCr 4:4:4 amd YCbCr 4:2:2 color spaces. The two 4:4:4 encoding formats are both 8-bit per component sampling for 24-bit per pixel delivery. The 4:2:2 encoding format uses up to 12-bits per component for greater color depth.”

If I go with your article, YCbCr 4:2:2 sounds superior,
but the Wikipedia article suggests YCbCr 4:2:2 trims color info for the sake of greater luminescence info, and that yCbCr 4:4:4 doesn't do this.

Any clarification you could provide would be great.

I just spent an hour or more on-line with Sony this morning because our new HDTV, after operating flawlessly for a couple weeks, suddenly yesterday started displaying a clipped HD picture. Specifically, the right and left portions of the picture weren't there. All else was still fine, but clearly some of the basic information from the original picture, that which comprised the right and left bars, was simply gone.

We concluded that the problem is most likely in the cable box, either not decoding or not transmitting that portion of the picture … my question to Sony, which they couldn't answer, is whether the center of a HiDef picture is encoded, compressed, etc., separately from the two side portions. Indeed, from what I have read here and elsewhere, it does appear entirely possible that there is a 4:3 aspect ratio component for the center, and that is supplemented, in full HD, for the full 16:9 picture. So it is possible that those two sections could have gone missing in the cable box. Or IS IT? That's my question…

(I'll add that the section of the picture that does appear is undistorted (no stretching, no compressing (whatever the opposite of stretching would be called), supporting the hypothesis that we're just missing right and left. And I'll also add that the screen works across its face; a DVD played with 16:9 aspect ratio source program will display normally … again, that seems to support the notion that there's something about the signal coming from the cable box.

I'm just curious on the technology, whether indeed the various sections of the 16:9 full HD picture are “packaged separately” in such a manner that a part of the picture could fail and manifest itself in the manner described.
Haoleb posts on April 24, 2007 14:05
Thanks for the replies, Its great when you know your right about something. And you actually are! My boss is trying to get us to use HDMI more often so we dont have to make cables, But unless we're just installing a tv and dvd player and thats it, It really doesnt work in our systems. Personally, im not very fond of the format because i didnt have great luck with it in the past. Unfortunatly though it seems like this is where the HD market is heading so we'll see what really ends up happening!
AVRat posts on April 24, 2007 11:09

Haoleb, post: 264870
Hopefully someone can defintively answer this question. can I input HDMI into a reciever and output through component?

My boss seems to think you can, easily. However im not so sure. first of all it defeats the purpose of HDCP, secondly I have seen nowhere in the manual for the denon recievers we install at work that says you can do this. Their video flowchart shows HDMI in ONLY to HDMI out.

So far it looks like the upcoming Sherwood Newcastle R-972/872 are the only ones that will be able to do the transcoding (down-conversion). http://www.audioholics.com/news/trade-show-coverage/2007-consumer-electronics-show-ces/sherwood-newcastle-r-972-hdmi-1-3-receiver
mouettus posts on April 24, 2007 10:56

pjviitas, post: 217525
HDMI is a good send for folks who connect computers to their A/V systems

Yeah but still… you're not getting the computer's audio out.

I hope they'll come up with a multimedia card (audio and video) for PCs so we can output both signals to the receiver and then receive the hi-def signal and TRUE HD via HDMI from the computer.
Post Reply