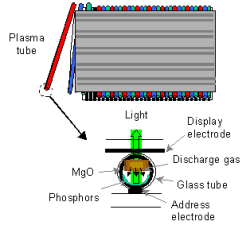 Fujitsu Laboratories Ltd. has been developing a revolutionary new plasma tube technology to produce narrow glass tubes, measuring one meter in length and one-millimeter in diameter, that emit light using the same phosphor structure as in a conventional PDP (plasma display panel). In addition, the company has developed a technology that sandwiches an array of these plasma tubes between two electrode plates to make up a display panel. Fujitsu succeeded in producing a prototype panel using 128 plasma tubes (for a screen size of 128 mm x 1 m) that display moving images in color.

Since it is now possible to produce plasma tubes that measure one meter, the company's latest achievement represents a big step toward commercializing plasma array displays. This technology heralds the advent of large-screen flat-panel displays measuring more than 100 inches diagonally that are lightweight, can be configured into different shapes with a high degree of flexibility, and that can be produced using smaller-scale equipment than required for the production of conventional PDPs of similar size.

The new technologies afford ultra-large displays for indoor use that can curve to the full extent of one's spatial vision, resulting in a vivid sense of immediacy that invites new applications for displays, such as virtual-reality education, virtual stadiums, and other uses of broadband media.

Developed with funding assistance received from NEDO (New Energy and Industrial Technology Development Organization) from fiscal 2000 to 2002, proof of concept of the technology was demonstrated with a prototype display measuring 15 centimeters diagonally in May 2002.

With broadband networking growing more advanced and widespread, very large video displays are expected to be vital adjuncts to the next generation of networking, connecting people together in a visual space that helps them share information directly and participate in a shared environment. Display technologies that enable life-size images of people and objects to be displayed, for example in a display that covers an entire wall of a room, are considered vital in linking people together through virtual shared environments. The advent of extremely large screen displays, therefore, can be considered indispensable to the widespread adoption of next-generation broadband media applications.

For indoor screen displays measuring more than 100 inches, front projectors have conventionally been used, but this approach has a variety of drawbacks, chief among them the inability to produce a sharp picture except in a dark room. Because of these drawbacks, there was a desire for large-screen displays using an emissive-type display. Another approach, creating an array of light-emitting diodes (LEDs), is already available commercially, but creating a grid of millions of LEDs is difficult to do at a reasonable cost. Such a grid would require large-scale matrix drivers, which consume heavy amounts of electricity, making the power requirements of a 100-inch indoor display exceed 3000 watts.

Plasma display panels, based on emissive principle using discharge, actually have better luminous efficiency at larger sizes, so PDPs have a clear advantage over other types of displays in that the bigger they are, the more power efficient they are (in terms of power consumption per inch of screen size). Still, producing a 100-inch PDP would require glass substrates measuring more than two meters across, entailing large-scale facilities and considerable capital investment. 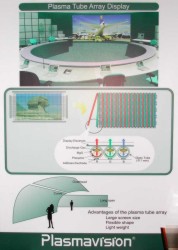 The plasma tube-related technologies have the following features:

The technology is currently being evaluated for luminance lifetime and other reliability factors, and production and assembly techniques are also being developed. Fujitsu expects to complete the reliability assurance process and the development of fabrication and assembly equipment within two years.

About Fujitsu Laboratories Ltd.
Founded in 1968 as a wholly owned subsidiary of Fujitsu Limited, Fujitsu Laboratories Limited is one of the premier research centers in the world. With a global network of laboratories in Japan, China, the United States and Europe, the organization conducts a wide range of basic and applied research in the areas of Multimedia, Personal Systems, Networks, Peripherals, Advanced Materials and Electronic Devices. Internet: http://www.labs.fujitsu.com/en/