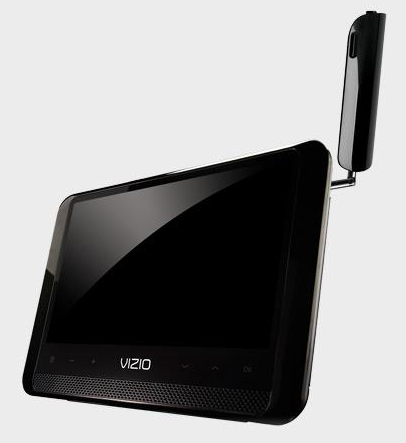 Vizio announced nationwide availability of their new 7" Edge Lit Razor LED LCD Portable TV (VMB070). By expanding Vizio TVs to portable models it enables consumers to enjoy TV and entertainment from almost anywhere. With an 800x480 widescreen "high resolution" Razor LED panel, an integrated antenna, and a sleek design of less than 1" thick, the device seems like a perfect entertainment solution for tailgating, in the kitchen, or even the workshop - anyplace you want to catch your favorite broadcast or pictures with a brilliant, LED high-resolution picture. The Edge Lit Razor LED LCD Portable TV launch is the first terrestrial handheld sized TV that we know of which includes an LED panel. Based on the specs, the LED backlight helps the 7" TV deliver a brighter picture and better contrast. A slimmer design and higher resolution display don't hurt either. While not exactly HD, the screen does have twice the resolution of many competing models. With a built-in fold-away antenna, touch-sensitive TV controls, superior battery life of up to 3.5 hours, it doubles as an LED digital picture frame and provides the ultimate portable TV experience to enjoy TV on the go.

"People want to take entertainment on the go, and there is no reason to sacrifice a quality picture in order to do so. We have been able to add back the fun in watching TV and given it a great picture too. I know how popular it is going to be first-hand - I had to fight my family for it again this morning."

Vizio's 7" Edge Lit Razor LED LCD Portable TV packs a lot of technology into a sleek, 1" thin frame, including features like a built-in fold-away antenna and Dolby Digital sound. With up to 3.5 hours of battery life, it's perfect for backyard barbecues, tailgating parties, or in the bleachers at the game - anyplace you need a brilliant battery-powered TV. You can basically watch your favorite cable programs in the kitchen, then move to the garage for some automotive work or cabinetry work. We think this type of product will also find a niche in a more remote location, like RV use and high-tech camping adventures. The VMB070 also doubles as a digital photo frame - just connect a USB drive to share photos with family and friends.

About VIZIO
VIZIO, Inc., "Where Vision Meets Value," headquartered in Irvine, California, is America’s HDTV and Consumer Electronics Company. In 2007, VIZIO skyrocketed to the top by becoming the #1 selling brand of flat panel HDTVs in North America and became the first American brand in over a decade to lead in U.S. TV sales. Since 2007 VIZIO HDTV shipments remain in the TOP ranks in the U.S. and was #1 for the total year in 2009.  VIZIO is committed to bringing feature-rich consumer electronics to market at a value through practical innovation. VIZIO offers a broad range of award winning consumer electronics. VIZIO’s products are found at Costco Wholesale, Sam's Club, Walmart, Target, BJ's Wholesale, and other retailers nationwide along with authorized online partners. VIZIO has won numerous awards including a #1 ranking in the Inc. 500 for Top Companies in Computers and Electronics, Fast Company's 6th Most Innovative CE Company of 2009, and made the lists of Ad Age’s Hottest Brands, Good Housekeeping's Best Big-Screens, CNET's Top 10 Holiday Gifts and PC World's Best Buy among others. For more information, please call 888-VIZIOCE or visit on the web at www.VIZIO.com.