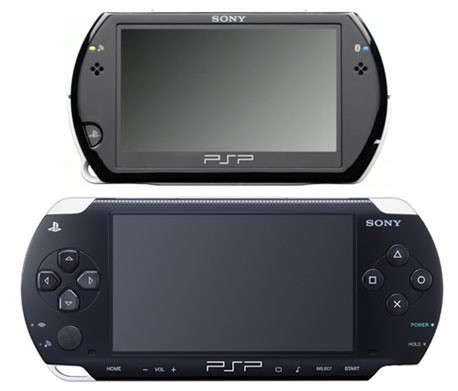 It’s Christmas, like any dad I wanted to get the perfect gift for my son, Bruce. My son often sees his dad playing with the PlayStation 3 and when I’m feeling generous I even give Bruce a try. So, I thought… what would be better than giving my boy the smaller, portable offspring of the PS3 itself – PlayStation Portable. A crash course in PSP was a lesson in portable media and state of DRM today. But despite its heavy reliance on Sony and its DRM, I decided on the latest PSP called "Go" for a variety of reasons.

The last PSP before the Go came out was the PSP 3000. Today the 3000 retails for slightly less than Go, and can be found in a Limited Edition Assassins Creed, Gran Turismo or Hannah Montana pack – something for everyone depending on your age and gender. This makes the 3000 a tempting offer so it’s good to know what you’re getting into if you’re debating a portable gamer.

The most significant change from the PSP 3000 to the new PSP Go is Sony's decision to scrap the UMD drive in favor of 16 GB of internal flash storage. Letting “Go” of the ROM-drive provides greater portability, a longer battery life and lets Go slim down further than its predecessors. Go features slide out game controls - it’s very slick! When the game controls are slid back under the screen, the PSP Go will fit comfortably into your shirt pocket. But for all its positives, the lack of a disc drive carries some negatives.

If you wanted to see evidence of the decline of the disc format you need look no further than the fall of Sony’s Universal Media Disc (UMD). PSP Go is a look into life without discs as it relies 100% on digital downloads for games. My son is six years old - a very computer and tech savvy six - but only six. For him, like any new PSP user Go is a great opportunity for a fresh start with the game system. We don’t own, nor even know anyone that owns, any PSP UMD games. Plus, it's probably best to avoid requiring a six year old to eject and insert discs every time he wants to play a game.

But be warned - no disc drive means you're at the mercy of one electronic megalith's interpretation of private property and you're forced to take a sip from its cesspool of Digital Rights Management.

You can only purchase games from Sony's PlayStation Store. You won't have an opportunity to lend out your games to any friends. Sony keeps a tight lid on where media purchased at its store is going – an Internet connection is not only required to download your media, you have to keep your connection to move the program to your PSP.

Sony provides several ways of connecting Go. The portable device even has its own Wi-Fi capabilities and lets you surf the Sony Store through your portable device. Although I don’t recommend this if you're planning on giving it away as a gift.

After I bought the Go, I wanted to set it up for my son so he could start using it Christmas morning without any fuss. I wanted to load a game or two, a few of his favorite Pokemon cartoons and some songs – he's particularly fond of the Beastie Boys and Black Sabbath.

Media Go seems - from my brief observation - a totally inept program. I only wanted something that would let me load files onto the PSP. I installed Media Go on my PC and it wanted to sync with iTunes and then control my entire media library. Then it had the audacity not to recognize most of the media-file types I had on my computer. What was most frustrating is I had even transcoded some video files my PS3 couldn't read to a PS3/PSP compatible .mp4, still Media Go wouldn’t let me transfer it to the PSP Go, deeming it incompatible.

When connecting the PSP Go to your PS3 for the first time you have to register it. Yes, it’s part of that creepy sell-your-soul-to-DRM thing I knew Sony would make me do. But it was a quick, painless process. I shopped online for a couple of games I thought would appeal to my son and downloaded them to my PS3. After running an install program, the PS3 knew these were destined for another device and, after connecting PSP Go, transferring the games via USB was quick and easy. Although PSP Go and PS3 are both Bluetooth compatible, I couldn’t transfer files wirelessly.

Games available for PSP are probably a bit on the adult side for a 6-year old. But he’ll grow into it quickly. Once you register your PSP with your PS3, transferring games is very easy. Although you’ll have to keep the connection to the Internet in order to move the game from your PS3 to your PSP. Sony wants to keep tabs on exactly where its intellectual property is going. After the transfer, the PS3 will ask if you'd like to delete it from your PS3 HDD with a default setting of "Yes". I declined deletion and will use my PS3's limited storage to save the portable games, partly because I don't know how Sony is going to deal with my purchases from its store. One of the most difficult challenges is trying to figure out exactly what files are compatible with PS3/PSP and which aren't. Supposedly, AVI files and now DivX are PS3 compatible, but I've never gotten them to work.

It's easy enough to stream media from my PC to my PS3 using a program called PS3 Media Server (or PMS). PMS streams any video file I've ever been able to find online, seamlessly to PS3. I can even use PMS to move files from the PC to my PS3 HDD. But it does no good if the file is not readable by the PS3 hardware itself.

To meet this challenge there is a popular and free transcode application specifically designed for Sony’s PlayStation family of products called PS3 Video 9.

Although PS3 Video 9 comes highly recommended for any PlayStation owner, the program is very clunky. It's not particularly intuitive and had lots of links to places you don't really want to go, as well as lots of ads to make it one ugly utility.

But PS3 Video 9 gets the job done! It provides a few quality options and lets you tailor video resolution to either PS3 or PSP devices. PSP videos don't need all the resolution found in High Def movie files that your PS3 can take advantage of. So, trimming down a 1080p video file is a great space-saver for the portable game system's memory. My son is going to be thrilled when he gets his hands on what Santa brings this year. Although I'll have to put some parental restrictions on his usage and ensure he's not tossing it on the couch when getting wild with friends, as six year olds do. My intention is to make long car-trips a little more bearable and fun than they used to be. Now he can watch Pokemon and a listen to few songs or play games in the car. He'll learn how to responsibly use headphones for audio, and that sitting around the house all day playing video games is a one-way ticket to getting extra chores around the house.

One of the bad things about the PSP Go as my son's Christmas gift is I can barely put the thing down. It's got a seductive, gadget sex-appeal that makes it a pleasure to just slide it open and caress the buttons with your fingertips while navigating Sony's XMB operating system. The graphics quality is quite amazing - light years from the old Gameboy systems of the past. Playing back .mp3 music files is intoxicating. Even its tiny stereo speakers are serviceable, but a decent set of headphones really light the system up. The on-screen visualizers make music listening on PSP Go an addiction. Highly recommended.

Read the Complete Thread
perato posts on December 31, 2009 20:47
The review states “I can even use PMS to move files from the PC to my PS3 HDD. But it does no good if the file is not readable by the PS3 hardware itself.”

PS3 Media Server is capable of transcoding video files to a format that PS3 can read. It may not work for every file, but it does work for many containers/codecs. Transcoding can consume a fair bit of processing power though.
Wayde Robson posts on December 22, 2009 12:35

BoredSysAdmin, post: 663885
To Author: Your six years old is fond of Black Sabbath??

There is hope to rock and roll after all !!

He hears a lot of rock from me. I listen to lots of different music but he really tunes in anytime there is a driving beat. His favorite would probably be a toss up between Iron Maiden and Black Sabbath.

Iron Man by Black Sabbath is his favorite song.

This is my son Bruce at the cottage last summer, he's giving me a demo of his heavy metal show on the sword-tar. The Maiden influence is apparent:

There is hope to rock and roll after all !!

Rock on !!!!!!
Ares posts on December 22, 2009 09:17
Great review of the PSP Go, I got the chance to look at one thought about upgrading from my PSP 3000 but there are a few things I don't like about this model.
1) Battery is not user replaceable.
2) Can't use old PSP accessories
3) Can't play UMD Games.
after comparing the PSP GO to the PSP 3000 I"ll stay with the 3000 IMO the Go isn't worth the money considering you can't use your UMD collection or any of the old accessories and the fact that you can't change the battery but that you would have to send it back to Sony so they change it when it will no longer carry a charge.
Post Reply