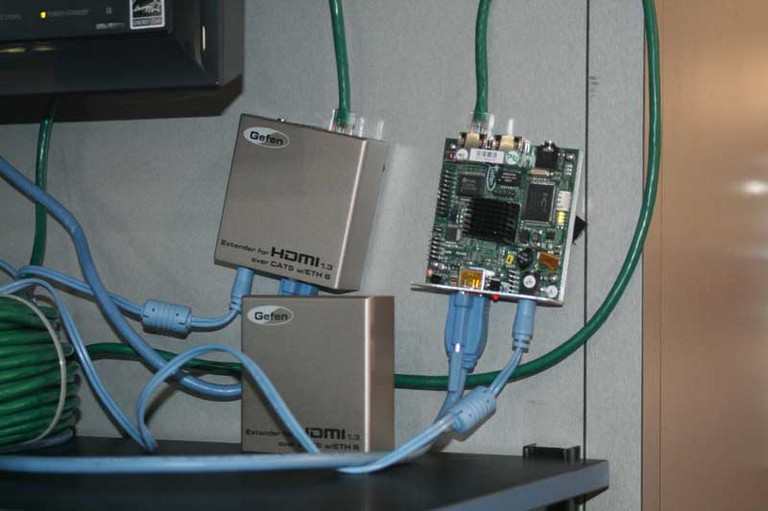 For some technical or licensing reason, Gefen cannot apparently call this an HDMI 1.4 product, likely due to the fact that it wasn't certified as such when it headed into final production. They do, however call it an HDMI 1.3 product that is "Future-Proof" with support for HDMI 1.4, allowing Ethernet support and the return audio channel functionality. The HDMI v1.3 CAT-5 Extra Long Range (ELR) Extender allows installers, with just one CAT-5e or CAT-6 cable, to carry the 1080p full HD resolutions of HDMI with Ethernet and IR back channel up to 330 feet (100m) in distance.

Gefen is using a proprietary flavor of technology called HDBaseT to power this long distance extension solution for HDMI and Ethernet. From what we've seen, allowing custom installers to make long runs at the latest HDMI format is a solution that is going to be sought after by many this coming year as manufacturers begin to roll out products supporting the new features of HDMI 1.4.

Note:  Note: The HDMI1.3-CAT5-ELR Extender is only fully HDMI and HDCP compliant when both power supplies are used.

The Gefen HDMI v1.3 CAT-5 ELR Extender will retail for $699 which includes both the transmitter and receiver.

The problem with the old HDMI specs was that a company could send their shortest length and have it tested and that qualified them to advertise that their cables meet the spec, without testing any of the others in their line.

I still don't like the lack of retainer at the connection points and the orientation in many cases. A heavy cable and plug inserted horizontally and being affected by gravity is NOT the best way to assure longevity or reliability. I admit DVI is too bulky but I think a round connector with a spring clip would have been better.
audiophile1882 posts on October 01, 2009 13:44
Crazy HDMI people

So true. HDMI is being rather odd about it, they will not allow retailers to claim they have v1.4 technology. They think if you use the term 1.4 it will throw people off, cause we are all super stupid!

Companies can get around this by posting what features their cables can carry. For example CableWholesale's HDMI v1.3 cat2 will support all new functions of v1.4, without the ethernet channel, even though they say it is coming soon…

Check it out: at Cablewholesale.com

It is stupid and rediculous, and everyone is ignoring it! I wonder if they will go after Monster, who is in CLEAR violation of this! Maybe they will allow people to actually say the cable is v1.4 once the testing is done. Its odd, because if you want a v1.4 high speed cable without ethernet, it IS!!!! a Cat2 v1.3 cable!!!!! The change to v1.4 is a CHIPSET update!
Post Reply