Why I Hate Going to the Movies! 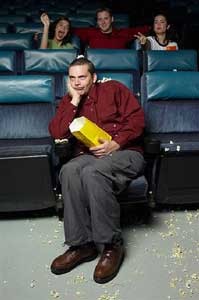 I even hate that expression, "the movies". When did the movies turn into a geographical location? Now, mind you, I'm not talking about the films themselves, (that would require a wholly different article) but rather the experience of the movies. Movie going if you will.

Flip on any 1/2 hr. made-for-cable documentary about filmmaking and most likely you'll see a slick-pate Martin Scorsese in a plush velvet theater chair waxing eloquently about the charm and magic of the movie going experience he had as a child. You can replace Martin Scorsese with almost any famous director, really. They all have similar tales and about the first time they were exposed to films and the wonder of the movies. I would have loved to have been there - to that special place I have heard so much about. Because in all fairness, my local Speaker Fart 7 Cinema or soul swallowing Google-Plex hardly seems the place of Hollywood magic to me.

I take films seriously... even comedies. I like to watch. I like to absorb. I like to suspend disbelief, and I like having my buttons pushed. I can't think of a more inappropriate setting for this type of consumption than your average modern movie theater. Pimply faced and restless teens fondle each other in the back rows amid the constant chirping of cell phones and pagers; brittle nailed seniors ask their wives to repeat the previous lines into their hearing aids; and cargo pant clad dopes cheer and react to the action on the screen as if it's an arena football game. I haven't even gotten to the puke-inducing rancor of movie theater butter wafting through the air alongside the cheap perfume of the couple who had to sit next to me among all the empty seats in the theater. Why couldn't they sit next to the person behind me? He's hard to miss, really. He is the guy who has no concept that my seat back is only a few inches thick and doesn't have truck shocks to absorb the constant thumping of his feet.

Fed up with the movies, I bought my first home theater system 7 yrs. ago - a modest Dolby surround-in-a-box system. Living in a tiny apartment, I figured it would be good enough - and it was. After hooking it up and popping in my first DVD, Sam Peckinpah's Straw Dogs, the system-in-a-box successfully hammered the last nail in my proverbial movie going coffin. I was hooked in a big way. This minor investment took the movie going experience away from the people in the theater, of whom which I was forced to share space with, and into the familiar environs of my living room. The phone ringer was turned off. I could run to the bathroom in comfort. I could adjust the lights the way I wanted. I could even watch the darn flick in my underpants! Now this was liberation! This was the movies! This little investment was my $300 middle finger to the goofs who laughed behind my seat during battle scenes in Saving Private Ryan; to the two Raisinet gobbling trolls who found it necessary to repeat every line from Coming to America as the movie unfolded in front of me; and especially to the anonymous knucklehead who sent an ice-loaded cup of watery Pepsi careening into the back of my head as I watched Tom Hank's career watershed, The 'Burbs.

Seven years later, and having considerably upgraded my home theater system, I remain as adamant as ever about not returning to the movies. Sure, while the occasional must-see-immediately-film (City of God, 28 Days Later) or bored-girlfriend-on-a-rainy-Sunday will get me to the theater. It's usually within minutes of hearing the first cell phone ring or idiot laugh at the most inappropriate moment that I am reminded why I have avoided the movie theater like I would avoid eating watermelon in a tuxedo. All this ultimately does for me is galvanize my patriotism of the home movie going experience.

As with so much of the art we consume and enjoy, the traditional mediums of embracing them are evolving. It is only a matter of time before first run films premier in our homes, and not in movie houses.

Home theaters, from my first humble system-in-a-box all the way to full blown Dolby Digital EX systems, are giving us the opportunity to reclaim the movie going experience we have heard so romantically described by generations past. To reclaim it on our own terms without the anonymous rock concert setting of our local theaters. Now, of course, a small inexpensive home theater cannot replace the monolithic screen and kidney rupturing sound systems of a good movie theater, but the home system can give us a different environment in which to enjoy the movie - an environment that is long gone from most of today's multiplexes. Film has the power to inspire and to entertain us just as powerfully as ever; and today's home theater systems are a truly awesome way to allow movies to continue to work the magic of which they are capable.