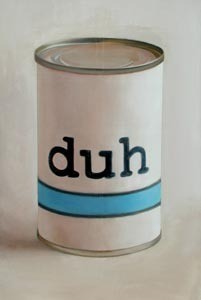 This announcement is a big can of 'Duh'

In a remarkable, but delayed, achievement of common sense, Universal Music Group announced plans to drop prices on all of their new CDs to $10 or less. Universal is one of the largest music companies in the world, so this is big news in an industry that changes directions slower than the Titanic. The plan, which goes into effect this summer and will last through the rest of the year, is designed to reclaim consumers who have ditched the overpriced CD in favor of the digital download over the past several years.

Wow. CDs for $10... that's just... profound. I certainly hope the man in charge of that decision gets a huge payout bonus. Considering that iTunes is now the largest retailer of music in the U.S. and has been selling $10 albums since 2003, it's absolutely mind-boggling that the music industry is NOW trying to play catch-up. To-date iTunes has sold over 10 billion songs. Yes, that's with a 'B'.

The new "trial" (heaven forbid they actually commit to anything) will include a sample of the label’s new releases and include most major retailers like Best Buy, F.Y.E. and Wal-Mart. Of course albums that have dual disc sets and special features will still break the $10 barrier and sell for more.

According to an article from the Assocoated Press, Jim Urie, the head of distribution at Universal, said CD sales had doubled at stores running a limited test of the $10 pricing strategy.

You think? Maybe? Welcome to the year 2010, Universal. What's really sick is that there are other music companies that won't get this until next year after it's proven that "lower prices equate to more sales". Digital music and the record labels/studios are like a race between the tortoise and the hare... except that the tortoise has been shot and is crawling on two legs... with a crushed shell... and the hare is riding in a Ferrari.

Lower prices, higher sales. It's remarkable just how simple that is. Genius, in fact. Absolute genius. It will be interesting to see if Universal will share this insight with other companies. Perhaps they should consider teaching it in college economic courses. Considering the fact that CD sales have dropped by more than half since 2000, you would imagine that this would have been tried a lot earlier... like the day after iTunes launched.

According to Mr. Urie, "the casual fan isn’t willing to pay $15 dollars for a regular CD."

No, Mr. Urie. They really aren't. And they haven't been willing for over 5 years now.

Retail experts are expecting the new pricing model to increase sales volume by 30 percent or more.

I for one have never got into buying music via download. I think honestly to date I have only bought (from Itunes) a few tracks from Coppola's “The Conversation” soundtrack. I understand the record companies issue with illegal downloads but I think their ire is misplaced. I've downloaded music from bands like “Modest Mouse” for instance because someone told me I would like them, and ended up buying about 6 of their CD's. If someone hadn't ripped me a copy of Porcupine Tree I would most likely have bothered to take the chance of buying one of their CD's (DVD-A) without having heard them first, now I am working on buying their catalog. The Media companies see every illegal download of a song or a movie as a loss of revenue but it just isn't true. They don't take into account that people just have crap on their hard drives because they can, just because you have it doesn't mean that you would have otherwise paid full retail for it. I had a girlfriend who I swear to god had one Barry Manilow CD. I'll bet she has a bunch of stuff now on her computer but that doesn't mean the record companies would have ever saw a dime out of her. It is the real collectors that support the bands and the labels, and real collectors would never be satisfied with compressed MP3 tracks, their is a difference between collecting and aggregating. Back in the day before CD's everybody made cassette copies for everybody. What did they think those omnipresent double cassette decks that came with every set up you could buy were for? Later when CD-Roms became affordable it was ripping and burning. Did it hurt the music industry? not really. The problem for them is the ubiquitous MP3 player. When I was a kid (and still today) my dream was to have a big stereo system. Today kids more often than not just have an laptop and an MP3 player. Is it any wonder the music biz is in trouble? As a side effect the younger generation seems to have track mentality and the concept of say a “album” much less a concept album is lost on them. Thank god for Pink Floyd's “The Wall” which has done the most as I see it to keep the concept of “album” alive in the younger generation. I really don't see all doom and gloom for musics future however in fact I am heartened. My teenage son and his friends are largely into the same music I started out on ..Led Zeppelin, The Beatles and the Stones, Dylan, Neil Young ect. When I come home from work and he and a few of his friends will be in his room and I hear them listening to Hendrix it warms my heart. I am reminded that in all things the Universe seeks balance.
myriad1973 posts on April 08, 2010 19:58
Oh…. and maybe if they would stop mastering music to be so LOUD, that would be a plus.
akrauss posts on April 08, 2010 10:35
It's about darn Time !!!

Thank you Clint for coming down strong on the industry. I have been ranting for years about the price of CD's. In addition, with many stores like Borders removing their listening stations, I am not willing to take a chance on a CD for $15+ dollars. Yes I realize I could go listen to 30 second clips online, but for me the trip to by a CD was in many instances a spontanious decision and I would simply enjoy browsing the listening stations to find some new music. I cant think of too many products that actually have increased in price as their maturity cycle moves forward.
sgtpepper9 posts on March 30, 2010 22:07

sgtpepper9, post: 704711
If it was so important, they would make it so that the CD couldn't be ripped at all.

Sony tried to do that. That backlash was ferocious.