Tom's Story: One Shoe to Rule Them All, and in the Press Room Bind Him 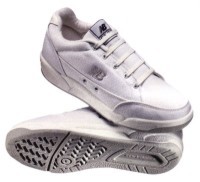 After my whopping 3 hours of sleep, I trudge downstairs to have breakfast with the gang. I'm so tired I can't decide if I should call my wife or not because I can't figure out if she's an hour ahead or behind. I decide that discretion is the better part of valor because if I wake the baby up, I'm doomed. Instead, with one eye open, I debate whether the 2 nd degree burns I'd get from latching my lips on the coffee dispenser would be worth the extra wakefulness.

We discuss our lack of sleep, our plans for the day, and how much we hate the car-rental-company-who-shall-not-be-named. The car ride starts with four seatbelts for five people but the fifth is quickly located; and Ray, a seasoned Los Angeles driver, takes the Buick to the limit. We fall out of the car, kiss the ground, and head into the convention center.

Did I mention we got up at 6:30am? Went to bed at 2:45. Convention starts at… drum roll please… 10! So I wander around, determined to get someone to talk to me about their products. I don't care that they are still unpacking boxes. I don't care that they are just entering the building. I have to be up and on my A game - so do they. I finally get someone at Sharp Electronics to talk to me and my day rushes by.

I expected a little more craziness at this conference. There were a ton of people there, no doubt, all geekified in their gaping maws. "Oooo, I want that… and that… and that!" Most of the exhibitors were really nice - once you got them to talk to you. Forget Sony, forget Harman, their booths are a madhouse. Maybe tomorrow. Got lots of pics… not necessarily sure what they are of, but I got them.

Quickly enough, lunch time rolls around and I'm in the Press Room with the gang enjoying the free food (which amazingly disappears as quickly as they set it out, even though the room is nearly empty). This is obviously much to the dismay of the caterers who are looking around frantically for the gremlins that are stealing all the food? "MORE!? We just restocked the table not FIVE minutes ago!" Don't you know? The Press is hungry for news, and ham, and chips, and caffeine. Especially caffeine. I'm not on a liquid diet, but I put down at least 3 cokes during lunch. Doesn't really help my drooping eyes, though.

We all start posting, because we are freakish workaholics, until Gene proclaims, "It's no good all us sitting here posting, some of us need to get out there." I know what that means: Low man on the totem pole gets to stay behind and post while the others get to go and mingle. That's OK, I was ready for it. What I wasn't ready for was the "watching everyone else's crap" duty. So, there I am, taking up half a table (only about 7 in the whole room) with three laptops (I'm using two of them), a full sized keyboard, about 5 bags (one for each laptop and a couple of promo ones), and a pair of tennis shoes.

Ahh, we finally get to the shoes. Oh yes, true believers. Tennis shoes. Why? I'm not really sure. I thought they were being brought so the person could wear them while running around the convention, but no, there they were, like an albatross around my neck. Why? Cause I gotta pee. I mean BAD. And I realized it about 5 ½ seconds after everyone left me with all their crap and told me they'd be back "later," whatever that means.

So hours (and I do mean HOURS) drag by as I get together 10 or more summaries of products that I and others have seen. I could probably take all the bags to the bathroom with me (it'd be heavy with all the laptops and the promo material) but I can't get the shoes to go anywhere. I'm full up (in more ways than one). I guess I could ask someone to watch them for me but then I have flashbacks of that Richard Reid shoe bomber guy and could just see someone watching me toting out 500lbs of equipment but leaving a brand new pair of shoes behind to be "watched" by a total stranger. No, they won't call Homeland Security. Not a chance. They won't hold me in a foreign prison and make me put my underwear on my head (make me, I mean let me ). Not a chance.

So, there I am, anchored to my spot, getting more and more angry at the two inanimate objects sitting on the chair next to me. They are just shoes. I know that. But I hates them. I hates them like speakers hate a power surge, like Gene hates all channels driven questions, like slugs hate salt. And my eyes are turning yellow. I think of what it would take to destroy them. I look around the room. Can't just throw them away… they may be found and that would involve the answering of uncomfortable questions. Can't burn them up or annihilate them… too many witnesses. No, there is nothing I can do. I am at the mercy of the shoes.

Eventually, I am rescued. I run to the little boys' room and, after the third straight minute of standing there, I realize the horrible truth: I miss them. The shoes. I mean, they were so new, so white. The way they gleamed in the florescent lights. The way the laces fell seductively over the tongue. I miss them. My precious.