The Italian Western and the American Western 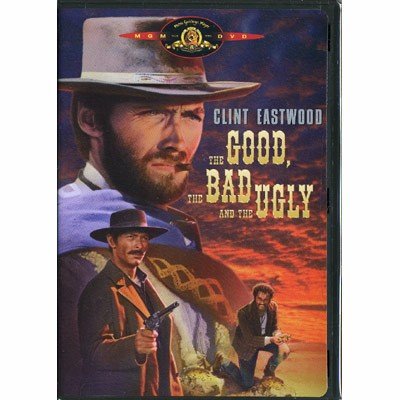 A sweeping panoramic vista of a green valley bathed in morning sunlight shows mountains looming ominously in the background, standing firm and perched like majestic sentinels overseeing the forests and fields stretched out before them. A shabby little dirt road bordered on one side by rundown and rickety wooden buildings and on the other by broken and derelict covered wagons. As the wind batters the wagons, it stirs up the dust and sends tumbleweeds rolling awkwardly down the road and past a dingy stray dog wandering aimlessly through the town. These could very easily be the opening shot of either an Italian or an American western film, and while the two types of films share some similarities in structure and plot, they are also very different in tone, and portrayal of life in the old West. Although the Italian western would borrow heavily from the American western, it would also impart its soul and leave behind a lasting influence that still lives on in the western films of today.

"He shot the eyes of bad men," Jackson Brown eloquently sings in his song about the immortal Italian director Sergio Leone. Sergio Leone was not the only director of Italian westerns, or spaghetti westerns, as they would come to be known, but he was the best: The master!  Some other notable directors of the genre include Sergio Corbucci, Sergio Sollima, Enzo G. Castellari and the godfather of gore and legendary Italian horror movie director, Lucio Fulci.

When Sergio Leone's "A Fistful of Dollars" was released to American audiences in 1967 no one realized that the western movie genre was about to be transformed forever. The film itself was a retelling of Akira Kurosawa's now classic samurai film "Yojimbo." However, this was a western that had not been seen before, at least not in America. It was low budget comparatively and the stars, including Clint Eastwood, were unknown in this country. But it had something the American western did not; it was edgier, and darker in tone. However, this was only the beginning of more gun-slinging goodness to come. Leone followed it up with two more films, "A Few Dollars More," and the now legendary "The Good, The Bad and The Ugly." These would come to be known as the man-with-no-name trilogy.

Leone had started something; the movies would start to pour out of Italy just as sci-fi poured out of Hollywood in the fifties. Some of these would push the envelope in style and essence and transform the western forever. One such film was "Django," a film by director Sergio Corbucci and staring the chiseled Franco Nero who would later star in several other notable Italian westerns. Corbucci strived for a realistic and darker look and even used a costume and set designer that worked frequently with Leone. The town was dirty, the people were dirty, the language and dialogue were rough and raw, and this was one of the first westerns that featured graphic violence and gore; one such scene is the now famous ear-cutting-off scene. This gore would later be taken to the extreme in Lucio Fulci's "Four of the Apocalypse" in 1975. These aspects had largely been absent from the American western.

Not every western film that came out Italy was an instant classic. The Italians had their share of duds to be sure, but mixed among the bad ones were some grand ones as well. Films like "The Great Silence" from Corbucci that features a mute gunslinger, vast snow-filled landscapes of Utah, most of the good guys getting gun downed, and a bleak ending in which the hero is killed. Other classics include "Texas Adios," "Companeros," "A Bullet for the General," "A Man Called Blade," and "Keoma." These films brought to the genre raw violence, vulgar language and attention to details that the American westerns did not have up to this point. Weapons and shootouts were usually represented more accurately, and the films were often more political in nature as can be seen in "Run Man Run" and "Companeros," which both deal with revolutions and politics in Mexico.

The portrayal of women was also very different in the Italian western. One thing that is rarely if ever seen in an Italian western is a woman with so much makeup that she looks like she stepped out of a fifties musical; the women were made up to look just as dirty and sweaty as the men. Another missing element was romance; in fact, most Italian westerns had very little in the way of romance compared to their American counterparts. The little romance that was portrayed in an Italian western was usually brief, not as essential to the story line, and the women were usually treated more unsympathetically. However, they were often portrayed as much stronger characters. One might say the Italian westerns were chauvinistic, but in reality they were more accurate in their portrayal in women of the era and in those situations.

In 1969 the master himself, Sergio Leone, would unleash on the world what is nowadays regarded as the greatest western ever made, "Once Upon a Time in the West." With input from future directors Bernardo Bertolucci and horror maestro Dario Argento, this sweeping epic tale with a mesmerizing score from Ennio Morricone has not been equaled to this day. The film intertwines long scenes that contain very little talk with sudden explosions of violence. Cast with great actors such as Henry Fonda, Charles Bronson and Jason Robards and ending in classic Leone style with an extended shootout between the hero and villain, it is a perfect film. While some would argue that Leone's "The Good, The Bad and The Ugly" is the ultimate western, the more polished "Once Upon a Time in the West" surpasses it at every level with the exception of the final shootout; that honor still belongs to "The Good, The Bad, and The Ugly." However, there is no disagreement that Leone has the distinction of being responsible for the two greatest westerns ever made.

The definition of insanity is doing the same thing over and over again and expecting different results.

That comment made me cringe!! It gave me a flashback of a freshman year college Calc course I took 20 years ago.

The definition of insanity is doing the same thing over and over again and expecting different results.

No offense intended to the original poster.


As for tutorials, JL Audio has an excellent one on enclosures, drivers and more. It is mostly geared for car audio, but much of it applies to subwoofers in general. www.jlaudio.com

Thge definition of insanity is doing the same thing over and over again and expecting different results.

No offense intended to the original poster.


As for tutorials, JL Audio has an excellent one on enclosures, drivers and more. It is mostly geared for car audio, but much of it applies to subwoofers in general. www.jlaudio.com

brushro, post: 263089
I'm experiencing alot of bass & boominess so my thinking is:buy a smaller set of front speakers & add a small sub.
I'm not setting a budget yet until I gather more tech info for my specific issues.
Thanx to all!

As I told you the first time you asked this very same question, you're continuing to bark up the wrong tree.

Reposting the same question over and over, and hoping to get an answer “you like” isn't going to make your room sound better. If you continue to persistently ignore the acoustic reality of your soundroom, then you cannot be helped.
westcott posts on April 19, 2007 11:15
Well, I am a little confused. When you select the discuss in forum button for the Italian vs. American Westerns, you get directed here.

Jeff Larsons review prompted me to watch “Once upon a time in the West”, by Sergio Leone via my NetFlix account last night.

I was very impressed with the video transfer on many of the close ups. And, as Jeff pointed out, the wide landscape shots and the attention to set detail and costumes was readily apparent through most of the movie. It was also played in Dolby Digital 5.1. I was expecting a much older format with poor video quality and was pleasantly surprised.

I was also surprised that I had not remembered seeing this movie in its entirety. It is a slow moving film that focuses on the artistic aspects of movie making and it is appreciated but it can be old after about the tenth time of lamenting over such slow moving scenes.

The plot was very well done. It did not reveal itself blatantly and it always kept you wondering exactly what are the motives of the different characters and what was the true treasure that everyone was getting killed over. I like that. Most movies tend to insult the intelligence or divulge the plot way too early in the movie leaving nothing to think about.

The acting is very good although the dialogue is hard to follow unless you pay close attention. The music is very memorable and even if you have never seen the film, you will recognize the music style implemented.

Some of the close ups were truly remarkable and far exceeded my expectations for detail in such an old film. I was also surprised that their was a short wait on NetFlix for the DVD.

My only negative comments is that it does move a little slow at times and the auction scene was a little less than convincing.

It is one of those classics that is a must see and it can be appreciated for its artistic statments but its slow pace hurts its overall package and I can understand why other westerns are more popular.
Post Reply