The Demise of the CD Album 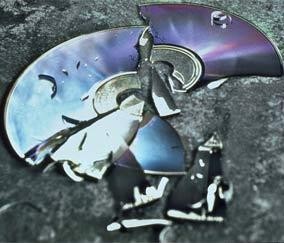 In the 50s it was the rage, the 45 single.  The pop-music industry was born out of the frenzy produced by one-hit wonders and the teenagers that fueled the demand. The singles-market reigned supreme at the cost of quality. Disposable artists were as good as the next big hit and the budding music industry didn't care or want to know about artist development or quality; it was truly an assembly line operation.  LPs were by and large ignored by the mass-market, selling in miniscule numbers compared to its sibling the 45.

Fast-forward a decade, the 1960s brought political and social changes that had a profound impact on popular music and a new mindset was quickly taking shape as technology slowly crept forward.  New styles of music and new bands that produced copious volumes of work were now looking for relevance and permanence.  The one-hit wonders of the 1950s were either brushed away in the upheaval or were transformed into mega-stars.  These new musical forces went beyond your traditional pop single; now rock operas, opuses and interrelated songs were coming to the forefront and such volume and complexity could only be brought to market via the LP format. For the first time the all mighty inferior sounding single was taking a back seat to the LP.  Numbers of singles kept slipping throughout the late sixties in the seventies, the decade that music critics site as the decade of the LP.

The eighties brought a new revolution in technology that's still reverberating today – the birth of the CD.  Lamented by some, worshipped by technophiles everywhere, the CD spelled the end of the 45 and cassette single making the CD album the de-facto medium for music in the late 20th century.  The revolution didn't stop at the software end of things either; again the musical landscape was in flux.  Behold i-Pods, MP3, i-Tunes, wav, Napster.......the digital revolution was in full swing.  Amidst the waves of change, consumer's taste had also taken a turn, the trend for one-hit wonders and disposable music seemed to be making an awkward return.  The flavor-of-the-week mentality and it's conspirator of choice, the single, had been resurrected in digital form.

The young consumer of this brave new world isn't interested in listening to complex works of music.  No, the new, the happening, that's what's in, “if it’s relevant I want it” has become the litmus test for music.  Through the magic of this exploding technology, you can now have that relevant single for about 99-cents (instead of spending 15 dollars for an album CD) all without leaving the comfort of your seat. Ironically, the digital single has done to the CD what the LP did to the vinyl single.

This violent change has led industry watchers to opine that the record industry as a whole is interested in quick hits rather than lasting music or artist development.  The singles market is a double edged affair.  The obvious trend in lower quality recordings and second rate material releases has become rampant. The rush for profit has had an adverse affect in the industry and with consumers.

By and large, consumers still buy CD albums, but in fewer numbers.  According to Nielsen Sound Scan, sales of CD albums have declined 20-percent from last year (112 million to 89 million) while digital singles are up to 288 million from 242 million last year.  These numbers only reflect legal downloads.

This singles-market trend has produced lay-offs, budget-cuts and consolidations in an industry already reeling from dismal sales.  Hopefully this will be a wake up call to the recording industry. The market is in dire need of quality and the digital throw away single and its poor sound quality is not the answer to long growth, consumer confidence and future profits.

WmAx, post: 273690
This sounds like nothing more than an ad. I don't know if you are a shill, or an insanely enthusiastic customer….

fresno1232001, post: 270251
I bought ~15 DVD-As and all of them sounded horrible. That's because most were made by taking old tapes from the 70s and making a DVD-A. Then in fall, 2006 I bought the Beatles “Love” DVD-A and it sounds great. Then I tried an Aix Records DVD-A. BINGO! The owner and chief engineer, Mark Waldrep, PhD in Music from UCLA told me his sound better than most, and is he ever right! They are just fantanstic. He records every performance live and uses hard drives to do it. No artificial reverb, no over-dubs, no heavy digital EQ. So now we see that the DVD-A lossless format CAN be fantastic, when done right. www.aixrecords.com. Try Nitty Gritty Surround, Brand New Opry and Surf City Allstars I get Surround. Also Bach, Brandenburg Concerto. You'll be stunned by the fidelity! So, whole albums are back! I still like LPs best of all and have always thought CDs were utter and complete CRAP. They sound like hell. They are 44.1 kHz, 16 bit word length resolution. DVD-As are 96 kHz, 24 bit word length and far superior to CD. The Aix Records DVD-A are dual disks- DVD-A on one side and DTS 5.1 surround on the other, so they will play in any DVD player. Now, Dr. Waldrep is “migrating to servers” he says. He is starting www.itrax.com summer, 2007. You will be able to download one track at a time. A new phenom. is the “home server”. It has a huge harddrive, and you download movies and music into it. It sits in your media room. They are expensive still, $3,000 and up, but prices will fall. They will probably spell the end to disks for movies and music. Dr. Waldrep feels that both BlueRay and HD will fail, and they should due to the stupidity of the makers putting out competing formats. With a home server, you won't need either one. But try an Aix DVD-A. You will hear the true potential of your system for the first time ever. And if you buy one, you get his award winning sampler thrown in for free. About 18 tracks on it. If you buy over $100 worth, shipping is free.

This sounds like nothing more than an ad. I don't know if you are a shill, or an insanely enthusiastic customer….

..most of what I've read in this thread I agree with…MP3, etc have a place…but not in a high-quality playback system…If the CD isn't going to be the transport of choice for least-best playback..then we need to know what it will be: SACD? DVD-A?..newer versions of DTS or DD?….I don't know, but please bring it on.
Interestingly, after I did some upgrades to my system, I found that I never really appreciated how good CDs really sound if produced well. Go figure…then I might start listening to vinyl again too!
MichaelJHuman posts on May 22, 2007 14:56
I would have some citations. Like some sales numbers from CDs.

I do BELIEVE that CDs are at least somewhat in decline; my own music buying has shifted more to online buying.

But there are some real issues with buying from a source like the iTunes store such their DRM (I believe that might start to change.) Also, while MP4s are great from size perspective, they are a pain in the butt due to the fact I can't play them on all my devices.

The need to manually backup your purchases is annoying. CDs create a nice archive, and sometimes come with interesting liner notes as well.
KC HiFi posts on May 20, 2007 19:30
I agree something needs to be done on the part of the music industry to improve quality. HDCD, SACD, DVDA, etc, etc. Aren't working for the mainstream.

There are thousands of us who demand quality. But the pure and simple fact is that there are millions out there who care nothing about quality only quantity. How many songs can I stuff onto my ipod? Why can't they compress them more so I can fit more on this thing? those are the questions my 13 year-old son asks.

At this point we are outnumbered by the masses. I only hope that soon the trend does go back to quality. Maybe HD radio can help this out. When you get a chance to hear music in it's pure form it is hard to listen to poor quality ever again.
Post Reply