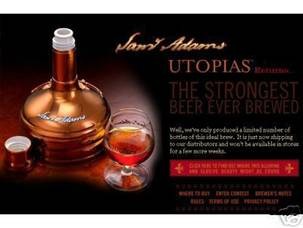 Anxiety got the better of me. The other evening, I requested the company of some close friends to embark on a historic journey of epic proportions, to tap an extremely rare and hard to find, bottle of Sam Adams Utopias dated 2003. Only 8000 bottles were produced. We set forth on this monumental event by sampling three different years of Sam Adams Triple Bock (1994, 1995, and 1997) as delightful aperitifs. While all three Triple Bocks were tremendous, they were completely different than what we were to experience in the Utopias, and were instantly forgotten once the sacred hour of revelation was at hand.

Prior to starting this mission, I acquired eight high quality Brandy Snifters. This style of glass was created for this beer as they provide additional surface area, thereby allowing a full embrace of the magnificent aroma of this unique brew. I searched four different stores until I finally found just the right snifters. After all, the Utopias set me back $130 in July 2003 and it deserved the perfect vessel for consumption.

With the proper chalices in hand, the moment of truth was upon us. The very first thing became evident was that Sam Adams did a much better job of sealing this beer than they did with the Triple Bocks. Even though the three Triple Bocks had been carefully stored on their sides for much of the 10 or so years, the corks were totally dried out and very loose, and each crumbled during the delicate efforts to cleanly remove them. The copper cap that once accented the copper finished brew kettle decanter of the Utopias easily twisted off revealing an additional tightly sealed pop-off cap, indicating that this beer was intended to be stored and aged for decades. There was no loose incorrectly implemented cork to be found.

From the instant the Utopias was awakened, we were enthralled with the delightful perfume aroma that emanated from the freshly opened decanter prior to its pour. When decanted, the bouquet consisted of a delicate fruity fragrance combined with an inviting subtle floral aroma from the proportional use of all four noble hops (Saaz, Spalt, Tettnang, Hallertauer Mittelfruh). A faint maltiness lingered in the background and completed its wonderful bouquet.

Inspecting the Utopias on completion of the pour, the deep rich radiant color was a marvel to behold. The light shined through it like an exquisite piece of leaded Czech crystal as it sparkled and highlighted the brilliant amber hues.

The flavor profile was not at all overly sweat, but instead consisted of fine malt (from the use of Caramel, Vienna , Moravian and Bavarian smoked malts). This was combined with a balancing refined bitterness all in perfect harmony, while finishing with a satisfying dose of warming, but not burning alcohol. At 25% alcohol by volume, this deceptively strong beer is better compared to a premium Brandy or exquisite Sherry as opposed to any beer that I have every known. Even though this beer was aged in Scotch, Cognac and Port barrels, it did not have the overpowering raisin or maple character found in the Triple Bocks experienced earlier. Everything about the Utopias equated to balance and perfect harmony.

We nursed our 3-ounce pours for what seemed to be only a brief interlude, while relaxing on the patio out in the frigid cold evening air. The winter air kept our glasses cool, while the Utopias warmed our bodies and souls as we engaged in dialog about our precious treasure.

Without question, this legendary beverage is now documented as one of my all time, favorite beers. From this romantic encounter, I now have embarked on a new crusade to acquire more of the few 8,000 bottles that have been scattered from their birth place and distributed among the blessed. Day and night, memories of this magic potion continued to consume my thoughts as I daydreamed and reminisced of its delight.

While the Triple Bocks were good, when compared to the Utopias they proved more of a novelty. The Utopias on the other hand, was a serious beverage and convincingly a commendable creation from Samuel Adams that beckoned for well deserved respect. It was certainly meant to be enjoyed with good friends in an intimate setting on a cool winter evening.

The article above was written about bottle number 03357. Since this article, we opened another Sam Adams Utopias bottle number 04325, and found it to be different than the one previously discussed. The newer bottle was darker in color by what seemed to be almost 7 to 10 SRM's and had more of a deep reddish color. In addition, it was a bit drier and had more oxidative character and wasn't nearly as delicate as the one we had earlier. I can't help but wonder if batch to batch consistency is just not there with this remarkable beer, or if Sam Adams intentionally made them different. In about two weeks, I will be part of a vertical tasting that will include all years of the Triple Boch, the Sam Adams Millennium (2000), the MMII (2002) and yet another bottle of the Utopias. I will be with 12 other people in the tasting many of which are BJCP ranked. One gentlemen is even a Master Judge. It will be most interesting to note the bottle number of the third Utopias and see which one it more closely resembles out of the two I've already tried.