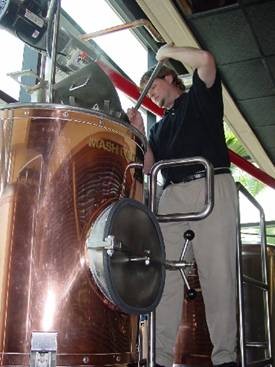 The date, September 16th, 2002; the place, Hops in Winter Park . Due to the awesome generosity of Matt Glass at the Winter Park, Florida Hops, I was able to enrich my meager homebrewing skills by helping brew my first 3.5-barrel (99 gallon) batch of beer. In keeping with my 11-year tradition of home brewing Pumpkin Ales, Matt kindly asked me to collaborate with him on creating our own micro-brewed Pumpkin Ale.

Kudos To The Originator

Up front, I feel it necessary to acknowledge the following mentors who influenced the recipe brewed at Hops. For starters, the Pumpkin Ale homebrew I made 10 years ago was based on a published recipe created by Luke Scott at Hearts Homebrew. About 11 years ago, Luke found an all grain microbrew recipe for Pumpkin Ale in a magazine. During Jury duty, he converted it to a partial mash homebrew recipe, published it in Hearts catalog, and the rest is history. Luke's recipe started my yearly quest for brewing the Ultimate Pumpkin Ale. This quest is my motivational key, driving me to create an ever-evolving recipe that, thus far, seems to improve each year I make it.

Over the years, I have also tried many micro-brewed examples of Pumpkin Ales. The most notable comes from Salem and Boston Beerworks, both located in Massachusetts .

Kudos to the Masters

With absolutely no experience using professional equipment, such as that in Hops, I set forth seeking advice from whom I consider the Grand Master Brewer of Pumpkin Ales. Scott Houghton was the local Brewmeister for Salem Beerworks, located in Salem , Massachusetts . What better location to capitalize on a Pumpkin Ale than the home of Witches, Jack-O-Lantern's, and Pumpkin Farms? Scott and his assistant Jeremy Cross have been brewing this wonderful Pumpkin Ale in Salem for 7 years based on 11-years experience to draw from by the parent brewery, Boston Beerworks. Each year I am fortunate enough to be in the New England area during Autumn, the Boston/Salem Beerworks Pumpkin Ale never disappoints and always makes the trip worthwhile.

Prior to even getting into brewing the beer, or learning about Hops equipment, I sort after useful information. During my multiple phone conversations with Scott and Jeremy, they changed my thinking about a number of procedures I once implemented in my homebrew Pumpkin Ale recipe. For starters, they informed me that it is not important to attempt a conversion of the starches in the pumpkin, as there isn't enough sugar derived to justify the effort. In fact, if you combine the pumpkin with the grains during steep and sparge, you are almost guaranteed to clog your equipment therefore mashing should not even be implemented. I pretty much experienced the fun with clogging my masher during 8 of the 10 years I made this ale, as I once attempated to convert the pumpkin starch during a 90 minute steep with my grains. No matter what equipment I used to sparge, it always ended up getting clogged. Little did I realize that conversion and fermentable sugars was not the point of using the pumpkin in the recipe. Secondly, the myth about having to use only "Jackal" pumpkins is just that, a myth. In fact, Scott and Jeremy told us to use ordinary canned pumpkin provided there are no preservatives. It is recommended however, to caramelize the pumpkin. This can be don e by spreading the canned pumpkin on cookie sheets as thin as possible, and backing in the oven at 350 for 1-hour until it is a dark golden color.

Since the purpose of adding pumpkin to the beer is to derive color and flavor, what better place to extract both qualities than in the boil. At first, I questioned this idea and asked if a 1.5 hour boil of pumpkin will impart a vegetable character to the beer, but I should know better then to have questioned the Masters. Based on Scott's recommendation, we introduced the 38-lbs of caramelized canned pumpkins to the wort at the very beginning of the boil. From the minute the pumpkin hit the boil, Hops Restaurant smelled like Autumn and Grandma's kitchen.

Scott also helped us better understand spicing during brewing. Initially, I was of the impression that the spices should go in last in order to infuse the maximum amount of aroma without boiling it away. Little did I realize that the procedure for adding certain spices is very similar to that followed when adding hops. Scott told us that it is indeed possible to obtain some desirable bitterness from cinnamon thus making it worthwhile to add at the beginning of the boil. He informed us that it is also possible to extract desirable flavors and aromas from the cinnamon and nutmeg by following the same timelines as that followed when adding hops. Scott's lasting comments were when he said, "just be careful and have fun with it." Although I can take that many ways, it made me think of, "relax, don 't worry, have a homebrew."

I realize that no one will continue reading this article unless I show the recipe, so here it is. Keep in mind it is for 99-gallons. You all-grainer's will have an easier time converting this than the partial-mashers.

Now to the Brewing

Well, thanks to Matt Glass and Hops generosity, you can see only the finest ingredients were at our disposal and placed into this brew. Matt and I combined our ideas and created what we hope to be, the best damn Pumpkin Ale this far south of the Mason Dixon . BASICALLY (inside joke for Matt), I informed Matt about how I create the homebrew batches, suggested what we should shoot for in this batch, and Matt processed the information, provided the necessary feedback and scaled the recipe for the 99-gallon batch size. We worked together as a perfect team (right Matt?).

The excitement started with at 9:00am with a 45-minute mash at 165 ° F. We then re-circulated the wort for one hour to set the grain bed and to extract the desired color. The first wort measured at 23.0 degrees Plato (prior to boil). Upon completing the re-circulation, we began the 90-minute boil. At the very start of the boil, we added the 38-lbs of caramelized pumpkin, the first hop addition and the first spice addition. The boil was rigorous with a powerful pumpkin pie aroma that filled the brew room, and the restaurant. With time to kill, I proceeded to the restaurant where I devoured an awesome burger that was the size of half a Texas Cow. Not only has the Hops beer gotten better in the past few years, thanks to Matt, so has their food.

When lunch was over, we got right back in the thick of it. During our intense labor, a farther son team came to the brewery for information on the 'chemistry of brewing.' The 10th-grader was working on a chemistry paper for school, and due to the goodness/kindness/enlightenment of his father, he decided to write the paper on beer. It was a treat to discuss the 'chemistry of brewing,' as they diligently took notes. I wouldn't be surprised if the dad showed up at one of our CFHB meetings in the near future. Besides plugging our club, I sent the dad racing off to Hearts to pick up some Cantillon Grand Cru (thanks Tom Moench ) and George Fix (God rest his soul) book, "The Science of Brewing," two basic essentials in learning about the 'chemistry of brewing.'

Time progressed and we added our flavoring hops and spice with 20-minutes left in the boil. At the 15-minute mark, we added refining agents and yeast nutrients. At the very last two minutes, we added our final dose of aroma hops and spices to the brew. By this time, the restaurant was filling with an intense pumpkin pie aroma and causing me to quiver with joy over what we have created. The final brix was 18.2 Plato leaving Matt fearful of the power we have unleashed with this potentially high alcohol beer.

We completed the brewing process at about 4:00pm , when I had to kindly excuse myself and leave Matt to whirpool the wort for 20 minutes. After whirpooling and extracting the coagulants, Matt cooled the wort prior to introducing it to the fermentation tank where a healthy colony of 1056 Yeast awaited its presence.

Now over one year later, both the bottled and kegged version of the beer improved over time. Flavors are complex and balanced, and the spice and pumpkin character is noticeable, and in harmony with the beer. I managed to stash a 5-gallon keg of it away and all those present are welcomed to indulge and enjoy.

This recipe once resembled the version found in Hearts catalog. Over time, I have tweaked it based on experience and personal taste. Also, this is not the same recipe as the one made at Hops. In the homebrew version, I recommend using small amounts of crystal malt with a healthy dose of Munich and Vienna malts for color, head retention and character. The "biscuit" flavor from the Vienna/Munich malts will provide the pie shell flavor similar to pumpkin pie. I also don 't recommend adding ginger. I have never cared for the character of ginger in beer and don 't think it extracts desirable flavors in any stage that it's added during the brewing process. In its place, I recommend coriander in the finish only, as it adds to the spice complexity in the aroma.

• 6-lbs to 8-lbs of canned pumpkin (without preservatives)

Caramelize the pumpkin on cookie sheets by baking at 350 degrees for about 1-hour. The pumpkin will turn a dark brown color on the top layer. While baking pumpkin, follow standard procedures for mashing and sparging grains. Take the sparge water (wort) to a boil while adding the caramelized pumpkin and first hop/spice addition. Note, this will be a 90-minute boil in order to produce melenoidins and provide a more dextrinis wort. At the last 20-minutes, add the second hop/spice addition. With 15-minutes remaining, add the Irish moss. At the last two minutes, add the remaining hops/spices and remove from heat. After 2-minutes of steeping, cool wort as quickly as possible, add to carboy diluting to a full 5-gallons, and pitch yeast when below 90 degrees. Let ferment for about 4 days. There will be a tremendous trube on the bottom of the carboy. This is common due to the pumpkin and grains. It will be challenging to rack as it may clog the rack tube several times. Rack the beer and let sit about 1-week. Another large trube may develop as there is a lot of things floating around in this beer. Rack again and let sit in carboy for about another 2-weeks. This beer is not a hurry up and ferment. It may take a few rackings to get it to clear out and eventually stop fermenting. When you're confident fermentation is complete, rack, prime and bottle/keg. Most importantly, enjoy.