Online News Overtakes Print in the US 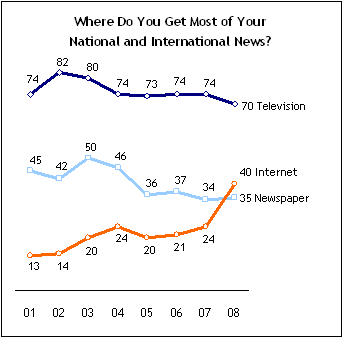 For years the common response to an introduction about Audioholics would include some form of the following: "Oh, are you a print magazine?"

You see, we can actually publish articles in real-time instead of having to line them up 3 months in advance and then being behind the curve in terms of what's going on in the industry. I mean seriously... If Onkyo makes a new product announcement we can post it the same day. A print mag has to beg for the info early (which isn't always possible, or they might get the specs wrong) or consumers need to wait up to 2 months to get that info from the print magazine. Real-time is always better for anything that involves new information and news. Well, 2009 seems to be the year that online news has finally overtaken print - at least in the US.

Remember, it costs lots of money to print paper. So much so, that articles and reviews are limited in terms of how lengthy they can be. Each additional page costs the company money to print... so why not just put out a 3 page review instead of the original 8 pages your reviewer could have written? I've written several reviews and served as a subject matter expert for several print magazine reviews and articles. The first thing they tell us is how many words we're limited to. Content is trumped by resources.

Now the United States (and the general media) seem to be "fessing up" about the shake-up that's been going on in the industry. There has been a steady erosion of the print media for the past 5+ years. I am intimately familiar with this transition. I've been following it and saving headlines and news reports for at least that long as I watched the situation unfold. At first it was difficult to find anyone readily admitting this decline - after all, it affected the very people that report the news. Headlines and articles were often buried deep within the folds of the papers or located in the financial sector (which was more interested in the truth and less in saving face). 2005 seemed to be a major tipping point and it seemed that no one could deny that something was definitely afoot.

Here is just a small sampling of some headlines I've collected over the years:

And my personal favorite:

Now, a Pew study released in early December shows online news has overtaken print media in the US. This is a big deal as it shows that in a year when there has been plenty of news to report about, Americans went online instead of waiting for their daily newspaper. 2007 seemed to be the big year for this change and I suspect the Presidential race was more than a little responsible for helping people understand the real-time benefits of online news sources. Once people understood this fundamental advantage - and I believe they now do - it marks it as all but impossible for print media to recover.

According to the Pew report, young people take this a step further. For those under 30, "the internet now rivals television as a main source of national and international news. Nearly six-in-ten Americans younger than 30 (59%) say they get most of their national and international news online; an identical percentage cites television. In September 2007, twice as many young people said they relied mostly on television for news than mentioned the internet (68% vs. 34%)." What a difference a year makes.

So what do we have to look forward to? Well, as much as I'd like to rejoice over the inevitable (though interminably slow) death of print, the truth is that it's a bit sad to see. Print is dying out, not for lack of editorial prowess or being interesting to read, but for simply not having the forward-thinking chops to recognize their industry was in danger of obsolescence. They opted to ride the sinking ship to the bottom of the ocean rather than look ahead for a potential life raft of opportunity (print mags were notoriously slow to put their content online, and some still refuse to do so in full). We're witnessing the end of an era, and that era was - for the most part - very successful and useful in its day. Will online be able to take up the slack? We hope so, but it will entail lots of resources and editorial content that is compelling and integrous. In short, we've got our work cut out for us and we better buck up.

Yes, there are plenty of readers who will continue to grasp their magazines and newspapers in their tight-fisted hands until they can no longer do so. For us, we've always thought there was room for both. What we didn't understand was the lack of respect print (and many advertising manufacturers) had for online publications. Soon, even the most sluggard of old-school print advertisers will have to recognize that paid subscriptions are drying up fast, with many magazines (and newspapers) doing anything they can to raise and maintain circulation rates. We remember in December 2004 when Ultimate AV mag (formerly Stereophile Guide to Home Theater) moved its operations entirely online.

I get a call every couple months from my local newspaper offering to give me 4 free newspapers a week for absolutely no additional money (I refuse since I don't read it - why waste paper). As for the home theater industry, subscriptions from most can be had for almost free, and not just for industry professionals. We found Stereophile for $10/yr online, and for $8/yr on eBay You can likely find one of these falling out of any HT Mag sitting in a bookstore. It too, was found on eBay The future seems to lie with consolidation and more transition to online models. Of course many sites like Audioholics have current readership that dwarfs our print counterparts, so it is unclear what the fates of these publications will be and how quickly those fates will be realized. In either case, we wish the best for the consumer in the year to come! We have our own roadmap and we'll be implementing it over the next several years to reach our goals. Let's hope the print media is currently working on a plan to stay relevant in a country that is more and more interested in just-in-time news reporting and getting relevant information quickly and accurately.

Discuss This Article
fredk posts on January 04, 2009 14:37
I was first introduced to the internet in 1989. It struck me then that this tool was going to have a major impact on the way we communicate because it eliminated barriers of all sorts.

The shift away from paper is one change that affects the big publishers. The shift towards getting news direct from the source is just as great a long term threat.

The ability to interact directly with the source is a huge shift in opportunity. Don't agree with what a publisher puts on his site? Not sure you understand what was written? Just post a response attached to the original article and lo and behold, you get a response.

Now all I need is a device to read it on that I can:

a) Take with me into the bathroom
b) Swat a fly with
c) Line a bird cage with
d) Not have to worry about my battery
rnatalli posts on December 29, 2008 14:27
All I have to say is it's about time.
Post Reply
See also:
About the author: