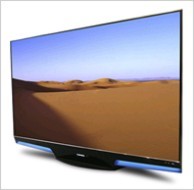 Just two months after announcing the development of the first laser HDTV in February '06 the new display technology will be unveiled in a demonstration this week. Mitsubishi is set to show off a 52 inch model of the laser rear projection TV on Friday at Huntington Beach, CA. This Rear Projection technology uses the same principal as DLP to reflect light. But instead of reflecting a white-light Mercury lamp the new technology will reflect the light of separate red, green and blue lasers. When the technology is finally released to public, which Mitsubishi says will be sometime in late '07, it will be the first ever consumer laser display technology.

Mitsubishi says the laser display is capable of brighter, deeper colors than even film can produce. Frank DeMartin, VP for marketing and product development at Mitsubishi told the New York Times the lasers will provide a greater range and intensity of colors and that the new sets will be made into cabinets even more compact than present rear projection TVs. The cabinets on the new displays will be so slight that the need for a frame will be greatly reduced, the front of the TV will be practically all screen. DeMartin promises the sets will be lighter and use about a third of the power of conventional lamp lit rear projection TVs. Part of the reason is that the white lamps in LCD Rear Projectors or DLP needs to be on all the time but the lasers in Mitsubishi's new sets will switch on and off when required. The lasers will greatly outlast lamps DeMartin added and should last the entire lifetime of the set.

Although laser displays will be new to the consumer electronics market they are not a completely new concept. Lasers displays have been used in lab environments for years and create very colorful bright images with very high resolutions beyond anything seen in the consumer market. But the technology historically has limitations in energy consumption, affordability and the dreaded " speckle pattern ". But Mitsubishi claims to have overcome these problems with low power consumption and a price aimed at competing with existing plasma technologies. The speckle pattern is an annoying spot in the image and a flaw inherent to laser projectors that through existing technologies can only be controlled by de-speckling modulation as explained in the Laser projection patent . It will be interesting to see if Mitsubishi has been able to control this flaw or if it will remain an issue with Laser TV. Before Mitsubishi's targeted fourth quarter of '07 release date for a consumer grade laser display, researchers had estimated the technology was still years away from public availability.