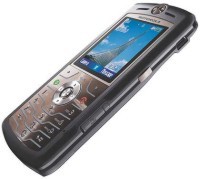 Not wanting to appear biased in the "portable music via cell phone" trend, Motorola inked a deal today to use Windows Media technology from Microsoft in a new line of music phones that would sell right alongside its iTunes phone developed with Apple. I would postulate that the co-development has been going on all along and that Apple simply insisted on being "first to market" with the technology.

Yes they did just announce the new slim SLVR iTunes phone during the Superbowl.

Reuters quoted Chris White, the company's senior director of global product marketing for music handsets as saying that "Nokia will launch between one and three Windows Media phones in the second half of 2006." He also stated that Motorola will keep Windows Media phones as separate products [from the iTunes models].

So the format wars continue - with Microsoft's interchangeable format on one side and Apple's slick, but extremely proprietary "I'm taking my toys and going home" format on the other. It's a strange day when I see myself somewhat rooting for Bill Gates if only to provide more competition and diversity... talk about a switch.

The drive for the new technology has arisen from a desire of many phone companies wanting to open up their own music stores. With the Apple business model, iTunes is the sole source for music purchases and downloads - cutting many large companies out of the deal. With that kind of thinking it's really a wonder it lasted this long.

Another limitation, one that I'm guessing Apple was none-too-upset about, has been storage. Until now, the new cell-phones were unable to truly compete with actual iPod sales, as they were incapable of storing the thousands of songs that an iPod could. Add this and the lackluster marketing of companies who don't stand much to gain from the sales and you may see why the "iPhone" has yet to take off.

The new Windows Media Player phones will be able to download music, sold by the wireless companies, directly over the air as well as via computer software. Some of the talk involves a system whereby if music is purchased once, it will be present for download on a PC as well as for use on the phone - in the correct codec formats as well (hi res on PC, lower res on phone).

If anything, this will (hopefully) also present a fantastic opportunity for cell phones to become more integrated with PCs for backup of contacts, etc.

Since Microsoft now has deals with both Nokia and Motorola, it has a share of a market which includes more than half of the 810 million mobile phones that were sold last year. Nextel, of course, will probably never have any of these features (even though they use Motorola profusely) because they are apparently too cool to do anything so silly as include new features. Nope their push to talk legacy iDEN will have to hold us for at least another decade until they decide to get on an updated network (say one that was built after the cold war.) And besides, there are all of those new Sprint customers to take care of.

But of course, being a Nextel subscriber I'm not jealous or bitter about having almost zero prospects for this new music technology. Nope, not one bit.