Mac Mini Wants a Spot in Your Home Theater 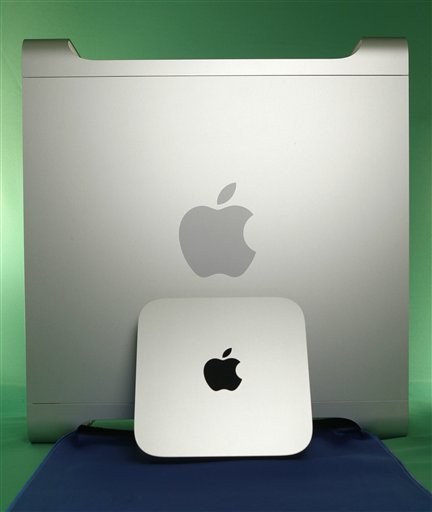 Apple’s new Mac Mini is a miniature desktop computer powered by Apple’s Mac OS X Snow Leopard. Its stature, at only 1.4-inches tall and 7.5-inches square, makes it perfect for a crowded component AV system. The smallest member of the Mac family addresses a few concerns the Mac faithful have had with previous iterations of the device. This version has an HDMI port, an SD memory card slot and Wi-Fi courtesy Wireless N so you can stream HD video and multichannel audio to your home theater system.

There’s something compelling about the ability to stream an HD movie from iTunes or Hulu.com and then switch over to a video game on the same piece of hardware. With roughly the same computing power of a MacBook, which costs $1200, the Mac Mini is the least expensive way to run Apple software.

One troubling aspect to the Mac Mini is you won’t find a Blu-ray player on the device. It’s only natural the group behind iTunes should stands behind streaming video and not any disc format as the home entertainment wave of the future. But for any computer these days with HDMI, Blu-ray is a serious oversight.

One aspect to the new Mac Mini that is very un-Apple in its consistency is a hatch in its underside that lets you upgrade memory. It comes stock with 2 GB of internal memory and that’s fine for the causal user. But if you really want to push the limits of graphics you’ll want to put that hatch to good use.

Pixel pushing power is brought to Mac Mini via built-in NVIDIA GeForce 320M, a powerful laptop graphics processor. It used to be that Apple computers weren’t really for gaming – not much has changed.

It’ll perform fine if you’re playing older games at full speed in high graphics detail. But the most demanding newer games like Cyrsis or Need for Speed: Shift will require a big downshift in detail settings.

But Apple still isn’t a gaming platform, it’s difficult to imagine a gamer spending money on hardware that’s not prepared to run the upcoming Crysis 2 (to be released sometime in Q4).

Apple touts its environmentally friendly design. Although built-in environmental and social consciousness is a positive step for manufacturing, isn’t the idea that we can shop our way into social responsibility what got us into our environmental and fiscal danger in the first place?

But for its part, Apple has created all new energy efficient components in its hardware and has the software to augment it. Energy efficiency and software shutoff features combine to create a computer with a smaller eco-footprint than ever. Apple even says its OS is optimized for energy savings between keystrokes. Unlike those dirty, dirty gaming consoles, the Mac Mini contains no PVC or BFR and of course, Apple is renowned for its recycling program that takes in your old Mac for free.

It’s a step in the right direction for the Apple faithful if you’re looking for something to perform double duty between an Apple monitor/keyboard and your HDTV.

But for most home theater enthusiasts that just don’t get the Apple mystique, it’s just another overpriced AV component. Provided you’re not concerned with running Apple software, you can get all the media-extending capabilities the $699 Mac Mini gives you for much, much less out of a new Xbox 360 – including no Blu-ray player.

BoredSysAdmin, post: 727908
Well, I was about to come back with snarky reply about how Apple remote is using proprietary RF protocol, but I checked before posting such remark, and thou I held it myself - I guess I wasn't paying attention….

Since it is IR - harmony and other universal remotes should be able to replace it as Jeff said…
:o

Thou I still don't consider FrontRow (without addons) to be adequate HTPC replacement.

jeffsg4mac, post: 727898
Jeesh Hopefully if anyone uses it with a remote they will be able to program by a code and not have to spend the $ for the apple remote.

Well, I was about to come back with snarky reply about how Apple remote is using proprietary RF protocol, but I checked before posting such remark, and thou I held it myself - I guess I wasn't paying attention….

Since it is IR - harmony and other universal remotes should be able to replace it as Jeff said…
:o

Thou I still don't consider FrontRow (without addons) to be adequate HTPC replacement.
jeffsg4mac posts on June 22, 2010 15:25

Wayde Robson, post: 727582
Agree Jeff. I'm just seeing it as a move in that direction with HDMI, that's all.

Maybe, they might be testing the waters. Not adding blu-ray as at least an option is kinda short sighted to say the least though.

Hey what the hell is this, I am ragging on Apple. Good grief I must be drunk Actually I have several beefs with Apples hardware. However, most of their software and of course their OS is great stuff.
Post Reply