Lord of the Rings Blu-ray: I Want My Extended Editions! 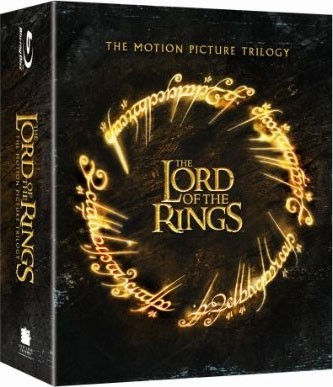 When Amazon add its pre-order page for the Lord of the Rings Trilogy on Blu-ray – Fans of the House of Elrond quickly became a house divided. It’s great news that Warner is finally getting around to giving us Rings on Blu-ray.  But many of us are disappointed that the films available will only be the theatrical versions. Here are the rumors around the Internet regarding the Blu-ray release of Lord of the Rings.

Late last week, Rings fans found out they could put in their order for the theatrical release only of the complete Lord of the Rings trilogy on Blu-ray. But you know how it works; the Extended Editions everyone really wants will eventually follow, it’s a practice called the Double Dip.

This lead to optimistic speculation by the HDRoom.com that Amazon.com might have made a mistake. Cover art on the disc set doesn’t specify whether it’s a Theatrical or Extended Edition. So, HDRoom hoped it might be a dual-version movie disc with seamless branching between the two releases.

Sadly, that’s just wishful thinking. Many are up-in-arms over the double dip and protesting Warner by signing up on Amazon.com’s placeholder page for the Extended Editions and forgoing the theatrical Blu-ray set. But before you get your Mithril girdles in an uproar, just ask yourself: Can you really blame Warner for indulging the double-dip? It’s nothing personal to the diehard fans - it’s just business.

When can you expect the Lord of the Rings Extended Edition on Blu-ray?

The smart bet is that the Extended Editions will arrive late in 2011. That’s when the first Hobbit film is slated to hit theaters. Yes, more Tolkien on the big screen means tie-ins and merchandising that Warner will want to maximize in the form of hype surrounding its return to Middle Earth.

According to Blu-ray.com, director Peter Jackson is saving the extended versions of the films for an Ultimate Rings box set. It’s a good bet it’ll be chalk full of Blu-ray-only goodies not seen on the Extended Edition DVDs.

While Jackson isn’t directing the upcoming Hobbit films he is co-producing with partner Fran Walsh, the duo also worked together on the Rings trilogy. The Hobbit will be a two-part feature with part one slated to hit theaters in late 2011 and part two in 2012. The films are being shot simultaneously in New Zealand, just like the Lord of the Rings films. This time Guillermo Del Toro takes the director’s chair.

The Hobbit is in good hands with Del Toro a veteran of fantasy and action film. He’s the one that gave us both Hellboy movies and arguably the finest fantasy film ever made: El Laberinto del Fauno - released in the US under the name Pan’s Labyrinth.

For Hobbit; Ian Holm and Ian McKellen are rumored to reprise their roles as Bilbo Baggins and Gandalf respectively. And if rumors hold true, Andy Serkis returning as Golum will add irresistible icing to two additional helpings of Shire cake.

Personally, I can’t wait! I’ll hold off buying the theatrical release and patiently wait for the rumored 2011 release of the alleged Lord of the Rings Ultimate set on Blu-ray. This is how I’ll indulge the full commercial onslaught of hype for the upcoming Hobbit films.

Wayde Robson, post: 556167
…
The only use I could see for the Theatrical release is to watch them with my parents or something. As curious as he might be about them… my dad is damned sure not going to spend serious time watching fantasy.

A number of sites have confirmed this. If that means, as suggested here, that they will instead just release the EEs, then that delay is perfectly fine with me.

Two days ago we broke the news, and now it is confirmed: the Blu-ray release of ‘The Lord of the Rings: The Motion Picture Trilogy’ is delayed to 2010. Studio and industry sources have informed our friends at The Digital Bits that the BD trilogy is no longer on the 2009 schedule, and is now tentatively slated for early 2010 (probably March).

No official confirmation of the delay is to be expected, as the title was never officially announced in the first place.

No official reason for the delay was given either, although The Bits believes that Warner Home Video “didn't want Rings to get lost in the crowd”, considering that the studio “already has a number of big 3rd and 4th quarter titles coming on Blu-ray this year” (such as ‘The Wizard of Oz’, ‘Gone with the Wind’ and ‘North by Northwest’). ‘Lord of the Rings’ fans are already replying that it is likelier that those classic movies would be the ones to get lost in the crowd if released at the same time as the Tolkien trilogy filmed by Peter Jackson.

There is no information as to whether the delay will entail any change in release details, or whether the studio will use the additional months to include the extended versions of the movies in the Blu-ray release, as demanded by numerous enthusiasts here and elsewhere.

Lordoftherings posts on August 01, 2009 08:59
I will wait patiently for the Extended Editions.
j_garcia posts on July 29, 2009 16:03
The end of the first movie bugged me more than anything IMO, but there were a lot of things that were not just changed, but actually did not even happen. There were some items that they say came from the archives, which I have not read, but I still don't see how they felt those things were significant enough to add to the movies while they were changing things around so much? Despite the errors, I still liked the movies.
darien87 posts on July 29, 2009 12:00

davidtwotrees, post: 602823
I watched enthralled at the movie theatre as my fav books of all time unflolded and came to life in front of me on the big screen…………I was amazed at how close they followed the first book. I even forgave Pete when it wasn't Glorfindel, elven lord, that showed up to succor the hobbits at the Ford of Bruinen from the Nazgul-Arwen Evenstar (Liv Tyler) was a pretty hot chick and I thought it was a nice touch. Same time next year I am watching the second movie…….and it starts deviating from the plot big time I sat stunned. At one point I booed (when Aragorn is knocked off the cliff by an orc and everyone thinks he's dead…..(as IF!), or how about when the troop of elves! show up at Helm's Deep…..the only elves that showed up were Elrond's Son's along with 30 rangers, close kin of Aragorn…….) I could go on but I can't even watch the movies. I've tried. The characteres and scenery are so wonderful…….it's just a shame that the plot was butchered so greatly. I understand there is logistics and editing and cost to consider in any movie and that books can describe in much greater detail than a movie can. Still, the plot deviations I mentioned didn't make any logical sense. As if Pete Jackson could improve upon Professor Tolkien's story??!!!!
Just my 2 cents……… Hopefully the Hobbit can keep to the story somewhat.

As a life-long fan of The Lord of the Rings, I was a little disappointed with the movies. But I thought that overall they did a decent job. One thing that really bugged me about the first movie was how they changed the end. Why the hell did they change it to Aragorn, Gimli and Legolas watching Frodo sail away, with that, “Frodo must follow his own path” crap?!?!? The ending of the book was much better.
Post Reply