The computers, the phones…it is all about kids. Ordinary people can't (don't) use 20% of their computing power. Regular folks don't run around taking pictures with their camphones and IM only occasionally. They couldn't program the VCR so what makes engineers believe they can program a PVR?

It's the kids that have the gadgets and they use them…all! Their entire room is a multimedia center. Spinning the yarn about the home entertainment solution sounds fantastic but reality seems to be the same as corporate IT departments attempting to develop the utopia of backing up everything on the network and recentralizing company data (remember we used to have mainframes and terminals, not hundreds of PC islands)…it's a great idea but my data/content is different, special!!"

According to a recent report by the Kaiser Family Foundation they use all the things we buy for them - TV, videos, music, videogames, computers, cameras and more. Kaiser found that they cram more media content into an hour than we ever thought we needed. They watch a lot of TV (regular and recorded), listen to music, use their computers on-line and off-line, play videogames, read and watch movies and do much of it at the same time.

And that multitasking also includes hanging with the parents, talking on the phone (surprise!!), physical activities, hobbies, schoolwork and chores. Added to that is being in school, commuting and sleeping. BAM!!!! They suddenly packed 27.5 hours in a 24-hour day.

Maybe - just maybe - kids aren't so bad. Just a little busy. A little preoccupied digesting their content. If only they could expand their multitasking to cleaning their rooms!!!

Time for the Big Game 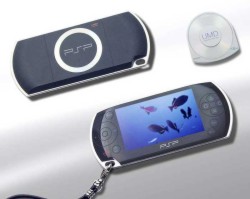 The battle of the titans is between long-time leader and apparent underdog Nintendo and home player, come from behind Sony.

In typical fashion Sony has whipped the market (and media) into a feeding frenzy to get ahold of the new PSP (Figure 2). And yes it's a pretty good portable game system.

It is "almost" as good as the Atari Lynx we helped the Trameils launch eons ago. In 1989 it had an insanely great color display. It had some of the best games available like Ms Pac-Man, Roadblaster, Gates of Zendocon, Blue Lighting, Slime World and more. Surprisingly, the system still has a huge loyal following of men and women who develop and trade games. There's a whole underground of people who repair and nurse systems back to health. 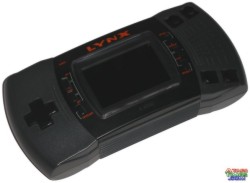 Granted the Lynx didn't (and doesn't) have games you can play with 10-100 of your close, personal friends around the globe. But you pull one of those little suckers out - even today - and you can draw a crowd of young and old alike. That's because it was a game system…not a world of entertainment.

In addition, how do you get all of those other gamers to join in? Send out a game rendezvous message from your WiFi Sony Vaio? Or call them on your all-in-one Samsung or Sanyo cellphone?

Just as with ultralite notebooks, DVD burners/recorders and cam/message/video/cellphones, once the initial "new and sexy" has worn off it's all about the software. If more people are designing for Microsoft and the XBox than for Sony and the PS2 there will be fewer options for died-in-the-wool gamers and their portables.

Rather than their Universal Media Disc (UMD) for their movies (2 ½-in cartridge disc with no write-once or rewritable media in the offing) why didn't they do what some of the studios are doing and use miniDVD technology that already is widely available? Simple, it would cut down on their control, their royalties.

Of course you can also use the PSP as a slightly bulky music and photo player…as long as you use their proprietary memory stick format rather than SD or even their regular memory stick. The Sony Hydra still doesn't talk to itself so Sir Howard has his work cut out for himself.

For each generation there is a time…or in this case a game system.

But the Lynx is still a helluva system!