Subtitle: What to Get the Kid Who Has Everything

Christmas is here, so what are you getting your kids? I know, I know, they probably gave you a very specific list with UPC codes and item #s. But what about those poor parents who actually have to make a choice this Christmas? What do they get? MP3 player? (he already has three)... that new computer game that just got released (he downloaded it three weeks ago). No, what you need is something so different that no other kid on the block could possibly compete with a product so entertaining. In fact, you want something so cool, that the neighbor kids will flock to your doorstep just to get a glimspe of your child's new whatsamagadget (it's a word, look it up). You need a gift that defies the laws of common-ness and typicality (OK, I just made that one up). You need a gift that even defies explanation.

Now, when somebody invents something so radical it defies explanation, you just have to get in there and take a look. I found such a gift and we'll look at it today (you can thank me later while you're cleaning up muddy floors and serving kool-aid to the neighbor kids). StikAx, as a company, came about from a father's frustration at seeing his children struggle through complex musical theory and lessons. He felt there simply must be a better way to interact with music as part of a looser, more fun and interactive experience. Personally, I think he just got tired of not finding unique and creative gifts at Christmas time - but we'll stick with his story.

The StikAx, according to their own description, is a "free-floating joystick with ten buttons that are programmed using a drag and drop desktop software called TrakAx. The TrakAx software comes with than 450 pre-recorded video and audio loops and beats. The programmed buttons, once programmed, enable users to easily mix and record them all."

In reality it's such a bizarrely unique device that it defies simple explanation... For instance, most electronics or music products can be summarized like so:

Now try that with the StikAx:

The thing defines explanation... but I'm still going to try.

The StikAx is a two-handed trigger-fest of buttons... a piece of hardware out of a cool science fiction movie that has lots of places to push and slap and even an infrared "beam" - all of which can be programmed to hold and trigger audio samples or video clips. You launch the TrakAx software, drag and drop music loops, video, or even your own recorded sounds (my favorite) to the button assignments and enable the StikAx... Then you play. And you play some more. 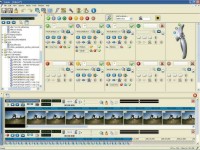 You can even plug in multiple StikAxs (StikAxi?) to a single PC and jam or collaborate with a single music piece. Mixes can then be saved to all the usual audio or video file formats for sharing with friends, or just people you see on the street (you'll probably have so much fun when you first get it that you'll be handing out demo discs to your barber or the local FedEx guy). They'll all take the disc, too, because it will include the royalty-free "Ministry of Sound" video clips of hot babes that comes standard with the StikAx (now all of the neighbor kids coming over seems more realistic, doesn't it? I thought so.)

So, now that the Xbox 360 is sold out and you've gotten over your bitterness (and written all those nasty letters to Bill Gates) you know what the most ambiguously hot item to get for Christmas this year is.