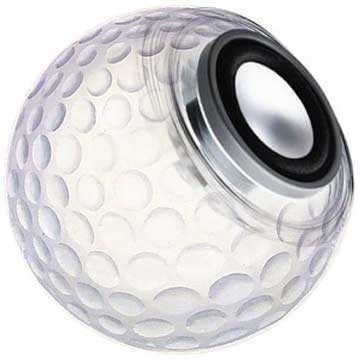 Back in the 60s and 70s stereo systems were judged not necessarily for their fidelity, but for the size and number of their woofers. Just take a gander at just about any speaker system back in the day and you'll see the 3- and 4-way, 15-inch monstrosities that people used to gloat about and play all that great classic rock music on. It was the "in" thing - and, in fact, in many cases it did represent the best that was available at the time (shudder).

Fast forward another decade or so...

Speaker designers started to mature. Designs changed. Speakers started taking on a  whole new look - but were stopped from truly progressing by the hard-edged, pancake-flat, compressed garbage-music that was the 80s. Yes, any true advances were stopped dead in their tracks by the "loudness" fad which came into vogue before Madonna made that term into a pop hit that climbed the charts (seriously, was there ANYTHING redeeming about the 80s?) The 80s stopped speaker designers dead in their tracks and redirected their energies where the money was: Boomboxes. Don't believe me?  What kind of products did you see making their way into almost every store in the country... Into movies. Into music videos. They were BIG. They were UGLY. And they were LOUD. Remember when "ghetto-blaster" would not have been deemed a racist term? These fidelity-wrecking devices typically had two paper tweeters, two paper woofers, a couple of cassette decks, AM/FM tuner, graphic EQ and ran on about 16 'D' batteries (for about 1.5-2 hours max if you cranked it up. Kids could be seen walking the streets with these gargantuan distortion-generators on their shoulders pointed directly at their own ears. If they had gotten two and wrapped duct tape around them I suppose these would have been the first hi-fi headphones.

The 90s brought some much-needed sanity to the industry and people started to think in terms of reduced sizes. LPs were all but gone and the CD was rapidly replacing even the cassette as the medium of choice. Fidelity was finally starting to matter again, though grunge-rock attempted to keep a damper on the music industry. Still, there was a ray of hope and bookshelf speakers really started to hit the scene with a vengeance as subwoofers, though developed in the 60s by the now defunct M&K, really began finding their way into home theaters. Indeed, the home theater revolution began in the latter part of the 90s as laser discs, Dolby Surround and DVDs hit the scene.

What happened next was the most egregious overcompensation that has hit the consumer electronics industry. Instead of continuing to focus on fidelity, the leftover "me" generation of the 80s entered their moneymaking years and demanded that aesthetics supplant quality as the dominant metric. Cube speakers were introduced to the world around 1996 and somehow convinced people everywhere that decent "boom and sizzle" should replace an accurate reproduction of audio in the home.

Editor's Note
We don't have a problem with cubed speakers or "lifestyle" products, however we are making a point that the industry as a whole seemed successful in brainwashing the masses that smaller was better during the latter part of the 90s - a state of mind that is still being battled today in home electronics and which is creating a new breed of products that have completely eschewed quality in favor of form over function.

This brings us to the case in point. Sony recently announced its new Bravia Theatre Micro System, or DAV-IS10, with its five tiny speakers. And we mean TINY. Using a microscope (OK, they aren't quite that small) you can see that the speakers measure a scant 2-inches in diameter - about the size of a golf ball with a headache (~2-inches cubed including the tiny stands). The speakers are rated to 50-watts, though there is no way they can possibly handle any sort of program material below 300Hz at that power rating without generating lots of distortion (Distortion figures shown on Sony's website place it at about 100x accepted and typical levels). Even the combination receiver/DVD player is smaller than standard, coming in at about half the width of other AV components. The upside? Sony's new product is compatible with their Wi-Fi and Bluetooth audio streaming adapters and their TDM-IP1 iPod dock. The DVD player even upconverts its output video to 720p/1080i via HDMI and there is an auto-calibration and setup system (with mic) included in the price.

The price? About $800 for the DVD player/receiver, speakers and a "subwoofer" (we'd call it a bass module since it needs to handle frequencies well into dialogue range.)

$800? Hey, that's not bad - maybe I can buy this cheap stuff instead and take up another hobby... like golfing.

gmichael, post: 750756
We ask that question because music and HT is important to us. Some people never turn on their stereo and would be happy to use the speakers in their TV for HT. There are plenty of people who would buy these because the look cool, and then never use them.

Fowl, post: 750753
I bet that these things will sell, there are always ones who will think that they are cute

But how long can they live with the sound these things will produce?

We ask that question because music and HT is important to us. Some people never turn on their stereo and would be happy to use the speakers in their TV for HT. There are plenty of people who would buy these because the look cool, and then never use them.
Fowl posts on September 13, 2010 17:17
I bet that these things will sell, there are always ones who will think that they are cute

But how long can they live with the sound these things will produce?
gmichael posts on September 13, 2010 14:03
Golf ball speakers wouldn’t be so bad if they added some football speakers to keep them company on the shelf.
Maybe a few basketball subs around the room? (And a box of 12 golf balls as the center channel)
Post Reply